Moroccan Couscous with Beef and Vegetables 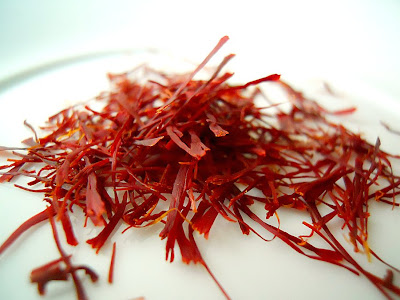 In late graduate school, I dated a man who was friends with the poet Craig Arnold.  Thus, I cannot say that Craig and I were friends, but we were friendly, and our circles overlapped, or at least our orbits would sometimes cross.  I liked him; he was funny, smart, and sometimes quite silly.  Later, when I moved to Denver, I went to see him read at the University of Colorado.  Craig didn't really read as much as he performed his pieces--often closing his eyes, moving his hands as if he were signing the words rather than speaking them, and then sweeping one hand over his bald head.  After the reading, I said hello to Craig, and he hugged me as if we were long-lost friends.  That was the last time we ever spoke.  Since I began teaching a Literature of Food class, I have always included two of his poems, "Hot" and "Saffron," on the syllabus.  These two poems are full of a seductive longing for what either has been lost or was never really even had in the first place.  Craig died almost two years ago.  He was hiking a volcano rim, and it is presumed he fell.

Whenever I make something with saffron, I think of this poem--even if I am not making paella.

The recipe is written in your voice:
Saute the rice to the color of a pearl
in oil flavored with pepper, cinnamon bark,

bay leaf and cardamom, the small green kind.
Simmer until the spices have all floated
up to the top--if you want to, pick them out.

Just before it's done, stir in the saffron
crumbled and soaked in milk.  Such frail red threads,
odd how they bleed so yellow, so contrary

to what a purple flower's genitals
should look like.  It was in a dirt-poor dive
somewhere in Spain that I had my first taste

of paella--how anything could cost
so much, I couldn't bring myself to believe
until you brought me out into the fields,

the ragged sweeps of autumn crocuses.
Not like the ones I've seen breaking the frost,
clumps of three or four, with the forced cheer

of things made to wake up too early
--these were a paler purple, less audacious.
The harvesters were children, mostly girls,

working their way in no special pattern
from bloom to bloom.  One of them let me plunge
my hand up to the wrist in what she'd gathered

--they felt like bird's tongues sticking to my skin,
spotted with pollen, limp, bruised and damp,
with no smell to speak of.  That handful dried

would not have covered my fingernail, and that
from a whole acre.  Maybe it ended up
in your kitchen, in one of the many dishes

you taught me how to make, and which we never
ate more than half of--our tongues couldn't absorb
that much, so dense and yet so delicate:

we'd dull the taste with smoke, knocking the ashes
into the champagne flutes you had shipped back
from Murano, on our way up to bed.

There can't be that much saffron in the world
--as if to think it passed through my hands twice
would make it all appear less of a waste,

the wild, endlessly nuanced fugue of flavor,
so much variety, so much to spend.
Later, at the end, when I asked you what

you wanted if it wasn't me, you smashed
the dark brown vial across the counter, swept
spice and glass into your hand and said

This is my gold standard, my one measure
of value, the smell of money burning
--anything more expensive would be illegal.

I couldn't even begin to afford your taste.
My fingers, stained gold with its dirty sting,
still look to me like those of a small brown hand

all for a fleeting pungency, a touch
of yellow, all to prove how much
attention you command. 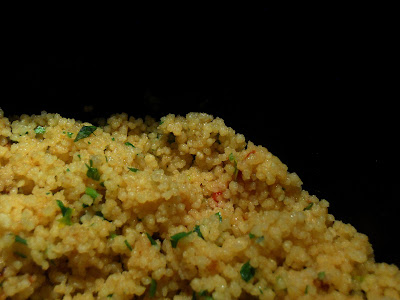 And so, I had the opportunity to remember this wonderful poet a little bit as I made another saffron dish.

The recipe that follows is hardly authentic, but I took a class on Moroccan cooking many years ago, and this is one of the recipes that has endured as part of our repertoire.  While it does take a little while--set aside an hour and 45 minutes for cooking--it is not a difficult recipe at all, and it's a nice twist on the somewhat standard beef stew, this one with raisins all plumped up with cinnamon and saffron. 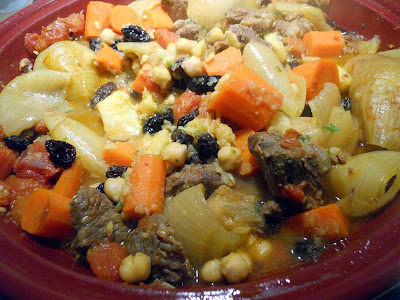 And while the stew simmers, you have time to read the poem again. And then again.  It's that beautiful. 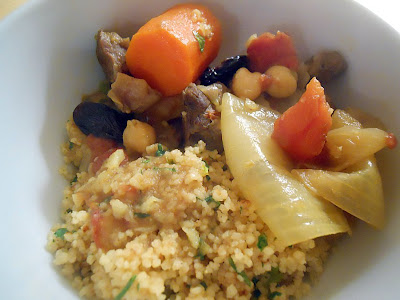 One Year Ago:  Potato, Leek and Fennel Gratin

Instructions:
1. Place the meat in the bottom of a large saucepan along with 1/4 cup butter, salt, pepper, saffron, turmeric, garlic onions, cinnamon sticks, and tomatoes.  Cover and cook over low hear for 10 minutes, stirring occasionally.  Add 1 quart of water and bring to a boil.  Cover and reduce the heat to medium-high; simmer for one hour, adding more water if necessary.

2.  Add the carrots, ginger and potatoes or squash to the meat broth and continue cooking another 30 minutes.

3.  Add the chiles, raisins, and chickpeas to the broth.  Return to a simmer and cook, covered, for another 10-15 minutes.

4.  When the meat mixture is close to being ready, either steam the couscous directly over the simmering meat mixture or drain 2-4 cups of broth from the saucepan.  In a small saucepan, boil the broth, add the couscous.  Immediately turn off the heat, cover the couscous, and let it sit for 5 minutes.  Fluff with a fork, add remaining butter and chopped herbs and season to taste with salt and pepper.

5.  Serve by mounding the couscous onto a large serving platter; spread it out to form a large well in the center.  With a perforated spoon, transfer the meat and vegetables to the well.  Taste the remained broth for seasoning and adjust with salt and pepper.  Moisten the couscous with the broth.
beef Carrots Chickpeas Chiles Garlic Lamb potatoes Raisins Saffron Squash Tomatoes