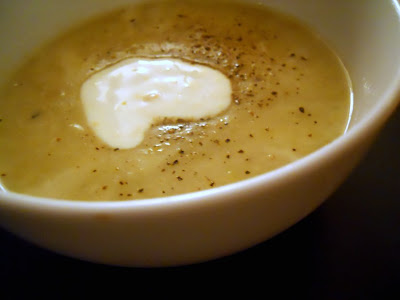 It almost seems as if this recipe from Fields of Greens (the second Greens Restaurant cookbook) was fated to be made.  It uses celery root, leeks, potato and orange:  all four ingredients to be found in this week's CSA box.

I am in love with celery root, also known as celeriac.  If you can find it, I recommend it over what we think of as celery in almost every cooking occasion (however, if you need it raw, celery is almost always better than celeriac).  Celery root is cultivated for its potato-sized root, rather than its woody stems and leaves, while celery is cultivated for crisp stems and leaves rather than its shrivelled root--thus, they are distinct vegetables all together.  Celery root has a tough outer surface that needs to be sliced off or peeled before cooking, and the flavor of the vegetable itself is distinctly celery, but a bit lighter and perhaps paradoxically more pungent. 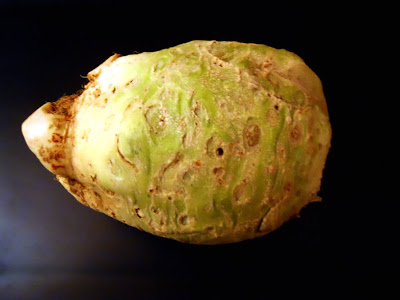 Okay, here's the kicker with celery and celery root.  They are old.  People believe that celery and celeriac are the same as selinon mentioned in The Iliad (book 2)--which the horses are chomping on.  I am currently teaching The Odyssey, so I am enamored of these 3000-year-old books.  Both books are filled with food, and I find my mouth watering whenever Telemachus or Odysseus sits down to another lavishly-described meal--perhaps a different blog might be "Cooking from The Iliad and The Odyssey." 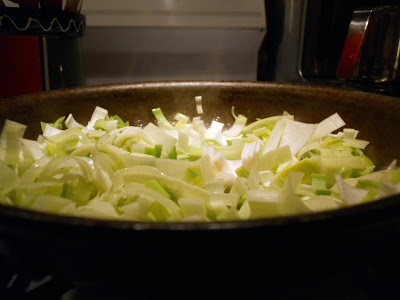 Anyway, celery and its root in their wild forms, as they would have been 3000 years ago, were intended as a medicinal or flavoring plant and as equine feed.  With humans, it was used to treat colds, flu, digestion problems, and water retention.  It wasn't until the 1600s that the French and the Italians risked thinking that the whole vegetable was edible.  Thus ensued much cultivation to find just the right taste.  Since then, this poor vegetable has suffered the sad position of mainstay in the Negative Calorie Diet and the tragic role of The Log in the Ants-on-the-Log lunch menu.  This is a vegetable with a history; celery deserves so much more, people. 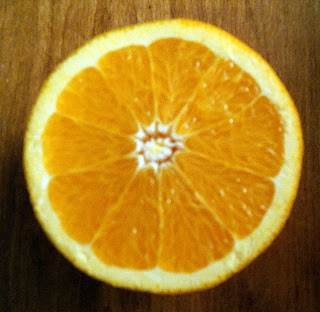 So I say, let's sing the praises of celery and celeriac and use them both more often. I liked this little soup--as it was a fine twist on the standard potato and leek.  But, for all my heralding of the celery root, the crème fraîche was really the hit--the sweet acid from the oranges was just right with the soup.  I admit, I did not have any crème fraîche and didn't feel like running to the store, so I made a sour cream/yogurt concoction.  It was hardly authentic, and many might gasp and clutch their pearls to hear that I sacrilegiously destroyed the creme base.  However, it was still tasty.  And I stand by my decision, just as I stand by celeriac.  Here's to warm winter soups.  Enjoy. 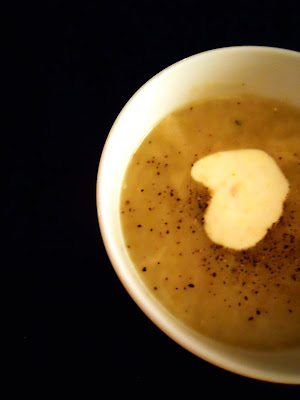 2.   While potatoes and celery root are cooking, heat olive oil and butter in frying pan. Add the leeks, salt, and a few pinches of pepper. Saute over medium heat until the leeks begin to soften, about 3-4 minutes. Cover pan and lightly steam for about 10 minutes. Add the wine and simmer uncovered until the pan is almost dry.

3.  Remove bay leaf from the potato and celery mixture.  Add the leeks to the potatoes and celery, and blend in a food processor. Return to pot, 1-2 cups stock to reach the desired consistency. Cover and cook over low heat 20-30 minutes. Season with salt and pepper to taste. Add the cream just before serving.