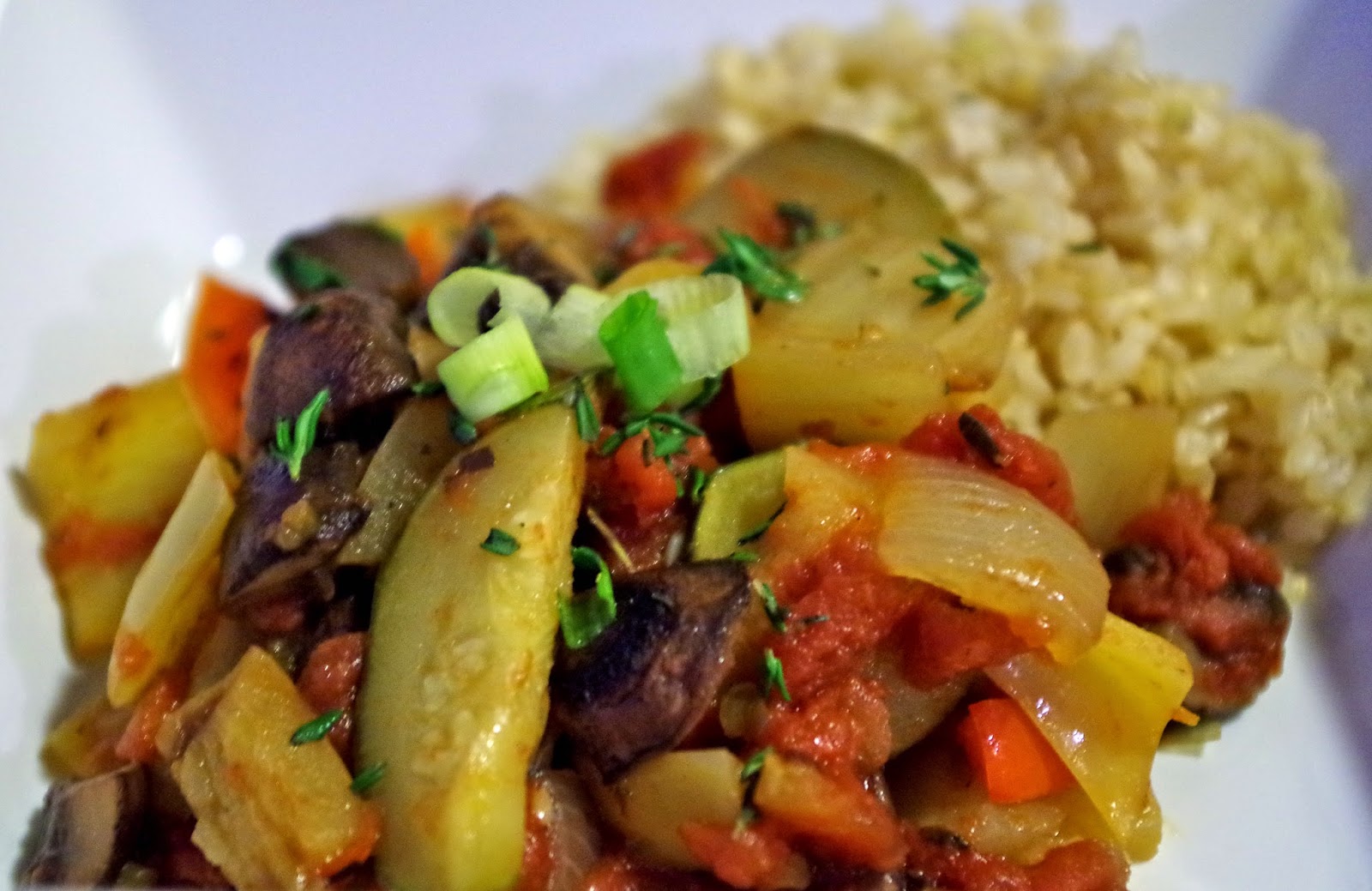 Do you need something satisfying to take to lunch this week?  Well then, set aside some time now at the end of the weekend to compose a little batch of this Creole Mushroom and Pepper Stew.  The last of the season summer vegetables are singing their swan song until next year; autumnal veggies are crowding out the tomatoes and bell peppers both in the CSA box and at the farmers markets.  Some parts of the US are experiencing the bracing chill of autumn (while California remains drought and heat-ridden).  In other words, it's officially fall. 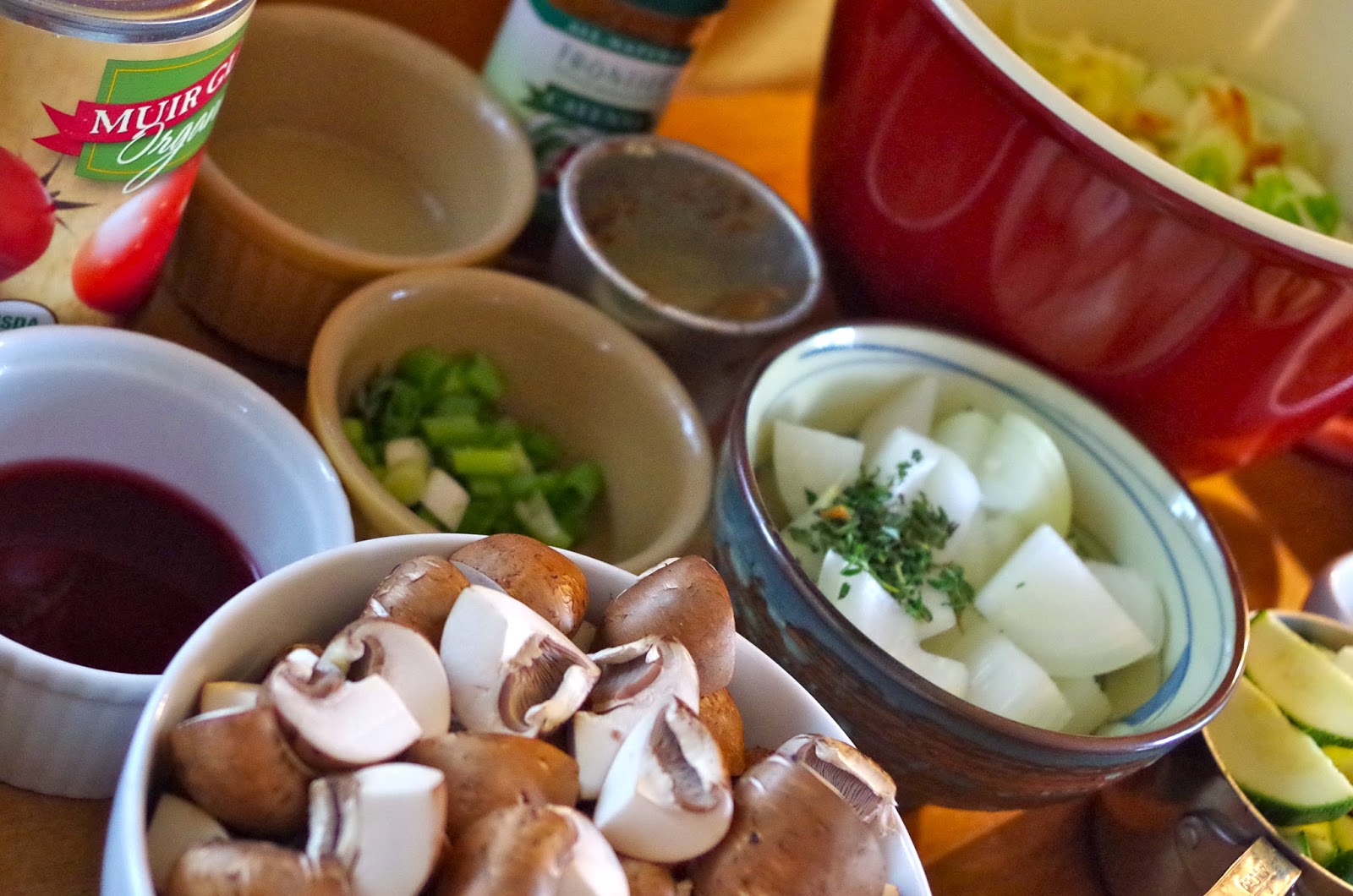 While this recipe does require quite a bit of preliminary chopping, it comes together easily and quickly. Admittedly, there wasn't much that made this particular dish "Creole" other than a little heat from the cayenne and the hint of thyme (and it uses only two of the "Holy Trinity"--bell pepper, onions, and celery).  Perhaps the addition of paprika and celery would kick this into Louisiana territory.  On the other hand, it was quite tasty as is. 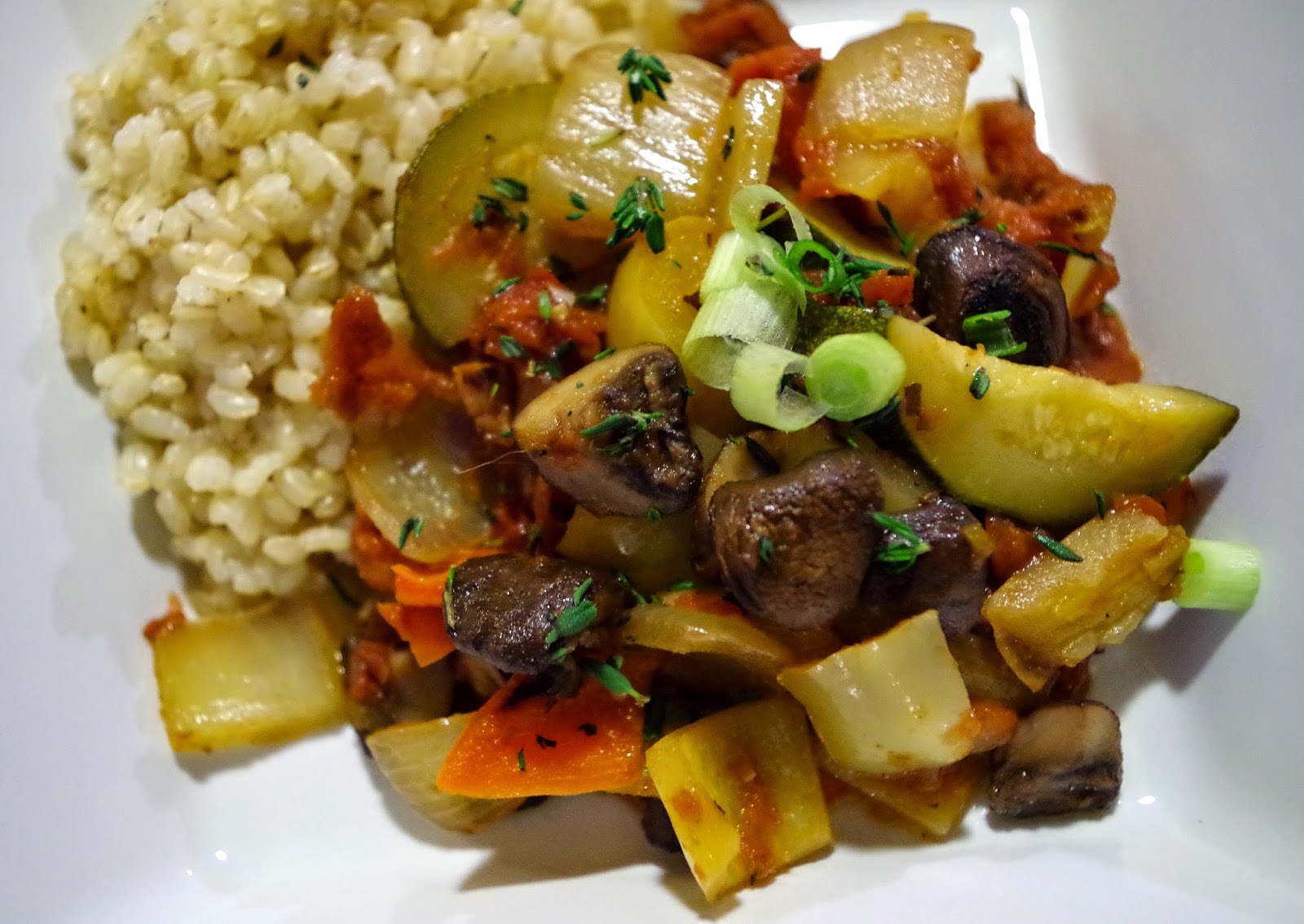 Out of curiosity, I started to wonder what was the difference between Cajun and Creole cuisine from Louisiana, and I happened upon a couple of great articles.  Both Cajun and Creole cuisines share an ancestry with that of the French, with nods to the Spanish, West Africans, and Native Americans. Creole food is often thought to be a little more "high brow" than Cajun food, often because Creoles were/are more urban than their Cajun kin; traditionally Creole food has more layered spices, uses butter and more dairy products, and uses tomatoes--in part because access to these foods was traditionally easier for a wealthier, often aristocratic, urban dweller. Nineteenth-century Creoles had more access to markets and servants (read: slaves), and thus Creole food often takes more time to compose than does Cajun food.  However both cuisines balk at the over-spicing (usually via cayenne) and assert that, like any other cuisine, it is the combination of flavors and the process of layering them just right that produce their signature flavors.

So I am not sure, now, if one can call this Creole stew at all.  I have thoroughly talked myself out of it.  But I do think you can easily call this a tasty and spicy Mushroom and Pepper Stew. Served with a batch of brown rice on the side, this recipe lasted for a week of lunches, and they felt healthy and hearty. It's not a glamorous dish, but it is one that will stick to your bones as we move into the chill of autumn (which I am still, not so patiently waiting for). 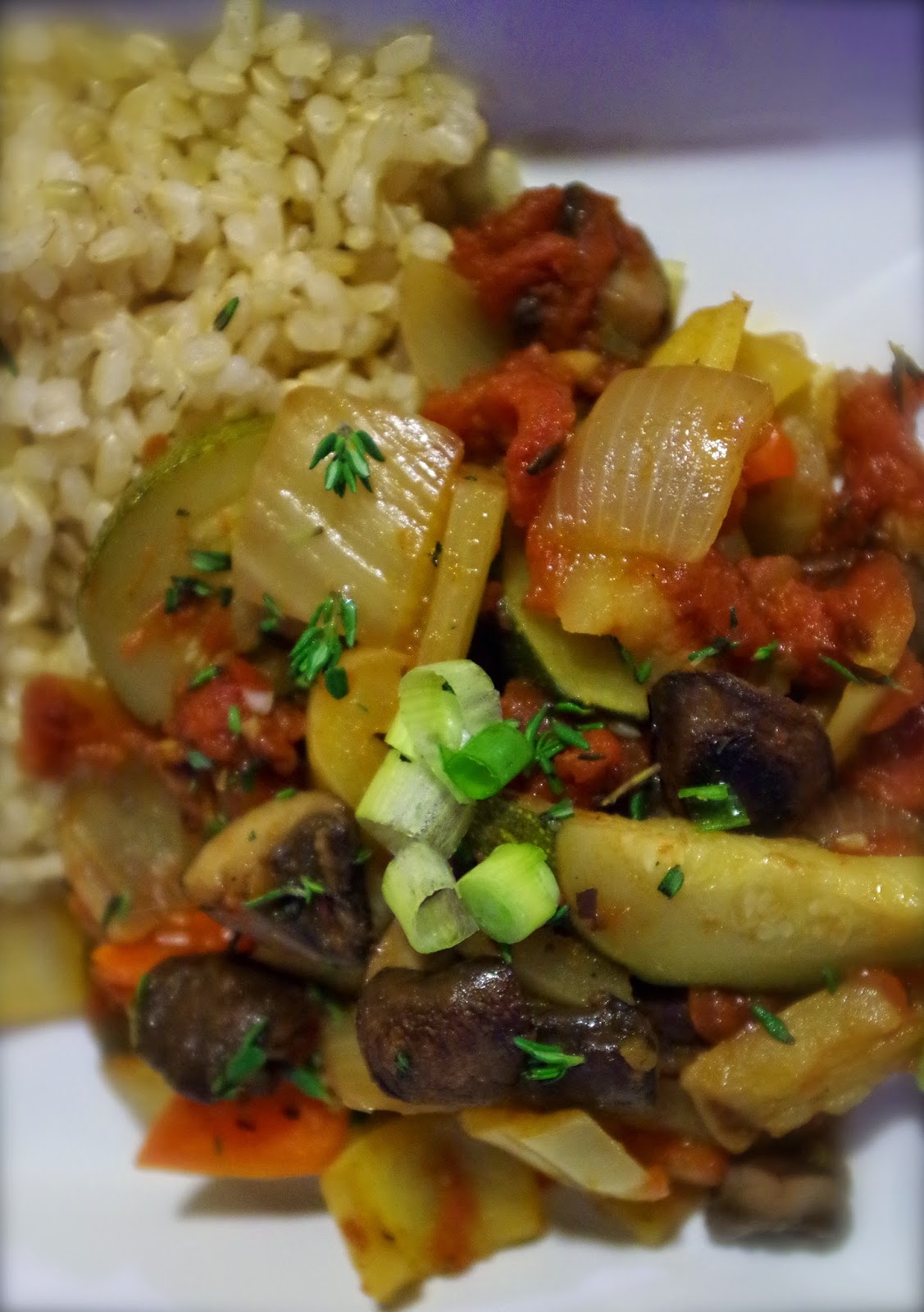 *Somerville recommends roasting the tomatoes as they will add even more flavor.  However, I used fresh tomatoes (and I didn't even peel or seed them).  All was right with the world.


1. If using fresh tomatoes, move on to step 2. If you're using canned tomatoes, simmer over low heat while vegetables are cooking to reduce acidity. If you're roasting them, preheat the oven to 250 degrees. Core the tomatoes and cut them in half crosswise. Place the tomatoes cut side down on a baking sheet lined with parchment paper.  Roast for 2 hours or until the tomatoes are very shrunken.

2.  Heat 1 tablespoon oil in large skillet; add mushrooms, with some salt (1/2 teaspoon) and freshly ground black pepper, and sear until golden and browned (about 7 mins). Add half garlic and wine, stir to loosen pan juices. Reduce the wine until nearly dry and transfer the mushroom mixture to a bowl.

4.  Add tomatoes and mushrooms. Simmer uncovered over medium low heat for 20 minutes. Season with more salt and cayenne if needed. Add scallions, fresh thyme and lemon juice just before serving (possibly with a bowl of brown rice or couscous). If the stew still tastes a little acidic (depending on your tomatoes), add a few pinches of sugar.