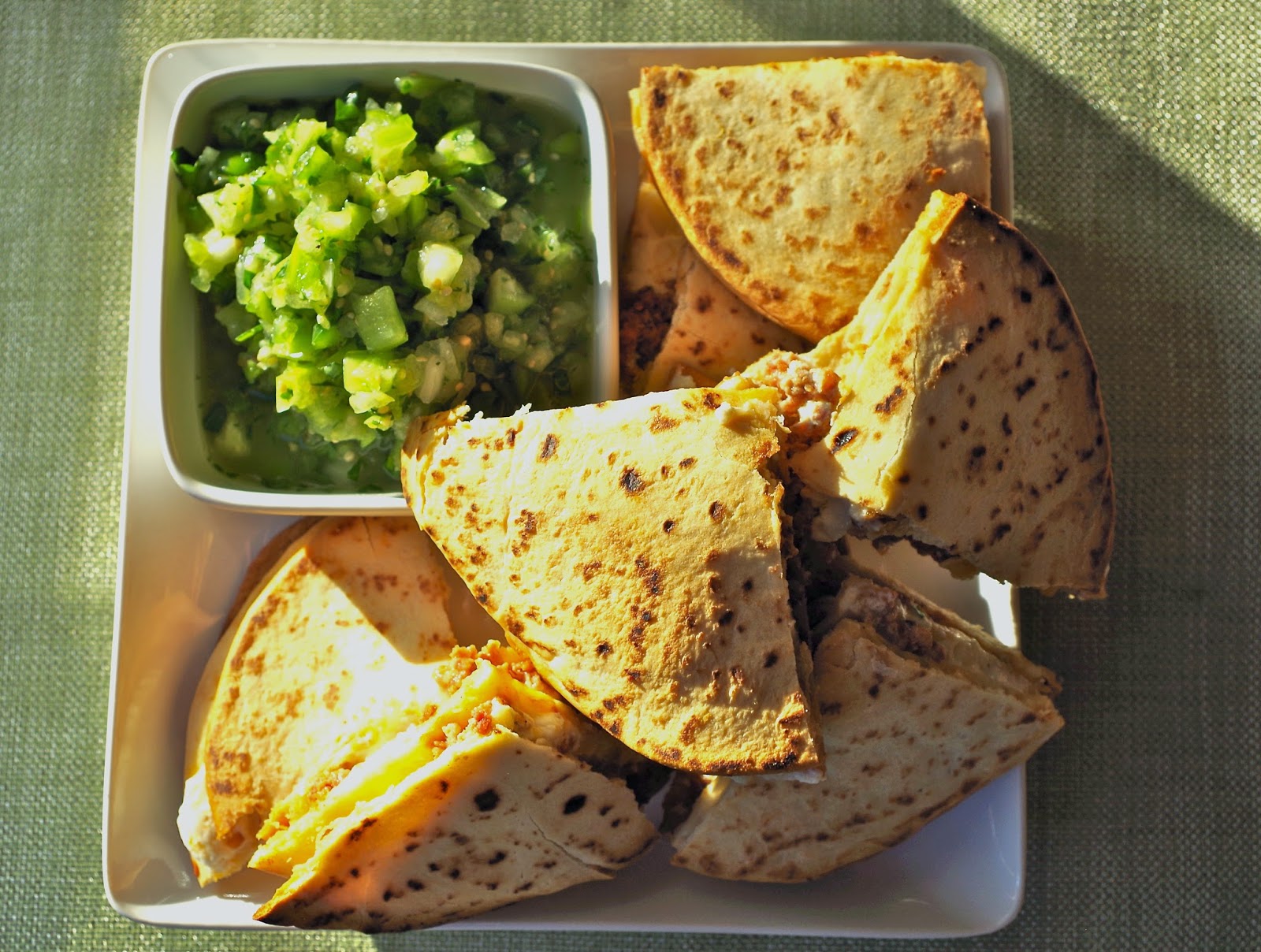 It's October baseball, people, which means that, as a Giants fan, I have bitten my nails to the quick and I have cursed the Cardinals--an easy thing to do because I have always professed that I am a Cubs fan first and a Giants fan second.  Lucky for me, the possibility of the Cubs and the Giants battling it out any time in the near or even distant future in the National League Championship Series seems pretty slim. 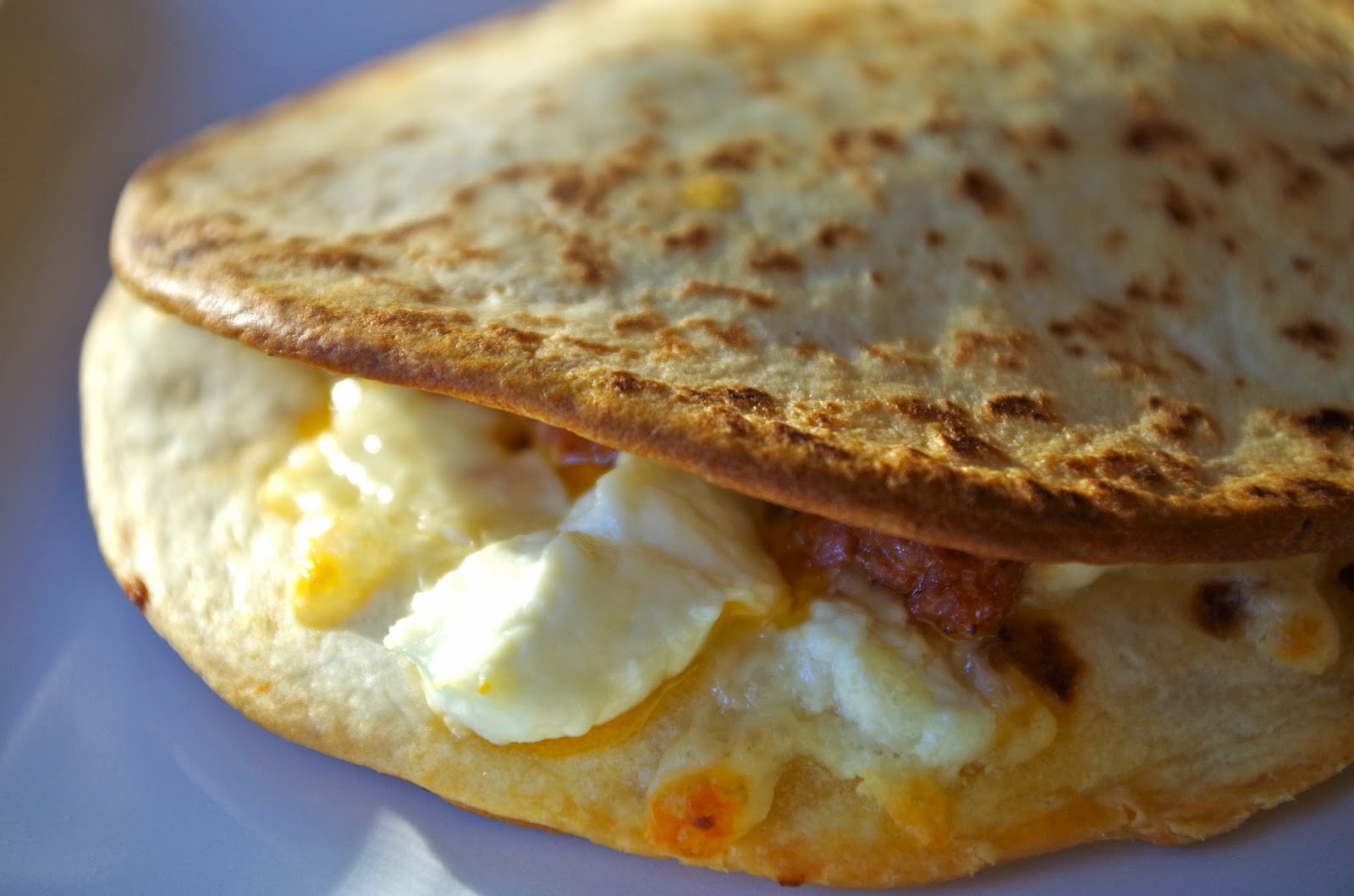 For Game One of the NLCS, the husband and I sat down to an evening of delight with these chorizo and goat cheese quesadillas with a homemade tomatillo salsa (to be clear, for Game Two, we sat down to a plate of disappointment.  There may have been food then, but I don't remember).  On the first of what I hope to be four nights of the Giants winning, the tartness of the tomatillos plays well with the savoriness of the chorizo and the tanginess of the goat cheese.  Chorizo, that little pork sausage originating on the Iberian Peninsula, can come both in the fresh or smoked and cured forms.  I used fresh chorizo, so it was easy to peel off the casing.  However, if you used the smoked form, equally tasty I imagine, you can simply slice it thinly rather than break it out of the casing after you have heated it through.  (In fact, this seems to be the method that Bobby Flay, the originator of this recipe, recommends.) 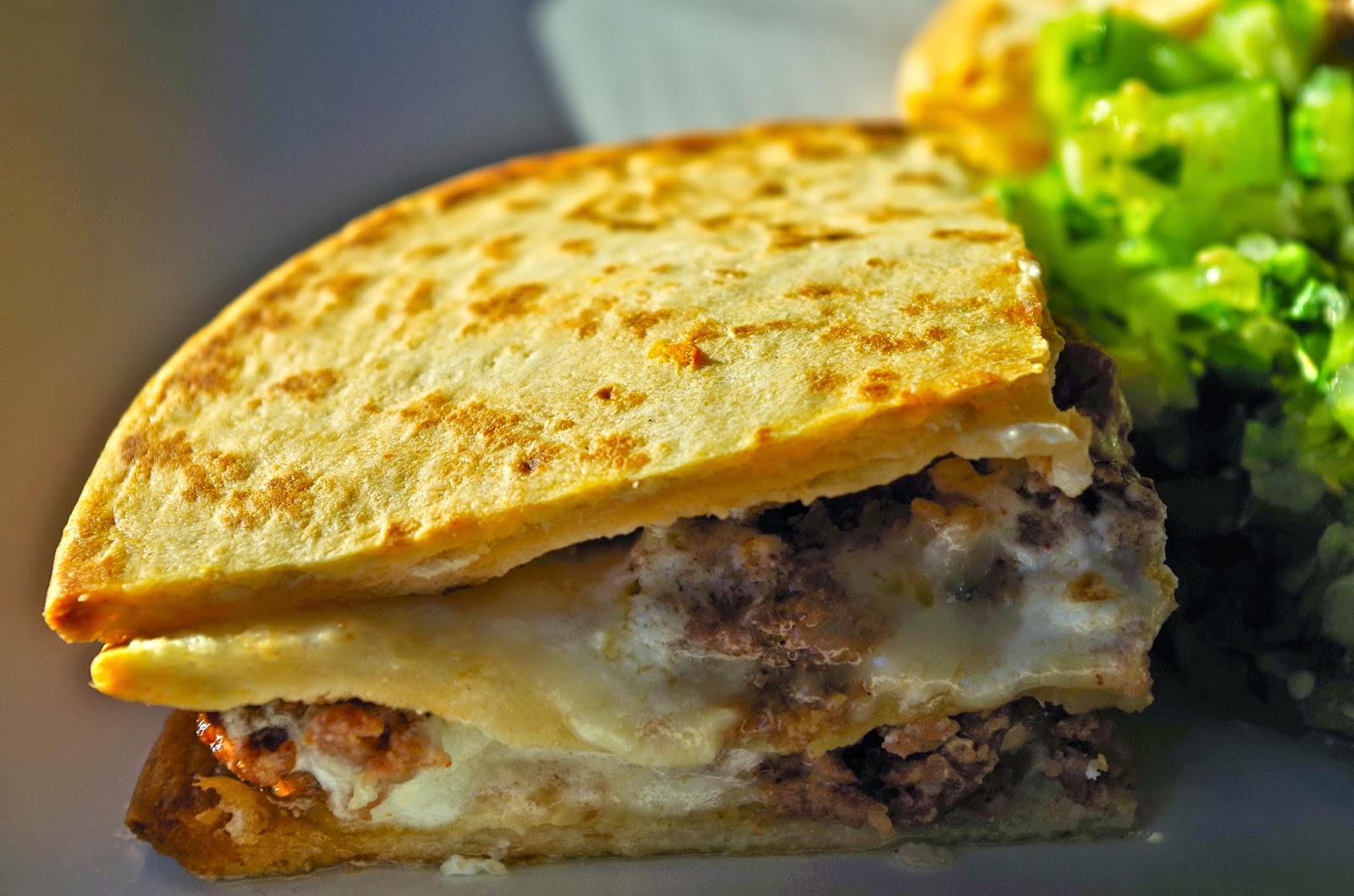 Further, Flay endorses serving these quesadillas with three layers, but we found that a little much on the breadiness.  Thus, I have modified the recipe to just be two layers.  However, if you feel the urge to put another tortilla and cheese in your quesadilla, I won't tell anyone. 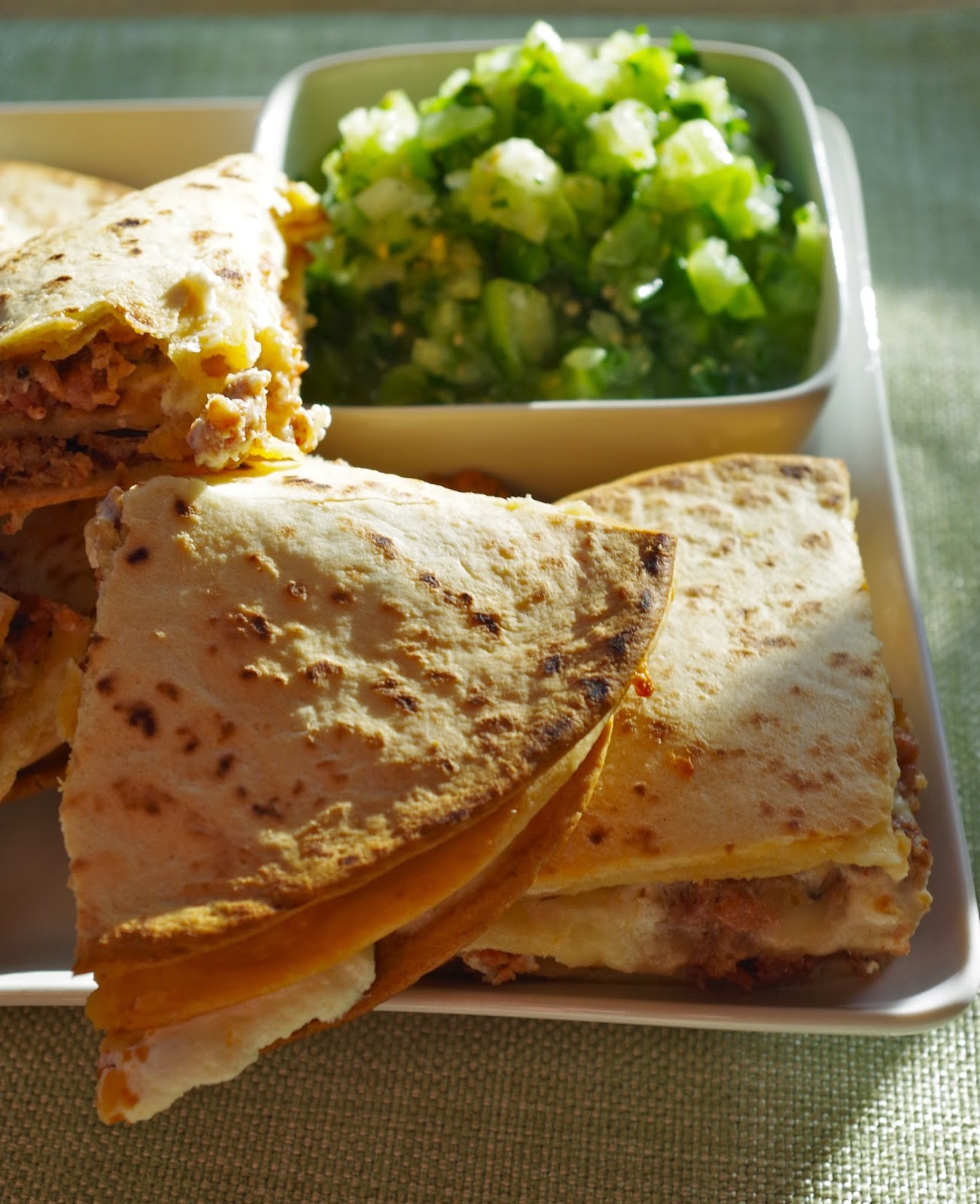 Today marks Game Three at 1 p.m. San Francisco time.  Given that I will be at work, I imagine that my lunch will hardly be as delightful as this one, but let's hope that the results of the game will be the same as they were on Saturday.  My fingernails can't take any more crazy bases loaded wild pitches and walk-off homeruns. 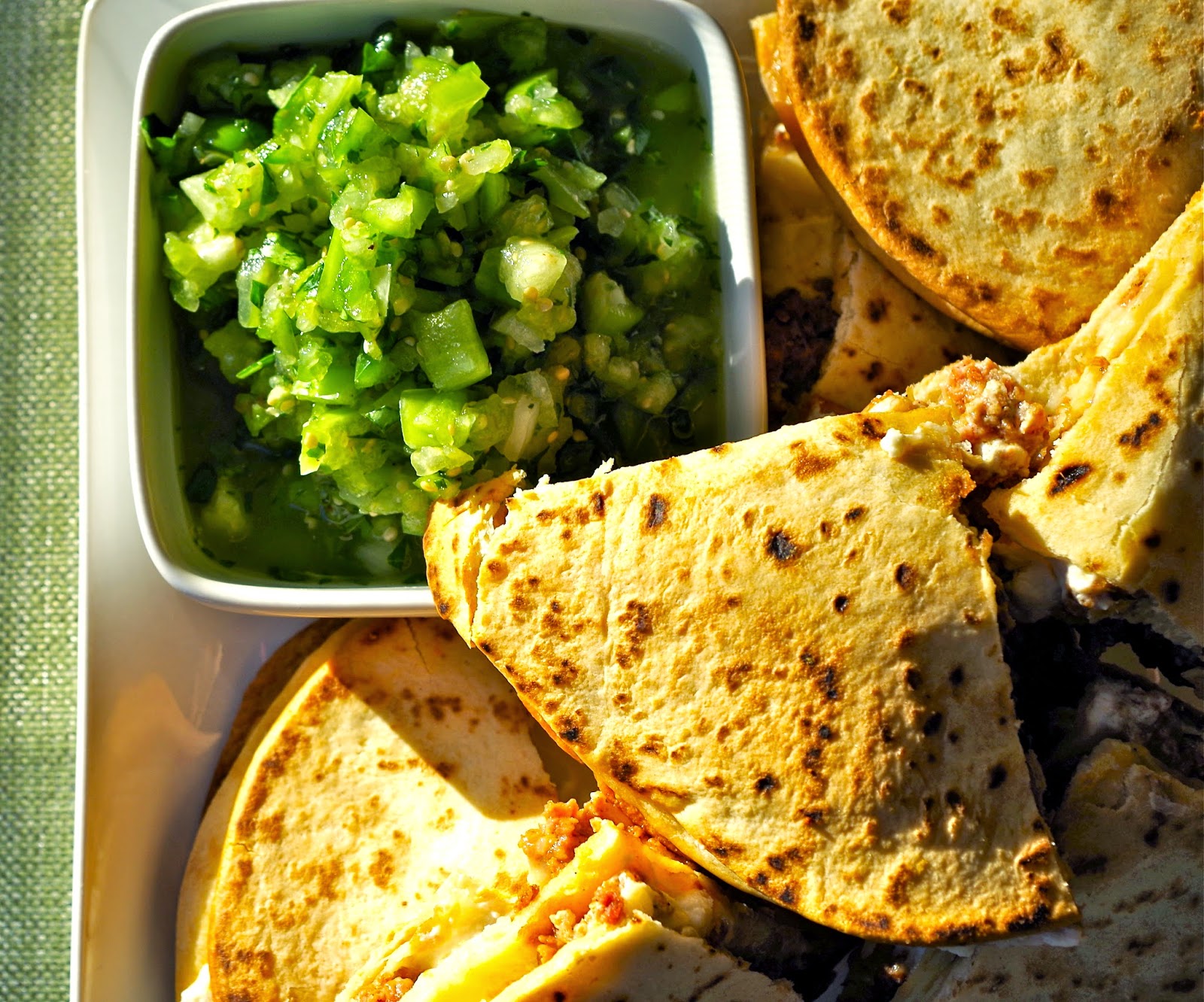 Serves 4 (as an appetizer)

Instructions:
To make the salsa:
1.  Combine the tomatillos to the honey in a bowl,  Season to taste with salt and pepper.  Refrigerate for up to a day.  Bring to room temperature before serving.

To make the quesadillas:
2.  Peel and crumble the chorizo.  In a skillet over medium-high heat, cook the chorizo for 10-12 minutes.

4.  Place 2 tortillas on an ungreased baking sheet.  Spread half of the cheese and chorizo and cheese on each.  Season to taste with salt and pepper.  Cover each with the remaining tortillas.

5.  Bake for 8-12 minutes, or until the tortillas are slightly crisp and the cheese has melted.

6.  Cut into quarters and serve hot, garnished with tomatillo salsa.  Serve extra salsa in a bowl on the side.