A couple of years ago, a friend of mine recommended this book, The Everlasting Meal. It has since become one of my favorite works of food writing*, and I am not alone; in fact, The New Yorker loved it as much as I do and conducted a lovely interview with Tamar Adler once her book was presented in paperback. The book combines poetic meditations with long form recipes (those that become intertwined with the stories she tells) with a sprinkling of some separated "how to" recipes.

*If you're looking for a great gift for the foodie in your life, I recommend this book wholeheartedly.

Recently, in the CSA box we were presented with a giant bunch of turnips, a bundle of chard, and one of arugula. We also had a bag of dried cannellini beans. Using Chez Panisse (where Adler once cooked) and Adler 's book, I turned to the process of making wilted greens and cannellini beans, a simple supper that extended into a week of lunches and eventually into a Friday night simple meal. In true Adler fashion, I made the pot of beans into its own everlasting meal. 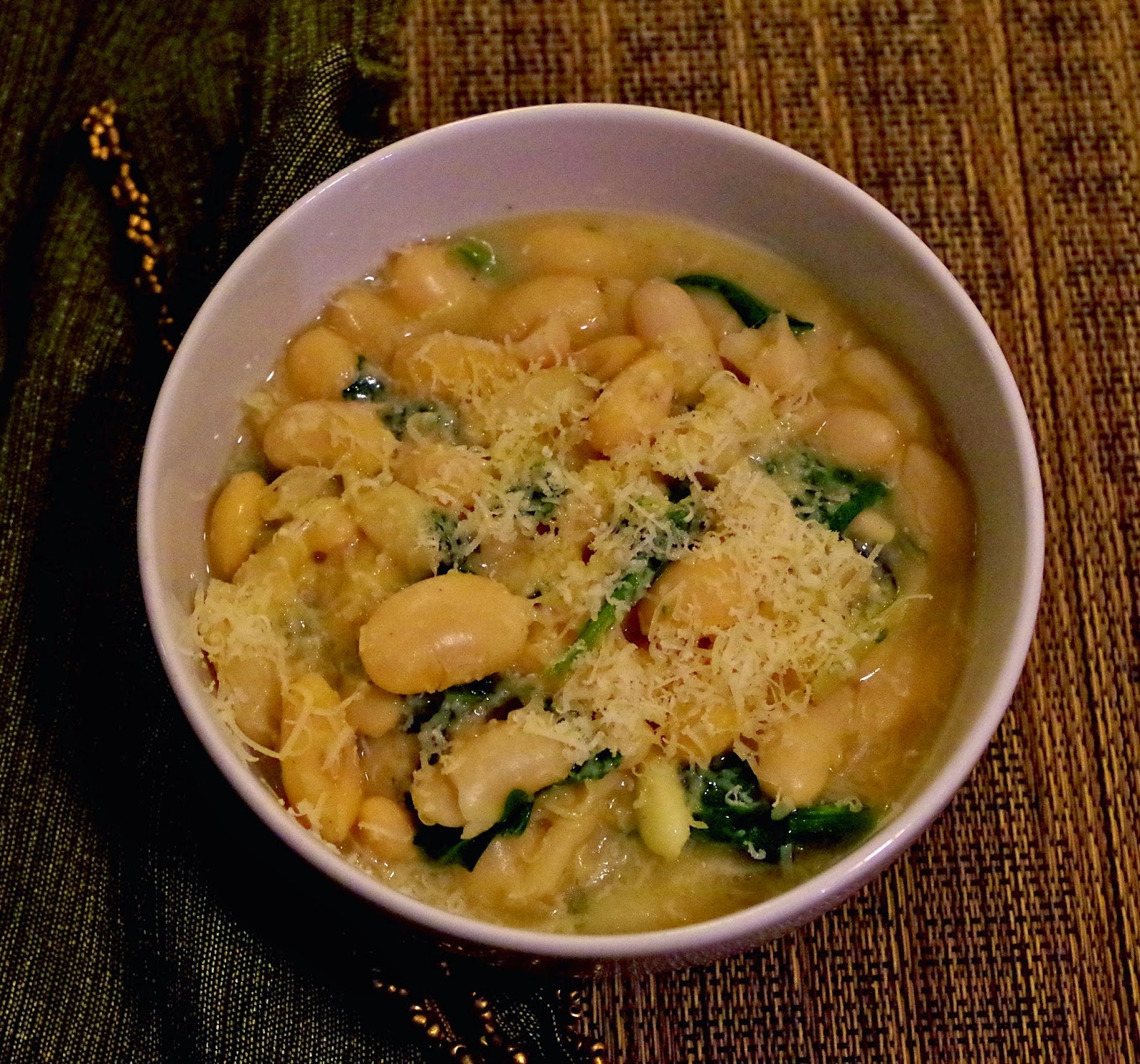 Adler opens this seventh chapter on the humble bean with a Tuscan saying, si stava meglio quando si dtave peggio--we were better off when things were worse--and she keeps her focus on beans as a long-term process often relegated to those who have been worse off. Advising us to divorce tonight's soaking of beans from tomorrow's hunger, she cautions a long view, and she promises that we will, indeed, be better off the more often we embrace the modest legume.

While canned beans are passable in a pinch and dried ones dandy when that's all you have, Adler suggests using fresh beans when you can: "When you know the taste of a fresh bean, you taste in dried ones the invisible mark all true loves bear: a memory of what it was we first fell in love with.  Fall in love with a fresh bean, and you will stay in love with a dried one." All I had were dried ones, so I did as instructed and soaked them overnight. The longer the soak, the faster the cook, but don't let such a dictum belie the true patience you must exhibit while preparing the bean. Instead, put the beans in a bowl, cover them with water, walk away.  Come back in a few hours to determine if you need more water, as the beans will draw the water in until they are engorged and wrinkly. Keep the beans submerged: the more water you give them the better.

When it comes time to boil the beans, fill the pot with the good things you can find in your refrigerator--some herbs (parsley, thyme, rosemary, bay leaves, oregano--these will all do nicely) and aromatic vegetables (onion, carrot, celery, garlic). However, the biggest trick is to toss in the butt ends of cheese (parmesan, reggiano, asiago), for these make the broth creamy and thick. Then set the pot on low and walk away again. Beans can cook for up to four hours (but as low as 30 minutes if you have fresh beans). 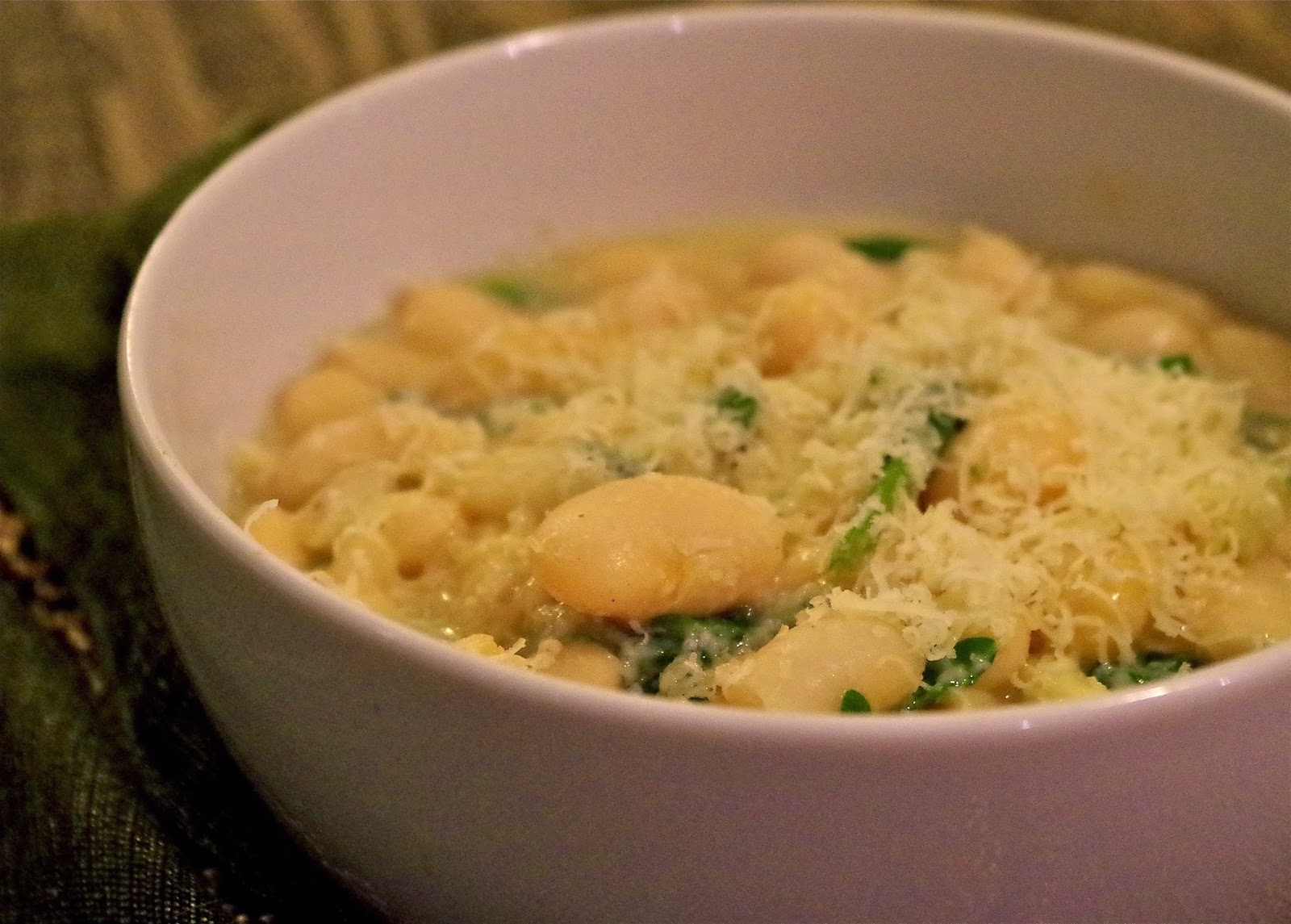 Adler states that the best advice for determining the done-ness of a bean came to her from The Best in American Cooking by Clementine Paddleford. The book instructs to simmer "until beans have gorged themselves with fat and water and swelled like the fat boy in his prime." Adler gives her own, equally descriptive encouragement: "A cooked bean is so tender that the mere flutter of your breath should disturb its skin right off."

When you drain the beans, keep the cooking liquid. No matter what. That broth is divine, and you can add it to soups, pastas, or stews, but it is also lusciously satisfying just on its own.

Once the beans are done, the rest is up to you. Here I used the guidance of Chez Panisse to wilt some greens and mix the beans and greens together for a simple supper that turned into a week's worth of lunches. Generously drizzle with extra virgin olive oil, grated Parmesan, and salt and pepper. At the end of the week, I sauteed up some onions, tomatoes, and garlic to which I added the beans and greens. I then tossed this mixture with a pot of penne, a liberal dousing of pepper, and a sprinkling of olive oil to create the perennial favorite, Pasta with Beans and Greens (here I have another recipe for Pasta e Fagioli, but winging it seemed to work beautifully, too, and making it with dried beans was worlds better; however, canned will do in a pinch).

Finally, a closing quotation from Adler, which is how she ends her own chapter on the bean: "We do know that people have always found ways to eat and live well, whether on boiling water or bread or beans, and that some of our best eating hasn't been our most foreign or expensive or elaborate, but quite plain and quite familiar. And knowing that is probably the best way to cook, and certainly the best way to live."

*I used thyme, parsley, and a bay leaf
**I used chard, arugula, and turnip greens

Instructions:
1.  Soak the beans overnight, being sure to check to see in the beans need additional water a couple of hours into their soaking.

2.  The next day drain them and put them into a heavy-bottomed pot with the bouquet garni. Add the onion (quartered), carrot (halved), celery stalk (halved), and any cheese ends  Cover with water or stock and bring to a boil. Reduce to a simmer, skimming off any grey foam that forms on the surface.  Cook the beans until very tender, usually 2-3 hours, but be willing to cook them four 4 hours. Salt the beans generously once they start to soften. When fully cooked, remove from the heat and remove the onion, carrot, celery and cheese ends from the pot.  Reserve the liquid.

3. While the beans are cooking wash, trim and chop the greens.

4.  When the beans are ready, finely chop the garlic cloves and gently saute them in the olive oil with the rosemary or thyme, about 1 minute. Add the beans and about 1 cup of their cooking liquid.  Simmer for about 5 minutes, until some of the beans have crumbled apart--press a few more with the back of a wooden spoon.

5.  Add the greens to the beans, and stew together, uncovered, until the greens are wilted and tender. Add more of the bean liquid if needed, to keep the vegetables moist and a little soupy. Taste for seasoning and grind in some pepper. Serve with olive oil drizzled on the surface or with grated Parmesan cheese.