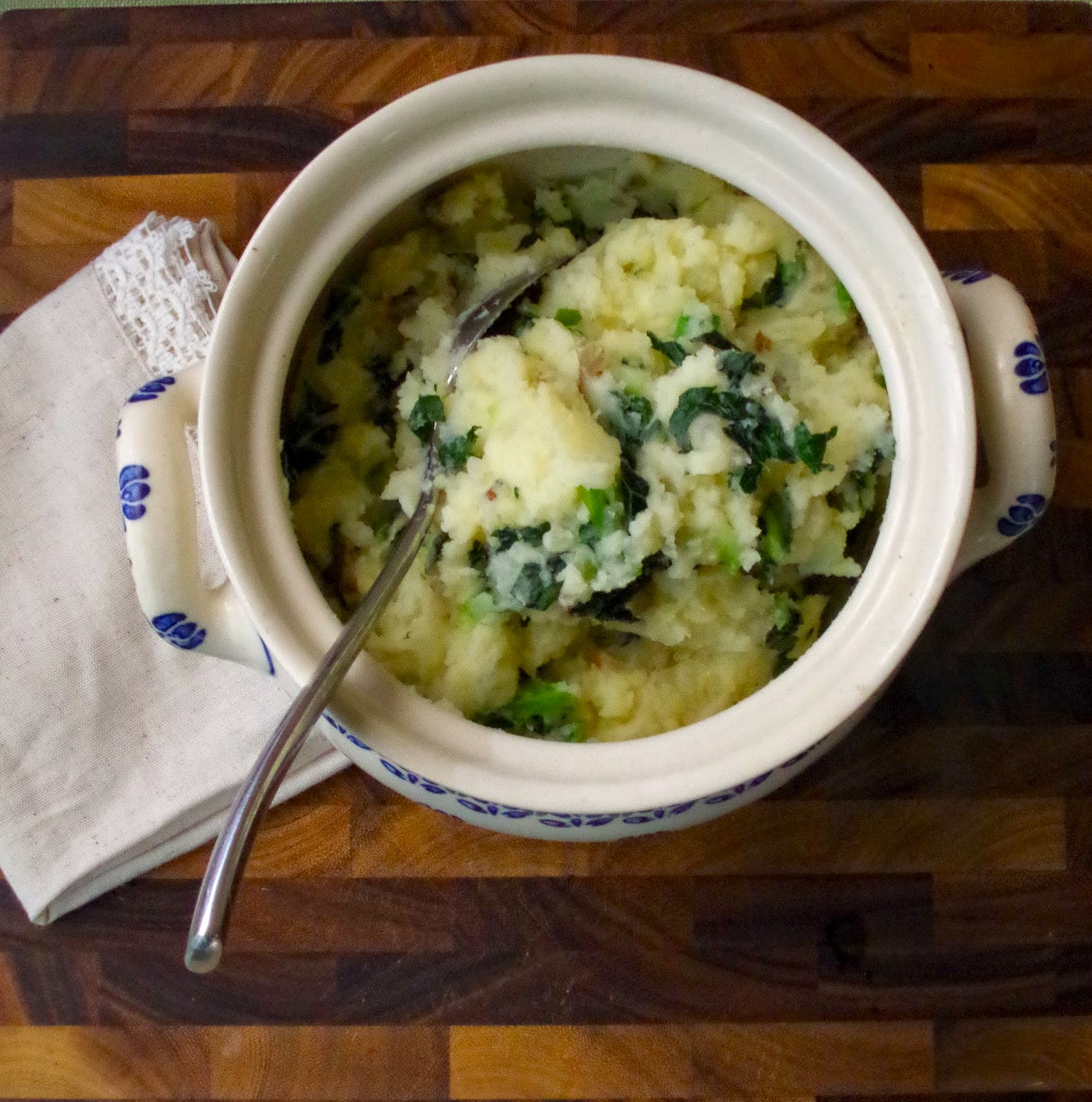 "Colcannon?" you ask.  According to Oxford Companion to Food, the word colcannon is from the Irish cal ceannann which literally means white-headed cabbage.  And it's an old dish: one of the earliest Irish references to the dish as a mash of potatoes and cabbages is found in a diary from 1735; it was later introduced to England, where it became a favorite of the upper classes. People, we're eating history when we're eating colcannon.

And it really couldn't be easier to make: Mash kale and steamed potatoes together with shallots, milk and butter.  Sure, it's simple. We need simple. 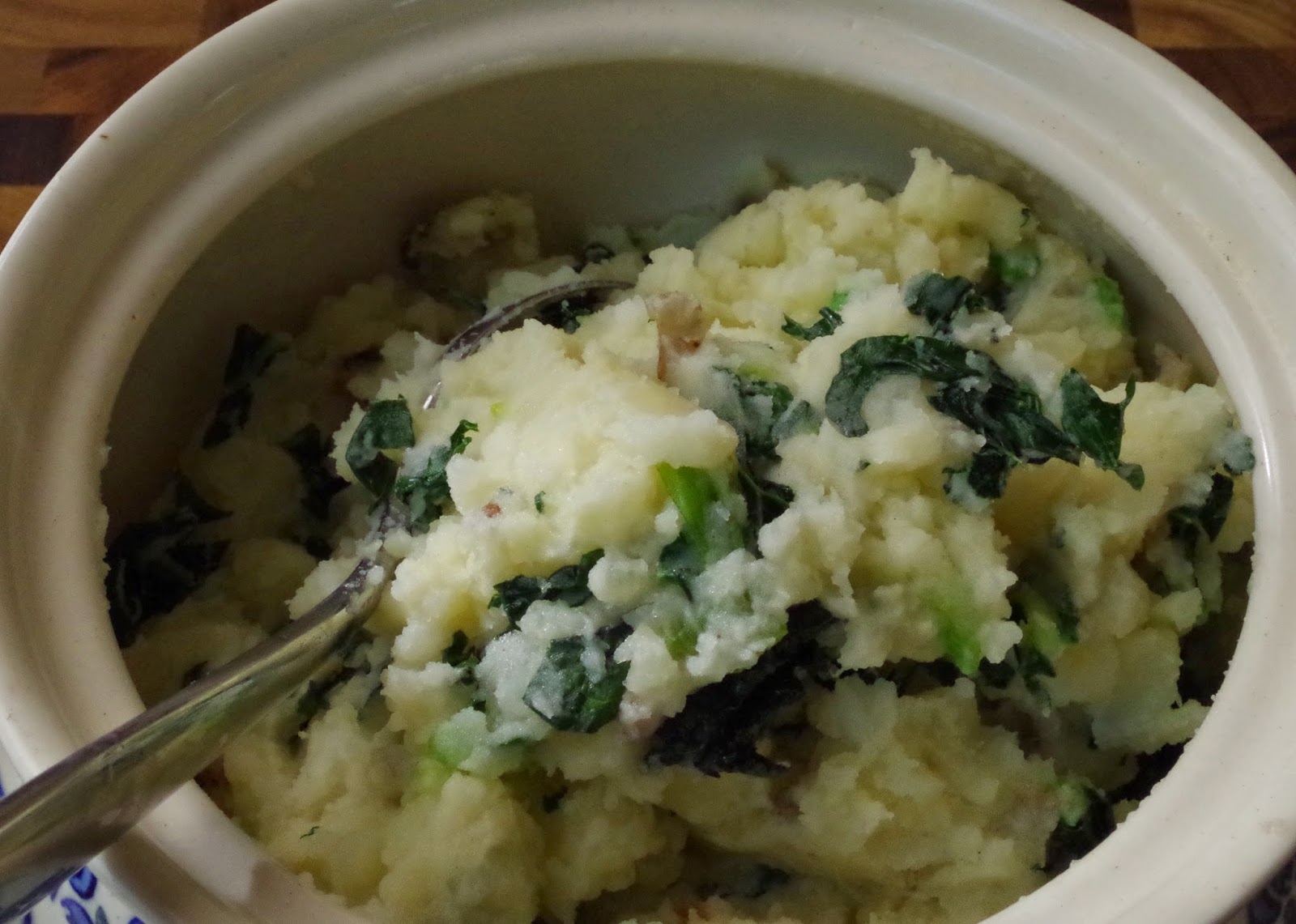 Let's state the obvious. I am making colcannon because one of my favorite holidays celebrating one of my favorite places to visit is upon us. However, I have done it all wrong. I have chosen the wrong holiday: "In Ireland colcannon was associated traditionally with Halloween festivities, when it was used for the purposes of marriage divination. Charms hidden in bowls of colcannon were portents of a marriage proposal should unmarried girls be lucky enough to find them, whilst others filled their socks with spoonfuls of colcannon and hung them from the handle of the front door in the belief that the first man through the door would become their future husband" (again, according to Oxford Companion to Food, gleaned from this fun website on Irish food). 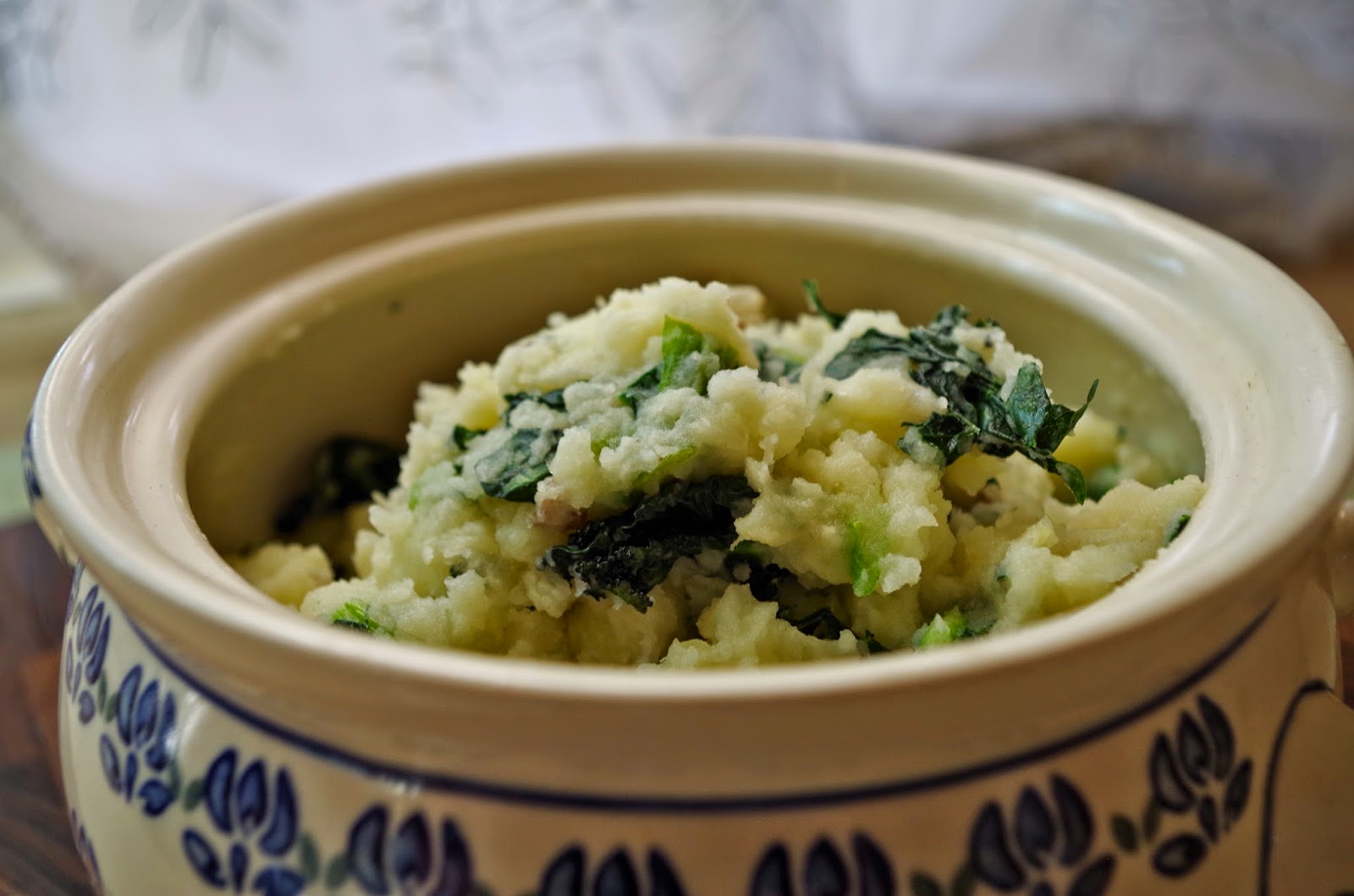 While I was not hiding charms in the potatoes or filling my socks, I was eating these alongside  traditional corned beef. And I did so in the traditional Irish manner (according to the cookbook's instructions): "Push back of a large soup spoon down in the middle of each portion to make a crater, then put a large pat of room temperature butter into each one to make a 'lake.' Diners dip each forkful of colcannon into the butter until its walls are breached."

Once more, unto the breach, dear friends. Once more.  For Harry, England, and Saint George!

(Sorry.  I got carried away. Is it wrong to quote Henry V when eating Irish food? Captain MacMorris (Shakespeare's only Irish character) would say no.) Forks in hands, people. It's time to breach the walls of your colcannon. 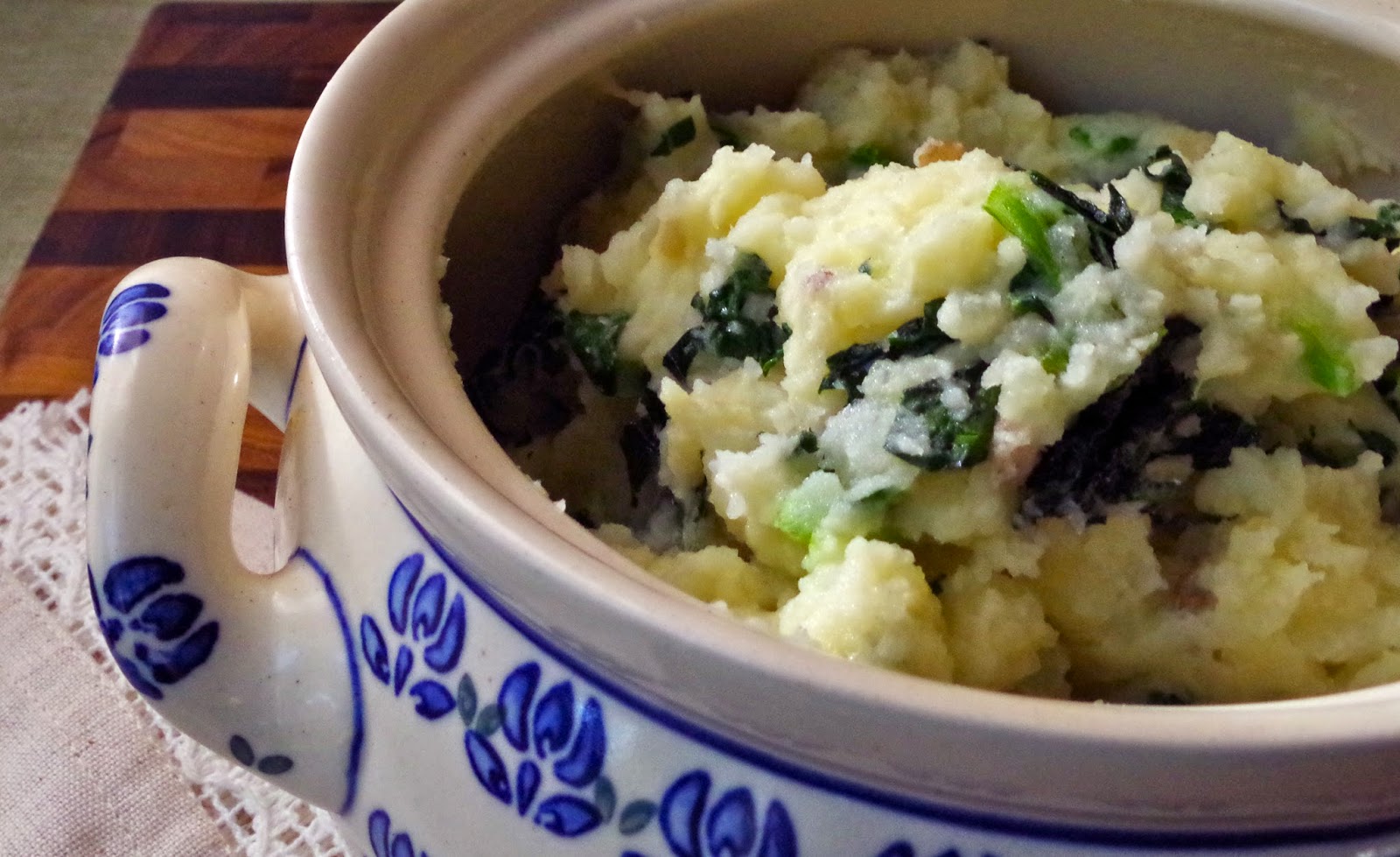 Let's get back on track here and back to the Irish: because I love a good potato poem, I leave you here with section three of the poem "Clearances" by Seamus Heaney (which was voted Ireland's favorite poem of the last 100 years--see, a country that holds a national poll to choose a favorite poem. No wonder Ireland is one of my favorite places to visit):

When all the others were away at Mass
I was all hers as we peeled potatoes.
They broke the silence, let fall one by one
Like solder weeping off the soldering iron:
Cold comforts set between us, things to share
Gleaming in a bucket of clean water.
And again let fall. Little pleasant splashes
From each other’s work would bring us to our senses.


So while the parish priest at her bedside
Went hammer and tongs at the prayers for the dying
And some were responding and some crying
I remembered her head bent towards my head,
Her breath in mine, our fluent dipping knives–
Never closer the whole rest of our lives. 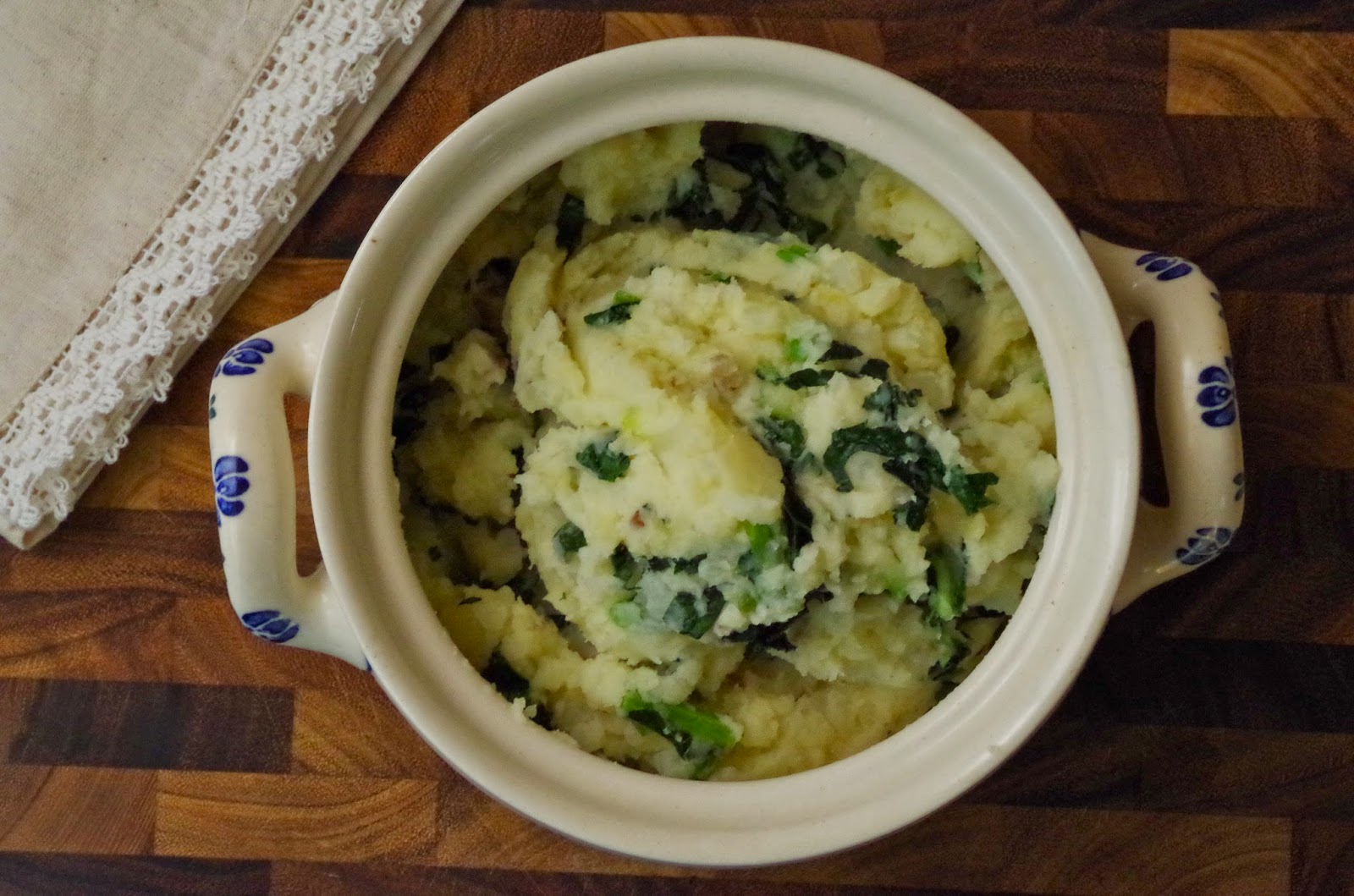 Adapted from  The Country Cooking of Ireland

Instructions:
1.  Put the potatoes into a large pot, with the larger ones on the bottom, and add water to come halfway up the potatoes. Cover the pot and bring to a boil over high heat. When the water begins to boil, carefully drain off about half of it, then return the pot to the heat, cover it again, reduce the heat to low, and let the potatoes steam for about 30-40 minutes. Turn off the heat; cover the potatoes with a clean, damp tea towel; and let sit for 5 minutes more.

2.  Melt 2 tablespoons of the butter in a large skillet over medium high heat. Add the kale and cook until just wilted, about 5 minutes.

3.  Combine the milk, scallions, and remaining butter in a medium pot and bring to a simmer over medium heat. Cook for about 2 minutes, then add the greens and stir in well. Remove the pot from the heat, cover, and set aside.

3.  Drain and carefully peel the potatoes, then return them to the pot. Add the greens and their liquid and mash until smooth, leaving a few small lumps in the potatoes. Season to taste with salt and pepper.

4.  To serve in the traditional Irish manner, push back of a large soup spoon down in the middle of each portion to make a crater, then put a large pat of room temperature butter into each one to make a "lake." Diners dip each forkful of colcannon into the butter until its walls are breached.
Butter Kale Milk potatoes The Country Cooking of Ireland