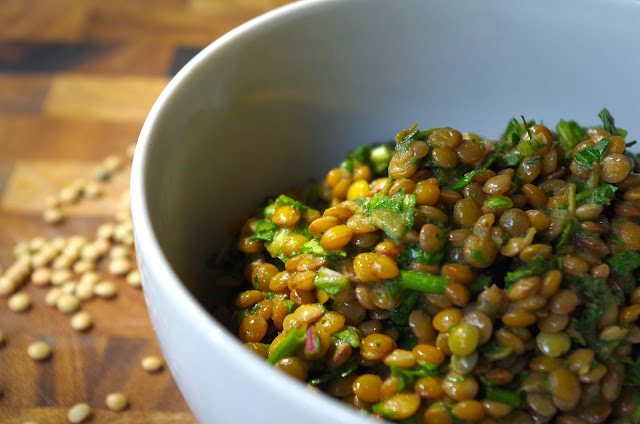 Last weekend, I had the wonderful opportunity to go to Portland to visit three schools and see their English programs. What a pleasure it is to see good teachers thinking about their craft and to see the intersections between programs. Even in May, the act of seeing wonderful people teach can be inspiring and I am brimming with ideas for my own teaching back here in California.

The only problem on this trip was that it was 80 degrees and sunny.

People, you know I could move to the Northwest for the coastal climate, and I did not sign up for Midwest summer weather in May. Apparently, as soon as I returned home to California, the Oregon weather was far more seasonable and regional--overcast and 60s. Oh, Oregon, why do you disappoint me with all your bright sun and cloudless blue skies? 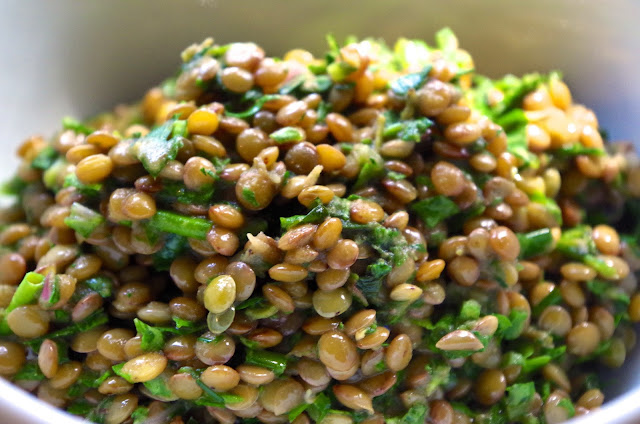 Upon my return, I did some cooking, in part to prepare for the next installment of the CSA box. If anything, the hardest part about the CSA box is upping our daily vegetable intake in order to ensure that we don't leave any to waste from week to week. Thus, I pulled down Mark Bittman's ur-text on how to cook everything and put together this lentil salad. (On a side note, Bittman has a new book, A Bone to Pick, that is now on my "to-read" list.)  Bittman's reliable master recipe for beans became the basis for a much meddled with recipe for a simple lentil salad with (straight from the CSA box) herbs. This is a pretty loose recipe, so substitute what you have on hand.

I really like the concept of lentils, both historically as well as etymologically. Lucky for me, I also love the way they taste. I have already spoken about how the word lentil means from "lens" in Latin, which delights me to no end. But I also love that lentils are one of the world's first cultivated foods, probably from about 8,000-10,000 years ago in what is now Syria and Iraq. Pretty cool stuff in my book. 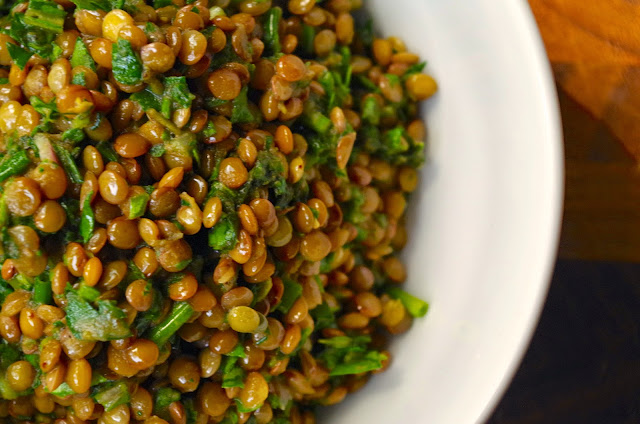 Bittman points out in his book that there are three basic kinds of lentils--Brown, Red, and Green. Let's take a moment to set up a primer on the differences between these three, shall we?

Brown--Your basic lentil, the one you see the most often at the grocery store. They holds their shape relatively well, so these lentils are great in salads but also in soups, and their flavor is kind of a mild, earthy one. These lentils cook up in about 20-30 minutes.

Red--Their colors range from orange to gold with even some deeply-hued red ones, and they are most often split. The quick quickly (about 30 minutes) and they often fall apart or become mushy; thus, they are great in dal, curries, and stews where structure doesn't matter quite as much. These lentils are mild and a bit sweet.

Green--These are the most flavorful lentils, with a rich, peppery flavor. Like brown lentils, they hold their shape well, and thus are great in salads, too.  These take the longest to cook (about 45 minutes) 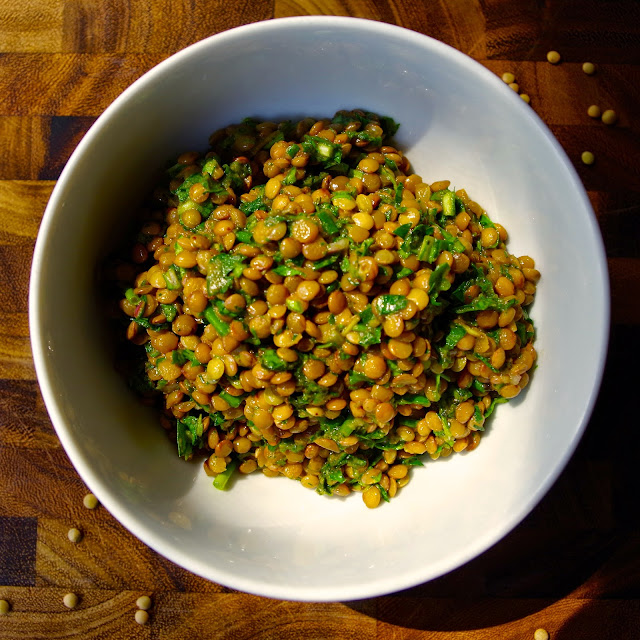 I used brown lentils for this little salad, and green lentils would have been just as tasty. What I appreciate about Mark Bittman's recipe is that it is flexible and forgiving, and it is just the perfect vehicle for some of the fresh dill and arugula from the CSA box.

Now if only I can take this salad with me to a rainy, overcast Portland--well, then, all would be right in my world.

Adapted from  Mark Bittman's How to Cook Everything

Instructions:
1.  Put the lentils, bay leaf, parsley sprigs, and onion wedge in a large, deep saucepan with water to cover. Cook over medium heat, stirring occasionally.  After 30 minutes, if lentils are tender and liquid is absorbed, the dish is ready. If lentils are not tender, add enough liquid to keep bottom of pot moist, cover and cook for a few more minutes. If lentils are soft and there is much liquid remaining (which is unlikely), raise heat a bit and cook, uncovered, stirring once or twice, until it evaporates. Discard bay leaves, parsley stems and onion wedges.

2.  Stir the vinegar and shallot together in a large bowl.  Sprinkle with salt and pepper. Stir in the olive oil.

3.  Add the lentils to the bowl while they are still hot (they soak up the vinaigrette more if they're hot). Toss gently until the lentils are coated with dressing, adding more olive oil if you like.

4.  Let cool to room temperature (or refrigerate), stirring once or twice to distribute the dressing.

5.  Stir in the parsley, arugula, chives, dill, and thyme just before serving, then taste and adjust the seasoning.
Arugula Chives Dill How to Cook Everything Lentils Onions Shallots