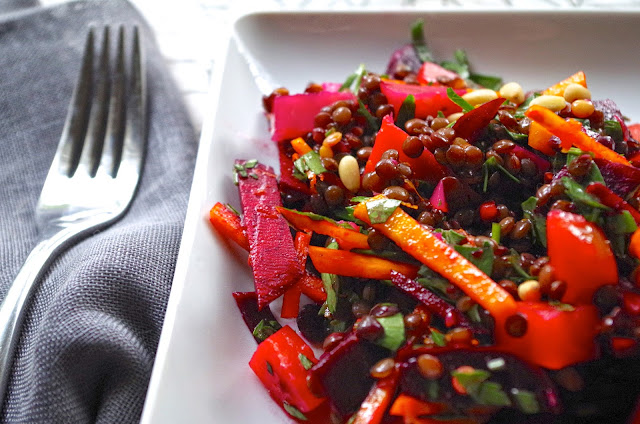 It’s baseball season. The time for hotdogs and beer. Nachos. Maybe even hot chocolate (hey, it’s San Francisco: more often than not, a night game when the fog rolls in requires hot chocolate, a hat and gloves, maybe even a blanket). I do not eschew such pleasures, especially in the summer. But to balance such indulgences, the regular days of my life need food that’s a little lighter, a bit more aware of its composition and construction, a fraction healthier. This is where Sarah Britton’s new cookbook, My New Roots steps in. 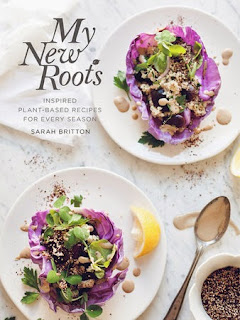 I’ll admit, this cookbook is not for everyone, what, with its “cheese” made from cashews, “bacon” made from coconut, “scallops” made from leeks, and “tuna” made from sunflower seeds. I avoid substitutions on principle (if I want tuna, I eat tuna; I don’t substitute it with sunflower seeds.  That said, I’ll admit, I plan to just put actual tuna atop her recipe for pan bagnat with dill, spring onions, capers, cucumber and sprouts because, lordy, that sandwich just looks so good in the book).

But don’t let the Britton’s substitution recipes stop you from snagging this pretty little book, for she also includes recipes for roasted red pepper walnut dip, oyster mushroom bisque, apricot rhubarb clafoutis, cornmeal pancakes with gingered plum compote, fig and buckwheat breakfast tart (which has the prettiest picture in the whole book), and ginger-rosemary roasted grapefruit. I highly suspect that this book will prove handy as we try to eat through our weekly CSA box.

Which is precisely what we did when presented with two bunches of beets recently. 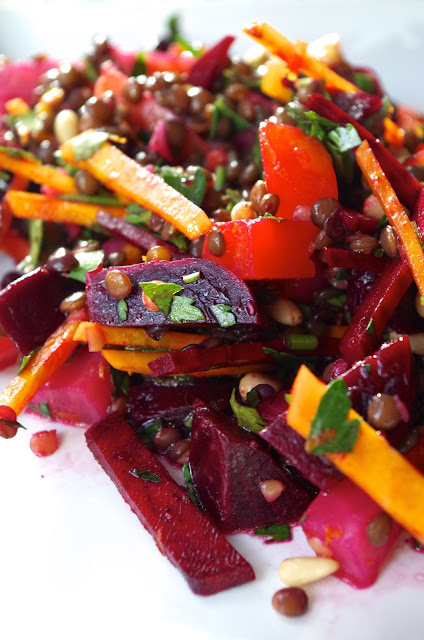 Earthy and acidic, this beet salad, which Britton entitled “Beet Party with Orange and Pine Nuts,” is quite delightful, for it has the elements of a satisfying dish (especially with a crumble of goat cheese across the top) and the fundamentals of sensible eating (no unidentifiable ingredients, which cannot be said of my ballgame hotdogs).

Britton also argues it has the rudiments of a palate-pleasing party with all of its textures and flavors, and I would have to agree. She adds raw beets to this salad, which added a pleasing crunch next to the chewy lentils and the velvety roasted beets.

Britton soaks the lentils overnight, which I generally don’t do; however, said pre-soaking shaved oodles of time off of this recipe, especially since I roasted the beets the night before as well. All that was left to do come dinnertime was to cook the lentils and to make the dressing. This recipe lasted a while, too, for what was last night’s dinner became today’s lunch.


It’s one of those recipes from a book that that proves a necessity for the committed health-food eater and guarantees to be a fine addition to the cookbook shelf for those of us who like an occasional hotdog but then need to rebalance the basics. 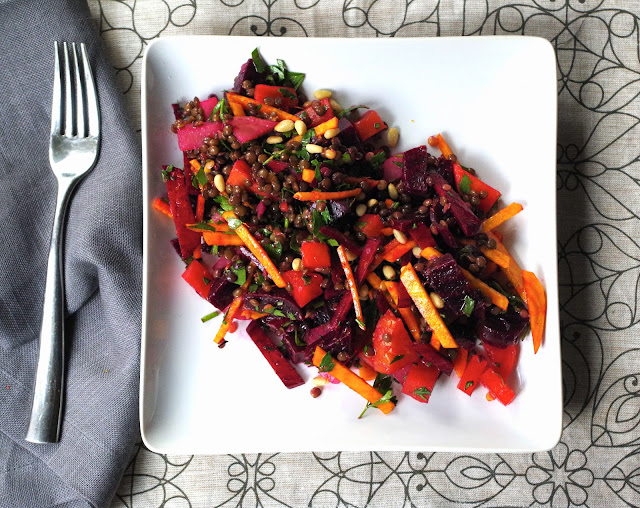 2. Wrap 4 beets in aluminum foil and put them on a baking sheet. Roast the beets until they are cooked, about 35-50 minutes depending on the size of the beets. Remove from the oven, let them sit in their foil for about 15 minutes, and when cool enough to handle, unwrap the foil and slide the skins off the beets. Chop the beets into bite-size pieces, and add them to a large bowl.

3. Drain and rinse the lentils, put them in a saucepan, and cover with water. Bring to a boil, reduce the heat, and simmer until tender but not mushy, about 10-20 minutes. Drain and rinse under cold water to stop the cooking. Add them to the cooked beets.

4. With a vegetable peeler, peel the remaining 2 beets. Using a mandolin or a sharp knife, slice the beets into thin rounds. Then slice the rounds crosswise to make matchsticks. Add the raw beets to the lentils and roasted beets.

5. Whisk the olive oil, vinegar, orange juice, honey, and a pinch of salt together in a small bowl, and pour this over the salad. Add the orange zest, chopped parsley, pine nuts, and season with salt and pepper. If using the cheese, sprinkle it on at the very end, and do not mix (for the beets will stain the cheese pink).