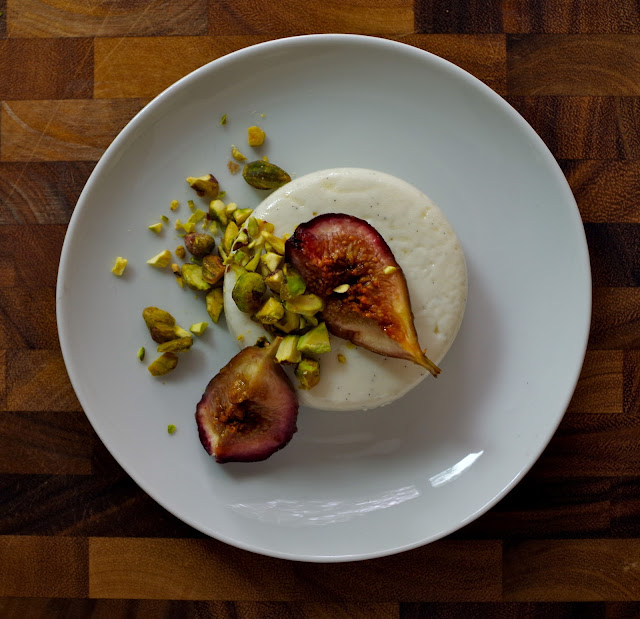 Last night, the husband, his mom, one of his dads, and I sat in the backyard talking of television shows and books and cell phone plans (hey, not all of it was inspiring), sipping a rosé, and munching on an over-abundant crudité platter. (I have issues--most of which involve my great fear that there will not be enough food for our guests. Not once have we ever run out of food, so I know that this is an unfounded fear.) This morning, the husband shuttled his mother to the airport so she could fly back to New York, pack her belongings, and move next week to Florida.

However, last night was about settling in and diving deeper into our conversations (and beyond the benefits of Sprint vs. AT&T vs. T-Mobile). As darkness fell and it got much cooler outside, we moved indoors to the couch and the floor, where I listened as the husband and his family reminisced over the batty woman who owned the food co-op distribution space, a cross-state move with a truck that could go only 15 miles an hour, and various injuries sustained from too-hot air ducts, sharp branches, big wheel wrecks, and spectacular second-base catches. It was a sweet and fine way to end her visit as the evening crept well into the night. 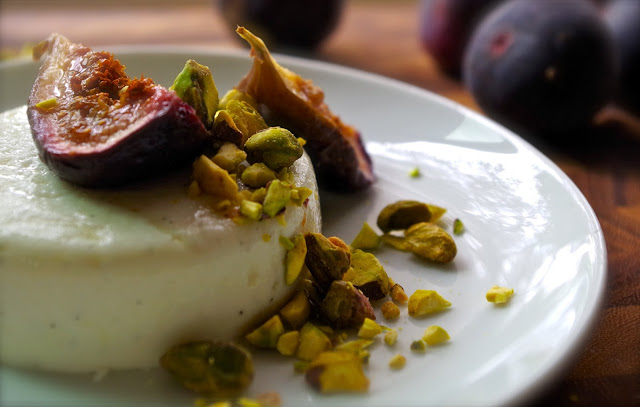 At the close of a spectacular meal (the husband can grill!) of tri-tip and smoked salmon and grilled corn on the cob, I served up this panna cotta, which I affectionately dubbed milk jell-o. The recipe comes from the inimitable Sprouted Kitchen, and it is one to save for the ending of a lovely meal among good people.

It is a taste explosion: the tanginess of the goat cheese next to the creaminess of the yogurt. And oh, the sweetness of the honey next to the mildness of the fig. And let's not forget the sweet, warm, floral notes of vanilla. The dessert is, indeed, one to savor; however, we did not, as we found we had all gobbled up this Italian cooked cream in no time flat and were left to stare at our little plates and surreptitiously slake a finger across their surfaces in hopes of finding remnants to lick from our fingertips.

Okay, maybe that was only me. 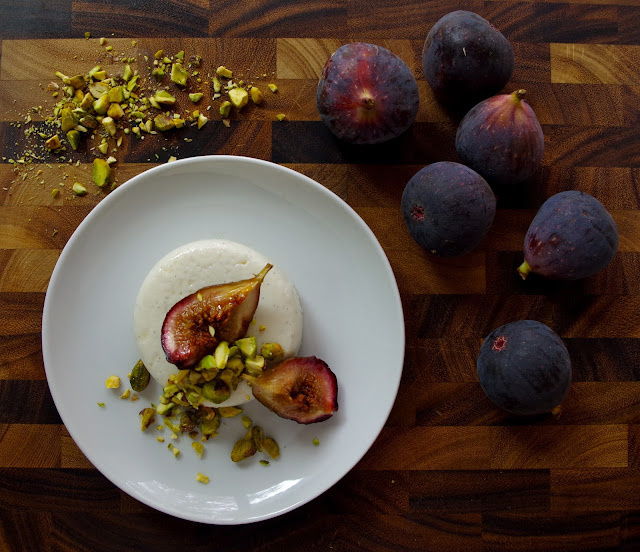 A few notes if you choose to make this wonderful dish: I did have to make this twice. In my first attempt, I began to warm the milk on the stove. When I added the raw honey, the milk immediately curdled.

The next morning, the husband went out to buy another pot of honey (this time pasteurized). We're not sure if it was the raw honey or something else that caused the curdling (we can find no internet evidence of others suffering the curdling conundrum), but I went with the honey as the culprit, and my second attempt turned out just fine. (Let me know if you run into any similar curdling issues and your hypotheses as to why!) 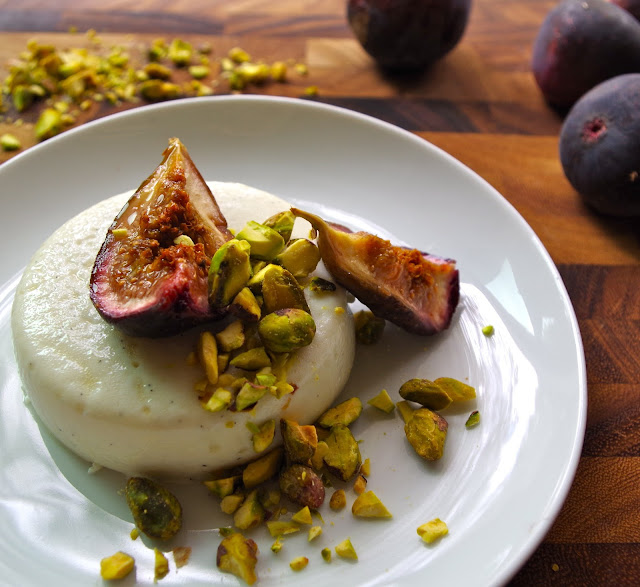 Further, I made some modifications to the recipe. In an attempt the soften the milk fat blow, I used 2% Greek yogurt instead of whole as Sara Forte suggests, and the end result was still quite creamy and satisfying. (I did keep the whole milk, however.) I substituted a whole vanilla bean for the 1/2 teaspoon of vanilla extract; thus, my panna cotta was considerably more vanilla-infused. For the final product (but not the photographs), I added some grilled peaches, as the mother-in-law requested them and, oooh boy, the peaches are divine this year. 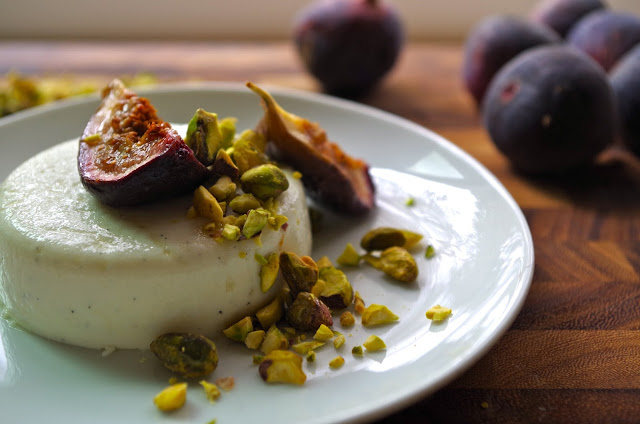 As I write this, the mother-in-law's plane should be landing soon. She faces oodles of boxes to pack as she awaits my other mother-in-law's return from a workshop on tiny house building so that they can pack the moving truck and head off to Florida. However, I hope that our dinner and dessert last night were a sweet way to bolster her as she takes off on her next adventure.

I know that it was a sweet way for the husband and I to end our visit with her, indeed. 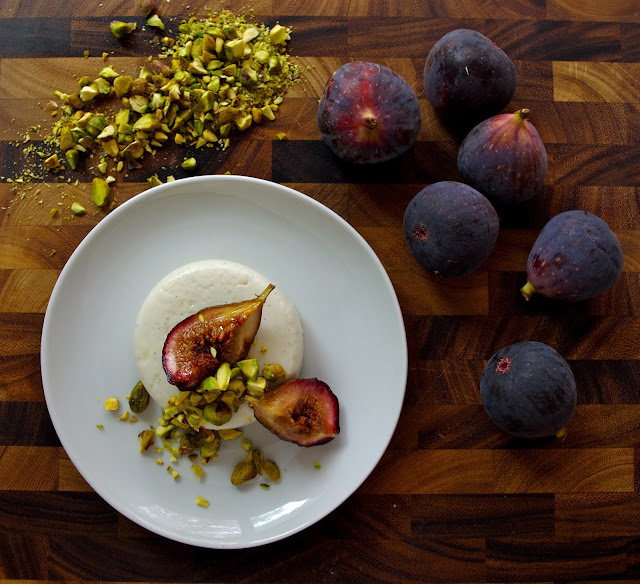 Adapted from The Sprouted Kitchen: A Tastier Take on Whole Foods

Instructions:
1.  In a small bowl, sprinkle the gelatin over the water and let it sit. Coat six 6-8-ounce ramekins with a neutral oil.

2.  In a small saucepan over medium-low heat, warm the milk and honey until bubbles start to form and the honey has dissolved. Turn off the heat. Stir in the goat cheese and the dissolved gelatin until smooth. Add the yogurt and vanilla. Pour through a fine-mesh strainer into a bowl.

3.  Divide the mixture among the ramekins. Cover and chill in the refrigerator at least 3 hours and up to overnight.

3.  Preheat the oven to 400 degrees and line a baking sheet with parchment paper or spray with a neutral-flavored oil.  Halve the figs lengthwise and arrange on the prepared baking sheet, cut side up. Sprinkle them with the sugar, and roast until they soften, about 10-12 minutes. Remove from the oven and let cool.

4.  To serve, run a butter knife along the interior edge of the ramekin, and then invert the panna cotta onto a plate. (You could also serve the panna cottas in the ramekins.) Top each serving with the figs and pistachios.