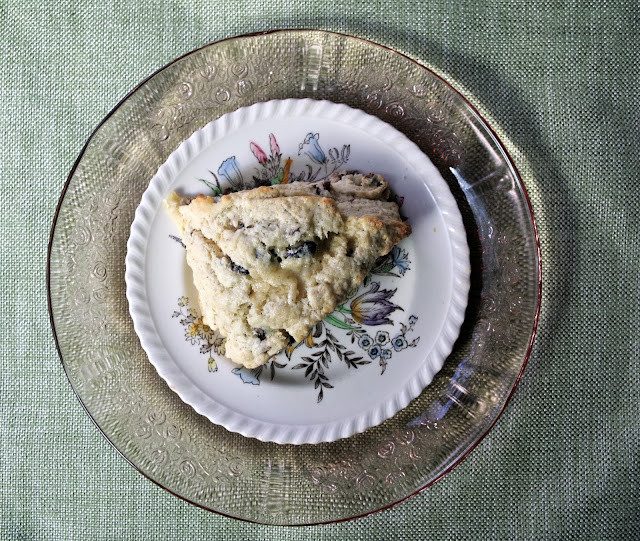 I have always had a sweet tooth. I don't remember a time when I didn't want cake before dinner. But we now know that sugar could well be killing us. What's an avowed sweets craver to do? 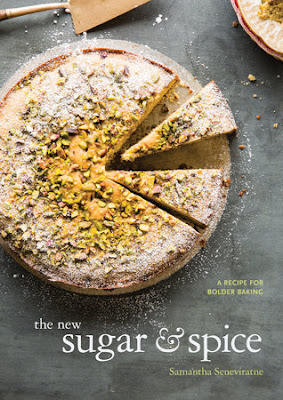 The New Sugar and Spice, her first cookbook, is no low-sugar desserts invective. Instead, it's a cookbook that outright celebrates dessert in all its sugary glory. However, she balances all that sweet with an affection for cinnamon, black pepper, ginger, cloves, and herbs. She argues that we should have our cake, no doubt eat it too, but also ensure that we're not overwhelmed with sugar blandness. Desserts should be returned to a nuanced complexity wherein sugar plays a superb supporting role.

Her blog Love, Cake is a joy, for her photographs are high contrast, high beauty and her writing is delightful. Such expectations carry over into this cookbook, including her introduction where she marries memories of her deceased brother to an overview of the screeds against sugar. She then goes on to talk about her childhood spent in Connecticut with family forays to Sri Lanka and then invites you to mess around with her recipes until you find the right balance of sugar and spice for your own palate. All within two pages. 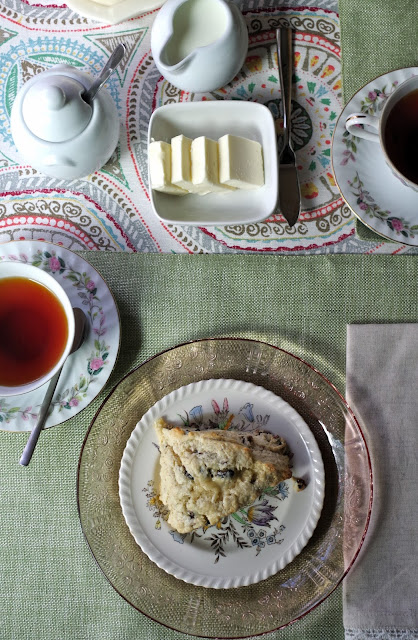 The cookbook is divided into chapters which highlight a particular spice, and already she has me clamoring for Crêpe Cake with Pistachio Cream, Pear Tarte Tatin with Anise Seed Caramel, Cream Tea Brûlée, Orange-Clove Pull-Apart Bread, and Blackberry-Lavender Clafoutis. I see a sweet future in front of me.

I decided to make my first leap into this cookbook with something more modest than her rustic Pear and Chocolate Pan Charlotte or her ambitious Apple Danish with Caraway Cream. I decided to go with the humble scone. 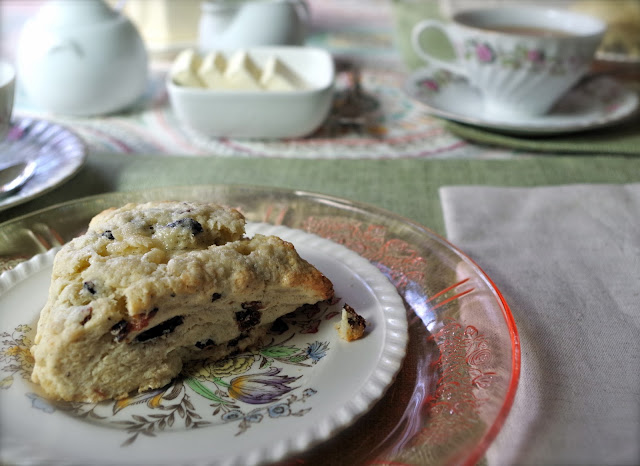 However, Seneviratne hardly makes scones ordinary. Instead, she nudges them to take center stage with the bite of the pepper and the sweetness of the fig. And she takes a balanced approach to these lightly sweetened pastries more akin to a biscuit than to a cake. They are drier and coarser than the biscuit, however, and which happily invites plenty of dunking. (Which I recommend with a cup of tea or, if you must, coffee.) And the pepper adds a bit of a surprise to what is often expected to be a sweet treat.

Originally a Scottish quick bread made with oats and griddle-fried, scones now run the gamut of sweet to savory and are usually made with flour, shaped into individual rounds or cut into wedges, and baked in the oven. Of course, the British tradition is to have your scone precisely at 4 p.m. during tea time and served with a little clotted cream and jam. Seneviratne's take on the scone is fit for any Sunday breakfast or afternoon tea, and she encourages you to freeze the unbaked scones for future decadence at a quarter of the prep time.  I am a fan of eating your scone whenever you please. 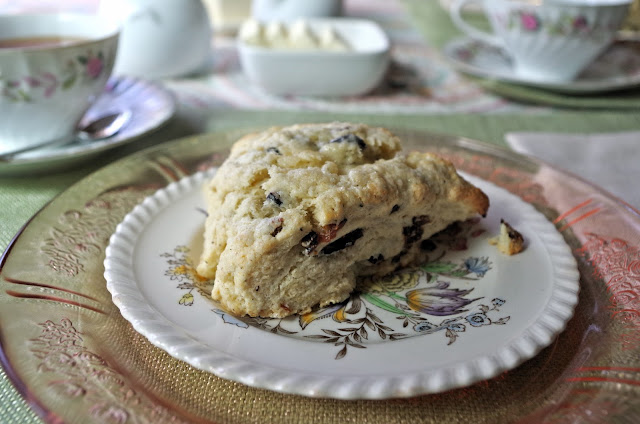 And let's not forget my pretty new plates.  I have mentioned before my love of a new home store in Fort Bragg, Astoria.  The depression-era glass combined with fussy plates almost equals my love of sugar. It was an obvious pairing.

Of course,  you might find yourself embroiled in a simple tea party battle should you try to determine the proper pronunciation of the word scone.  Does it rhyme with cone as most in the United States, Southern England, or Ireland would argue? Or does it rhyme with con as the Scottish and Northern English might insist?  I'll let you fight that battle out on your own (and mildly chuckle as I remember watching such a battle ensue between colleagues).

I'll be over here.  Happily eating my scone for breakfast. And then again for tea time. And maybe again later for dessert. Come on: I have to feed that sweet tooth. 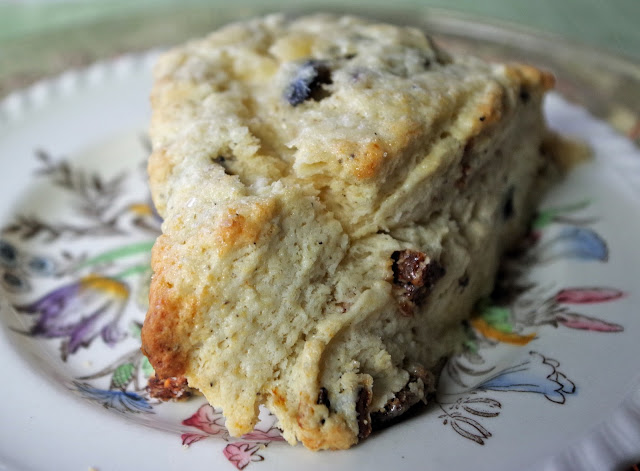 Adapted from Samantha Seneviratne’s The New Sugar and Spice

Instructions:
1.  In a small bowl, stir together the cream, buttermilk, egg, egg yolk and vanilla. In a large bowl, whisk together the flour, sugar, baking powder, pepper, and salt. Using a pastry cutter, cut the butter into the flour mixture until it is the texture of coarse corn meal with some larger pea-size pieces. Add the figs and toss with your hands to combine.

3.  Add the cream mixture to the flour mixture and mix with a fork just until a loose dough forms. Put the mixture out onto a lightly floured surface and knead it, 2-3 times, to get the mixture to come together. Try not to overwork the dough or the scones will be tough. Form the dough into a 6-inch circle. Using a sharp knife, cut the dough into 8 equal triangles. Spread the triangles out evenly on the prepared sheet. Freeze for 20-30 minutes. Preheat the oven to 400 degrees.

4.  Brush the tops of the frozen scones with cream and sprinkle with sugar. Bake the cones until golden brown and a toothpick inserted into the center comes out clean, 15-18 minutes.

You can also freeze the unbaked scones in an airtight container and then pull them out for a quick breakfast or afternoon snack. Just pop the frozen scones in a 400 degree oven and cook for 20-25 minutes.

As promised here are these sweet little scones from  Miette .  I have written about my delight in Miette ( see here ), and so it was a no-brainer when I needed to whip up a vehicle for Strawberry Vanilla Jam. And these did not disappoint. Shall we explore the history of the scone, you and I? There's a lot of information out there about the scone. As in a lot, so let's see if I can round some of it up. The scone was originally a Scottish quick bread made with oats and then griddle-fried. The scone distinguishes itself as not utilizing yeast, as one might expect from other tea pastries, such as a tea cakes or sweet buns. Instead, this well-leavened pastry uses baking powder to achieve its heights. However, baking powder is a relatively recent invention, so scones probably soared using buttermilk as a boost. Now don't get all confused about "high" and "low" or "afternoon" tea. Americans (and their representative tea rooms) lik
Read more