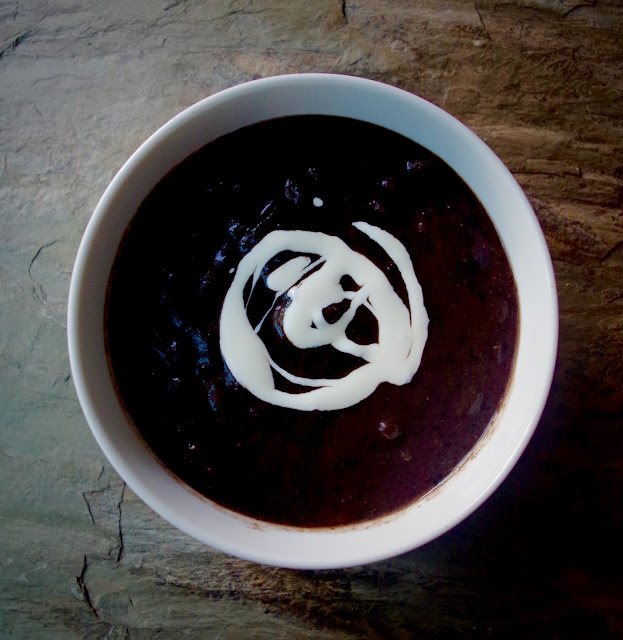 Black bean soup doesn't get the accolades it deserves. This unassuming little soup does what it needs to do--warm the bones on a fall afternoon--and then you go about your business. Little fanfare. Lots of flavor. 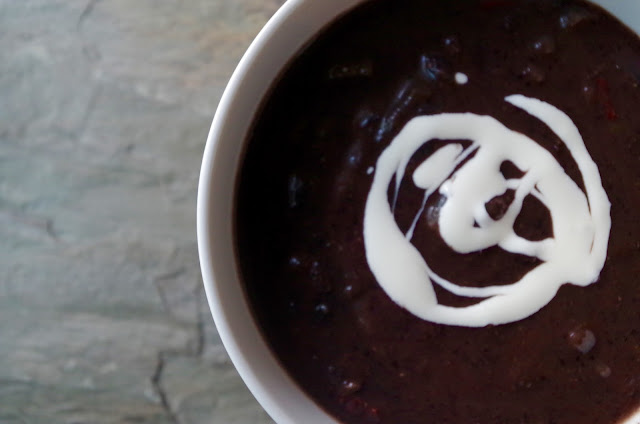 Black bean soup can take as long as you would like: with dried black beans, this is a two-day affair. However, with canned black beans, you can have a quick cook. Further, black bean soup is naturally vegan (although, I wouldn't blame you if you threw some bacon in with the sofrito; truly I wouldn't!). Finally, you can spice it up any way you like it (did someone say fire-roasted tomatoes, ancho chile powder).

Yet, for this particular recipe, I went with simple, traditional, and Cuban. No chiles beyond the requisite jalapeno. No fire-roasted tomatoes. Just beans, sofrito, stock, oregano, and lime crema. 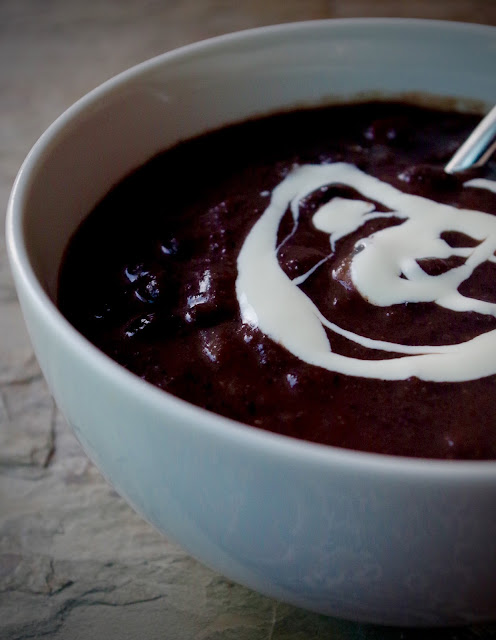 Recently, I received ¡Cuba!: Recipes and Stories from the Cuban Kitchen in the mail, and what a gorgeous little cookbook. Packed with inspirational photography, this book is the outcome of three people's love affair with Cuba. Photographer Dan Goldberg and Art Director Andrea Kuhn teamed up with Food Writer Jody Eddy to bring the flavors of the Cuban into your own.  With a caveat. Not all of these come from the Cuban kitchen. Our cookbook acknowledges that some of these recipes--such as the (ever famous) Cubano--are Cuban American creations and others--such as "Guarapo (Sort of...)"--are "takes" on Cuban food. 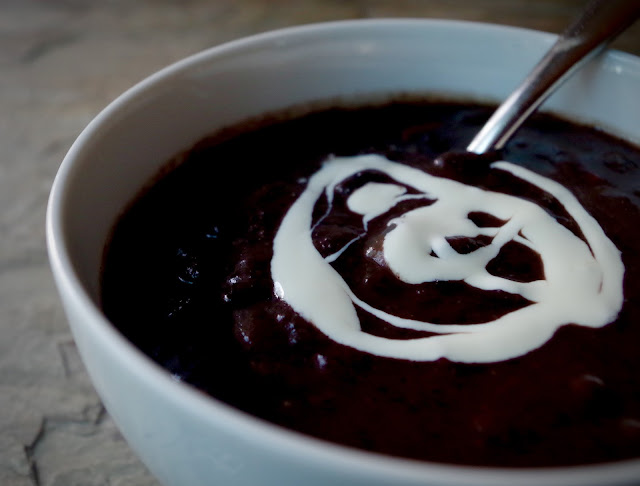 This cookbook is packed with mouthwatering recipes, including Shrimp and Scallop Seviche with Shredded Plantain Chips, Ribs with Guava BBQ Sauce, Steamed Cuban Beef Buns, and Savory Goat Stew. The book boasts these lovely essays on "Organoponicas" (the organic farms that have been springing up all over Cuba), "Rations," and the "Barrio Chino de la Habana" (Havana's Chinatown). These essays are as engrossing as the photography and recipes.

With the borders to Cuba a bit more relaxed, although not fully open to Americans, it's easier and easier to get to Cuba and to Cuban food. But for those of us who don't have a visit to Cuba planned, this cookbook is a plentiful attempt--from food to photography to essays--to recreate the tastes of the largest island in the Caribbean. 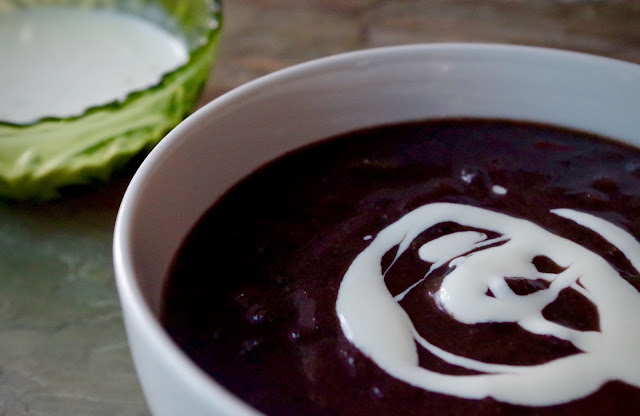 The perfect time to settle in with a homey, satisfying soup and to warm those chilled bones. 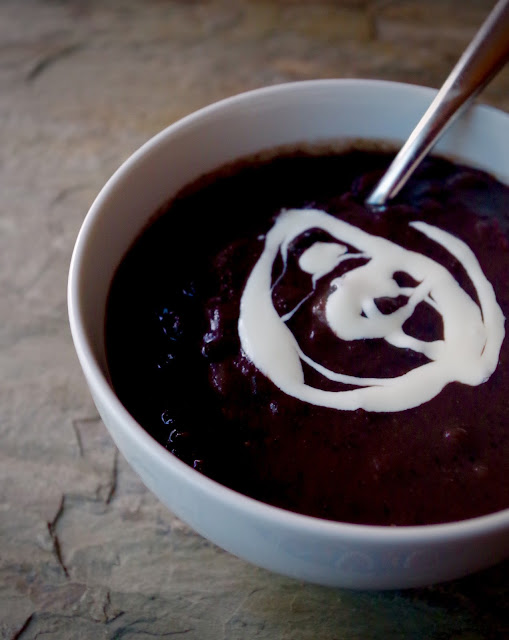 Adapted from ¡Cuba!: Recipes and Stories from the Cuban Kitchen

Instructions:
1. Put the beans, the halved onion, the halved pepper, and the bay leaves in a large bowl and cover with water by at least 3 inches. Place the pot in the refrigerator overnight.

2.  Pour the beans and their soaking liquid (including the onion and green pepper) into a large pot. Ensure that the water covers the beans by 1 inch, adding or removing water as necessary. Bring the water to a boil and then simmer until the beans are tender 50-60 minutes. Stir in the salt.

3.  As the bean simmer, make the sofrito. Heat the oil in a large skillet over medium heat. Add the diced onion, bell pepper, and jalapenos and cook until softened, about 10 minutes. Stir in the garlic and cook until fragrant, about 2 minutes more. Stir the sofrito into the beans.

5.  Add the chicken stock. Bring the soup to a simmer and add the oregano, cumin, and vinegar. Simmer for 30-45 minutes, until beans are soft and falling apart.

6. In a medium bowl, whisk together the crema, lime juice, and lime zest. Season with salt.

7. Serve the soup with a dollop of the lime crema. 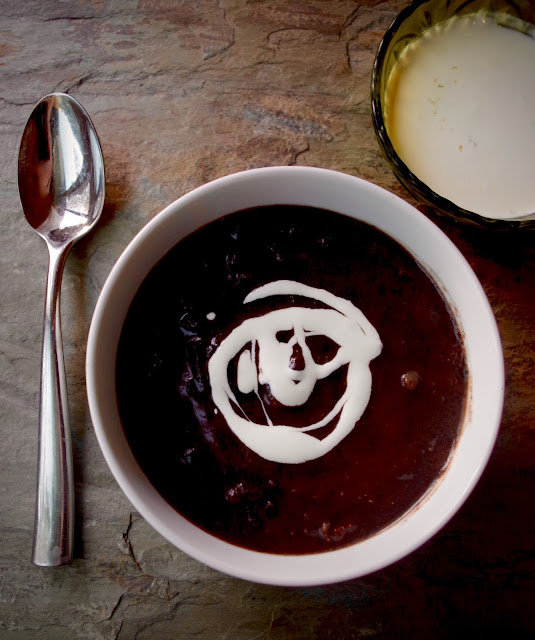