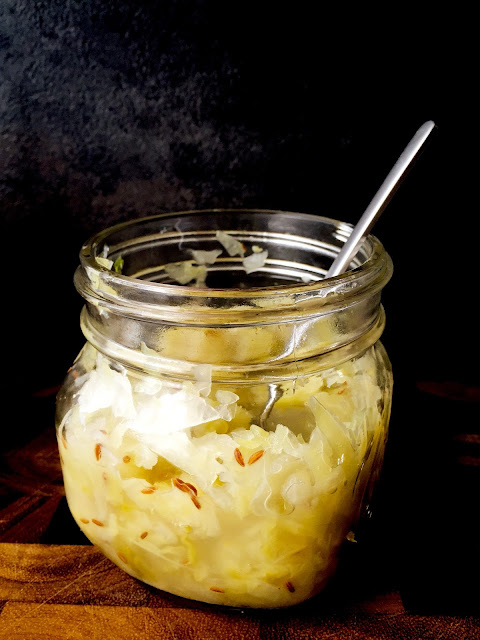 So if you're in Ohio, West Virginia, or Pennsylvania, and you're from German stock, you just might be eating what we are slurping down today--Brats and Sauerkraut.

Like many good luck foods that usher in a new year, the German tradition of eating pork and sauerkraut come from a long and superstitious line. From hoppin' john to New Year's doughnuts (I love the Dutch!), feasts of good luck are served all over the world.

But let's face it: the main reason we're eating this dish is because the sauerkraut is darned good. Especially if you make it yourself. 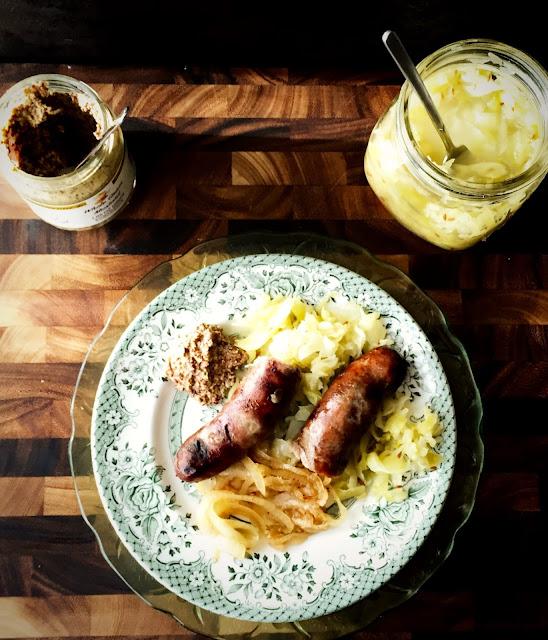 Okay, let me take a long divergence into the world of fermentation--a world where sauerkraut is a resident. I am learning how to make small batch kombucha, something I have been wanting to do for a while. I am on my third batch. The first was a massive success in terms of taste, but my scoby didn't grow. So I did a little reading, and it's possible that I didn't let my first batch sit long enough.  So I let the second batch sit for a month. And I am saying this lightly, but my second batch was an utter and complete failure. A disaster. Full on disgusting.

So I went back to Preserved, which is my favorite shop in Temescal, and got some tips:
I'll keep you posted. (And I mean that literally. Once I get this kombucha thing down, I'll write a post.)

But what I love about this foray into the wild world of fermentation is the continuous surprise that fermented foods bring. Mostly that sense of surprise is of the "I cannot believe I made this" variety. Like, "this is implausible" gasps of delight. But also there is the surprise of "hmm, I wonder which bacteria I am injesting." And "wow, there are a lot of microbes out there. Guess I have to trust in them. I am not so good with blind trust. Let's eat this anyway."  And "I hope I don't die." It's fun. 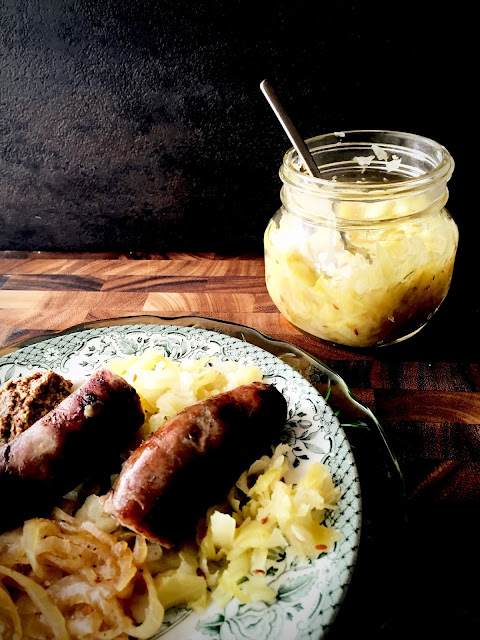 Enter homemade sauerkraut. Gone are the days of soggy masses of limp and colorless veggies. Welcome, instead, slightly crisp, thoroughly tangy cabbage with a bite that adds a kick to any sandwich or brat.

Okay, I love sauerkraut, especially on a bratwurst. It's the German in me. The Chicagoan in me (although Chicago's call to kraut is more decidedly Polish than German). My family hails from a long line of Pennsylvania Dutch who meandered from the East Coast to Missouri and then up into Illinois. Further, my mom's last name is about as northern German as they come. A good part of me is definitely German. (Another part of me claims Flemish and British, but today, we're embracing the German.) 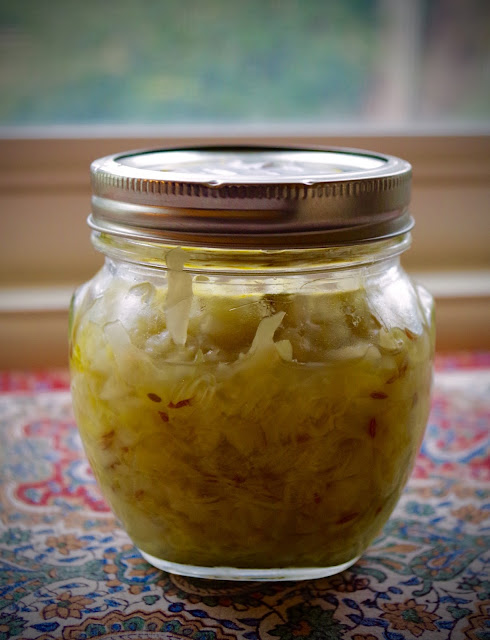 However, being German wasn't always something to parade (boy, our country has a pretty bad rap when it comes to inclusion, huh? I could get all political here, but I am going to refrain. It being the new year and all). From an early-20th-century refusal to teach German in schools to a boycott on German goods, WWI had some pretty big anti-German sentiment (as the US along with Europe threw its big arms around Nationalism). And check this: during WWI, sauerkraut was renamed Liberty Cabbage because people just didn't want to be associated with something that sounded German (indeed, sauerkraut was the Freedom Fries of the 1910s). (Also hamburgers became liberty burgers. I kid you not.)

But call it whatever you will--sauerkraut, liberty cabbage, zuurkool (Dutch), choucroute (French)-- take the time to make your own small batch sauerkraut and you'll be glad you did. And when I say "small batch" I mean, take 10 minutes to massage some salt into one head of cabbage and you'll have 1 mason jar full of sauerkraut.

So what's going on when it comes to the kraut? Well, enter Kitchn to explain it to us:

"Lactobacillus is one of those bacteria [found on the surface of cabbage], which is the same bacteria found in yogurt and many other cultured products. When submerged in a brine, the bacteria begin to convert sugars in the cabbage into lactic acid; this is a natural preservative that inhibits the growth of harmful bacteria."

And sauerkraut is one of the easiest entrees into the fermentation world. While you can mess it up (and don't worry, I am pretty likely to do so), it is a pretty forgiving process. Plus, you don't need any fancy equipment. In fact, Tess Ward's recipe below requires a bowl and a plate with weights on it.

I do have some fancy equipment because this fall, my father-in-law gave me this thing (see below photo) that I have no idea what to call for my birthday. I was calling it my spring-loaded shot glass. But it's much better than that. It's a spring-loaded weight that fits inside a wide-mouth mason jar. Perfect for small batch sauerkraut or kimchi (ah, kimchee! I plan to make that next (stay tuned)).

This is about as simple as it gets.

So today, for the new year, after the husband and I went for a simple little hike in Tilden Park, we came home to a typical Pennsylvania Dutch lunch. 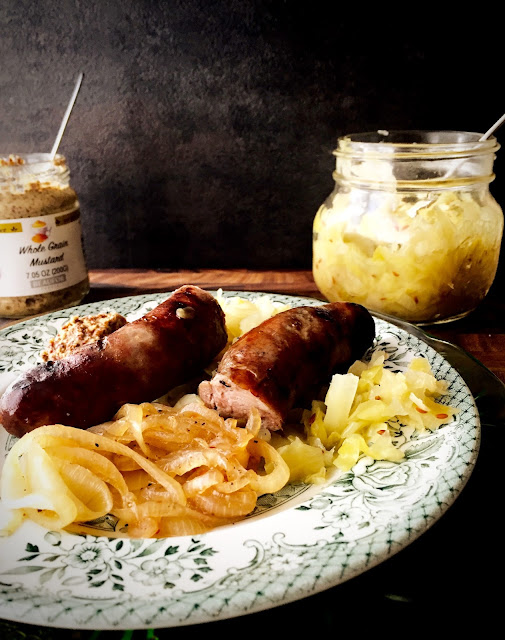 Instructions:
1. Cut the cabbage into quarters and cut out the core. Thinly slice each quarter into ribbons.

3.  Weigh the cabbage down with a plate slightly smaller than the bowl and place a heavy object on the plate. Cover the bowl with a cloth and secure it with a rubber band (this keeps dust and bugs out but airflow in and out).

4.  Let the cabbage ferment at room temperature (65-75 degrees) away from direct sunlight for 7-10 days, pressing down on the plate every so often in the first 48 hours. You want to ensure that the cabbage is submerged in the liquid it puts out.

5.  Begin tasting the sauerkraut after 7 days. Once you get the taste you like, put it in the refrigerator. Transfer to sterilized, dry jars and store for several months (longer if refrigerated).

(Bonus recipe for beer-boiled brats, but seriously, the sauerkraut is something you should make often and on its own.)

2.  Combine the beer, onions, chile flakes, garlic, salt and pepper in a medium pan (large enough for the brats). Bring to a boil. Reduce heat to medium, submerge the brats, and cook for 15-20 minutes.

3.  Remove the brats from the onion and beer mixture; reduce heat to low. Continue cooking the onions until the beer has mostly evaporated.

4.  Cook the brats on the grill, about 5-10 minutes.  Serve with the onion mixture, sauerkraut, and mustard (and a good toasted roll if using).
Bratwursts Cabbage Caraway Seeds Garlic Pork The Naked Cookbook