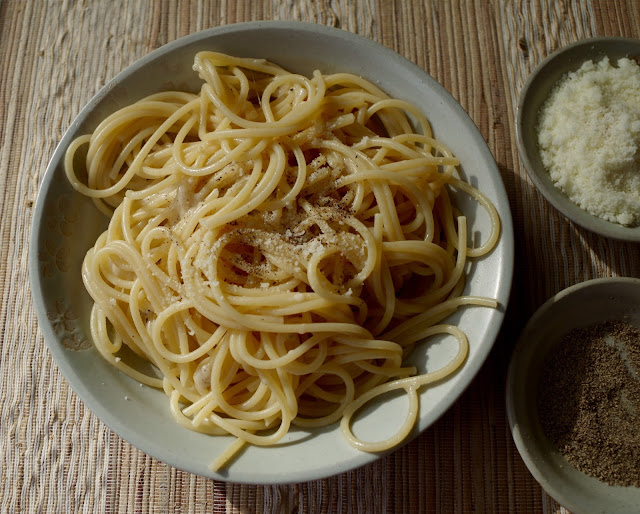 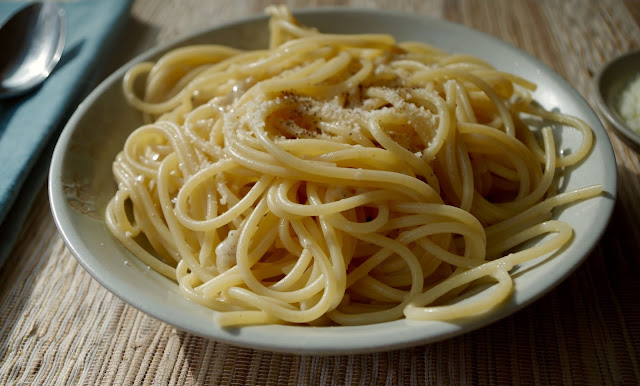 Sounds like we're talking Spaghetti with Cacio e Pepe, my favorite pasta ever, especially if eaten while snuggled up with family at Osteria del Gallo in Rome, and more easily found in Katie Parla and Kristina Gill's delightful new cookbook Tasting Rome. 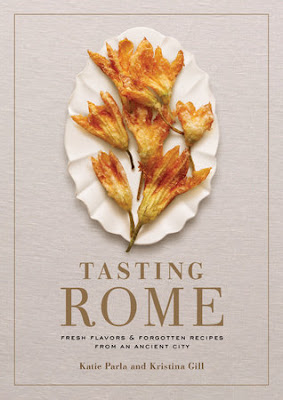 With lovely little essays that span the history of Roman cuisine (not surprising since Parla's graduate degree is in Italian gastronomic culture), the book has stunning photography (not surprising given that Gill is a Rome-based freelance photographer) and definitive travelogues through different areas of Rome, including Testaccio, the historic Jewish quarter, and the some 120 mercati rionali.

A small requirement for this cookbook: you should love guanciale and fennel pollen and pecorino romano and peperoncino and of course pasta. Such loves are not problematic for me, so I suspect that I'll be trotting this cookbook out multiple times this spring.  You see, there are Fried Cod Fillets (Filetti di Baccala), Babolotto all'Amatriciana, and Almond and Cinnamon Biscotti (Biscotti con Mandorle e Cannella), and a whole litany of cocktails to make. Cocktails! There is a backyard calling my name in a slight Italian accent! 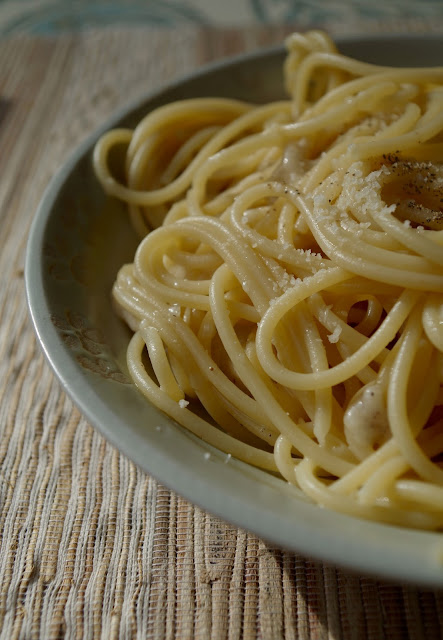 Okay, back to the pasta. Cacio e Pepe is quite trendy these days. You'll find it on popcorn, pizza, and rice.  But if you want to make it at home (because you cannot get to Rome or you're just handy that way), you'll need finely grated Pecorino Romano, or known as cacio, the local Roman dialect word for this hard, sharp and salty sheep's milk cheese. You're also going to need very hot starchy water and a fast hand. If the water cools before melting the cheese, it will clump. 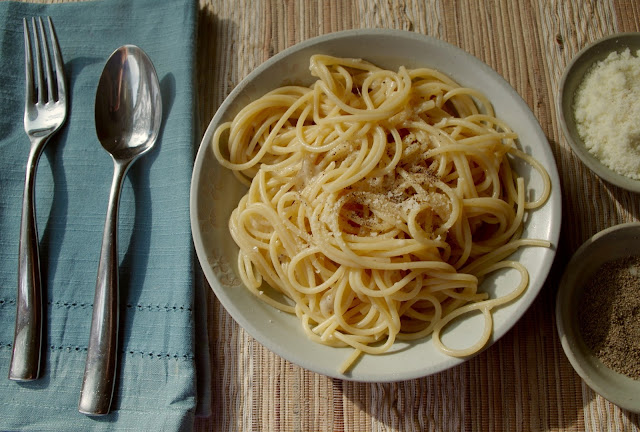 Which mine did.  In fact it seized up, giving me lumps of cheese and then a watery base.

Which is not concerning to me. It just means I need to make this again.

Or go to Rome.


Adapted from Tasting Rome: Fresh Flavors and Forgotten Recipes from an Ancient City

Instructions:
1. Bring a large pot of water to a boil over high heat. Salt the water. Add the pasta and cook until al dente.

2.  Meanwhile in a large bowl, combine 1 1/2 cups of the Pecorino Romano, the pepper, and a small ladle of the pasta-cooking water. Using the back of a large wooden spoon, mix vigorously and quickly to form a paste.

3.  When the pasta is cooked, use a large strainer to remove it from the cooking water and quickly add it to the sauce int he bowl, keeping the cooking water boiling on the stove. Toss vigorously, adding additional hot water a tablespoon or two at a time as necessary to melt the cheese and to obtain a velvetty sauce that completely coats the pasta.

4. Plate and sprinkle each portion with some of the remaining Pecorino Romano and pepper to taste.  Serve immediately.
Blogging for Books Cheese Pasta Tasting Rome

As promised here are these sweet little scones from  Miette .  I have written about my delight in Miette ( see here ), and so it was a no-brainer when I needed to whip up a vehicle for Strawberry Vanilla Jam. And these did not disappoint. Shall we explore the history of the scone, you and I? There's a lot of information out there about the scone. As in a lot, so let's see if I can round some of it up. The scone was originally a Scottish quick bread made with oats and then griddle-fried. The scone distinguishes itself as not utilizing yeast, as one might expect from other tea pastries, such as a tea cakes or sweet buns. Instead, this well-leavened pastry uses baking powder to achieve its heights. However, baking powder is a relatively recent invention, so scones probably soared using buttermilk as a boost. Now don't get all confused about "high" and "low" or "afternoon" tea. Americans (and their representative tea rooms) lik
Read more