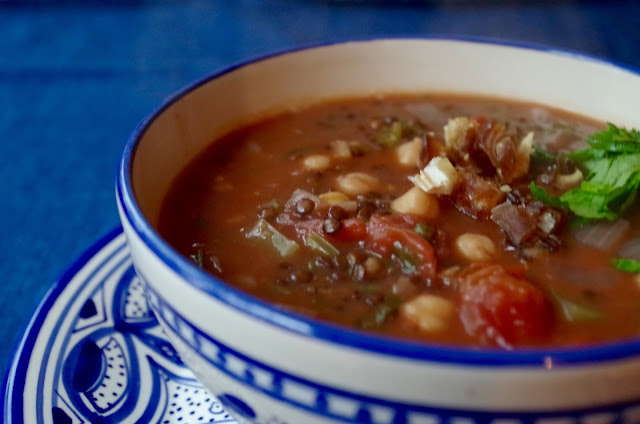 Winter is officially over, but there are gray days still happening. We all know I love gray days, and gray days call for soup.


Harira is a Northwest African soup generally served during Ramadan as way to break the daily fast. Typically made with small chunks or strands of lamb, this stew erupts with fragrant herbs and spices--including ginger, saffron, cinnamon, paprika, cumin, and red pepper--and thickens late in its cooking with a swirl flour and water. It bursts with complex flavor, satisfying chickpeas and lentils, and unexpected pasta.

And, Heidi Swanson, in her latest cookbook, Near and Far, makes this hearty dish into a flavorful vegetarian option that doesn't make you miss the lamb at all. 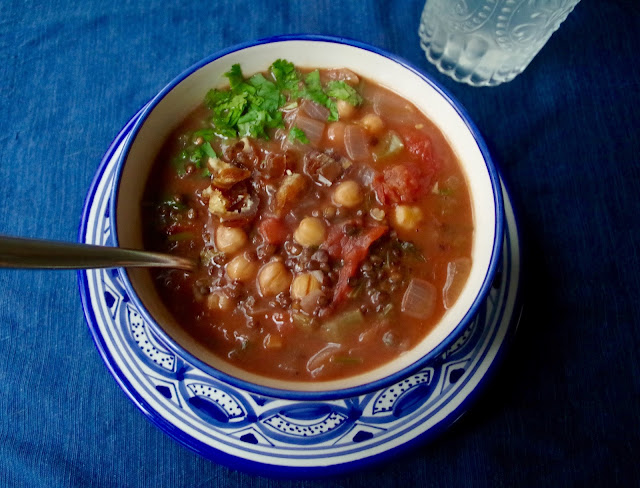 There is no doubt Swanson has a huge following of devoted home cooks (or take-out orderers who happen to read blogs for fun). Her blog certainly paved the way for those, like me, who have too many cookbooks, perhaps too little time, and a penchant for writing and photography. Her cookbooks are as delightful as her almost daily musings, and like many, I have copies of them all.

Thankfully, I have The Bowl whenever we're in the Bay Area. However, I know that this is not a cookbook I'll be lugging up the coast, where the grocery stores--while still impressive--lack some of these edibles. 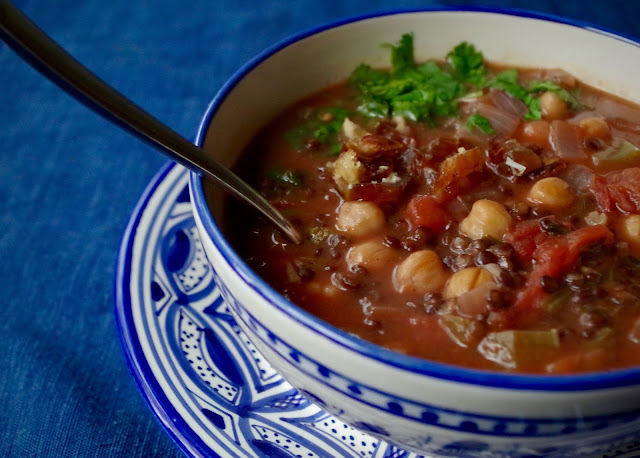 Rest assured, however, that this stew can be made with what we probably all have on hand--some beans and pasta, maybe some lentils--but will require a quick jaunt to the store for usually easy-to-find saffron and fresh veggies. Once you have gathered all your goodies, this soup comes together with ease and a little time.

And it makes way more than you think it will make. In fact, we halved the recipe, and I had two days of lunches at the ready. 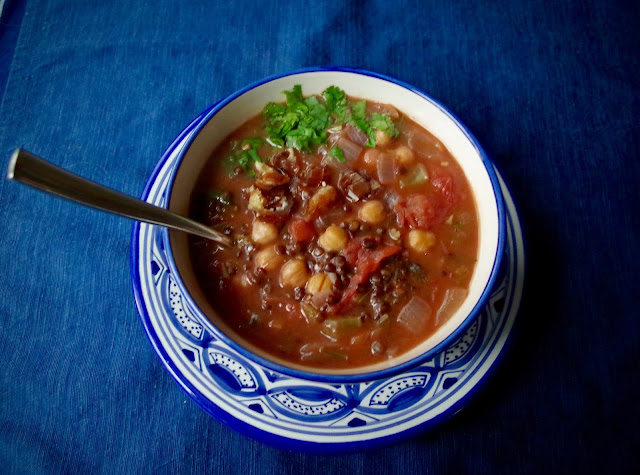 While Ramadan doesn't begin until June this year, Swanson's take on this soup is certainly worth whipping up, for a pot of this bubbling away on your stove will stave off any lingering winter colds as we move into spring. Gray days, sunny days, whatever your late March and early April days bring.

-------------
Vegetarian Harira
Adapted from Heidi Swanson's Near and Far: Recipes Inspired by Home and Travel

Instructions:
1. Chop the cilantro stems finely and set aside in a pile. Chop the leaves and reserve separately. Heat several spoonfuls of the olive oil in a large soup pot over medium-high heat. Add the onions, celery, crushed garlic, ginger, and cilantro stems, stir to coat, and cook until everything softens a bit, 5 minutes or so.

2. Add the saffron, salt, cinnamon, sweet paprika, red pepper flakes, and cumin to the pot. Stir well before adding the chickpeas and lentils. Stir in 4 cups of the water and bring to a simmer.
3. In a separate large bowl, gradually whisk the remaining 2 cups of water into the flour, a little at a time to avoid lumps. Add the lemon juice, tomatoes with their juice, and most of the remaining cilantro. Stir well, breaking up the tomatoes somewhat. [I did this with my hands, breaking up the tomatoes as I went.] Add this mixture to the soup and bring to a simmer, stirring often. Once at a simmer, cook for another 15 to 20 minutes, stirring occasionally, until the lentils are cooked through.

4. When you have about 5 minutes left, stir in the oregano (or marjoram) and pasta. Once the pasta is cooked, adjust the seasoning and serve topped with dates, the remaining cilantro. Drizzle each portion with some more olive oil and serve.
Celery Chickpeas Dates Flour Garlic Ginger Lemon Lentils Near and Far Onion Pasta Saffron Tomatoes