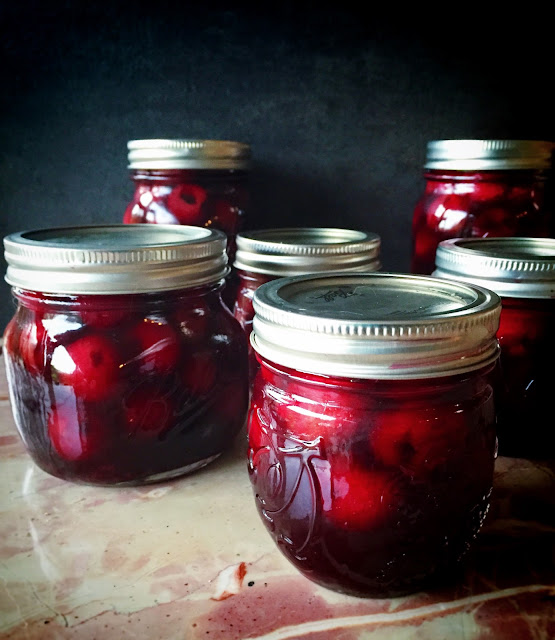 It's cherry season!  That short window of spring that begs you to buy as many cherries as you can, spend an afternoon sitting on the back deck pitting them, and then eating them as many ways as possible. Mostly straight from the bowl.

But here's one way to preserve your cherries so you can savor them come December, if necessary. (But we both know you're not going to make it to December with these jars of cherries. We will all be lucky if we can make it to July with any jars left.) 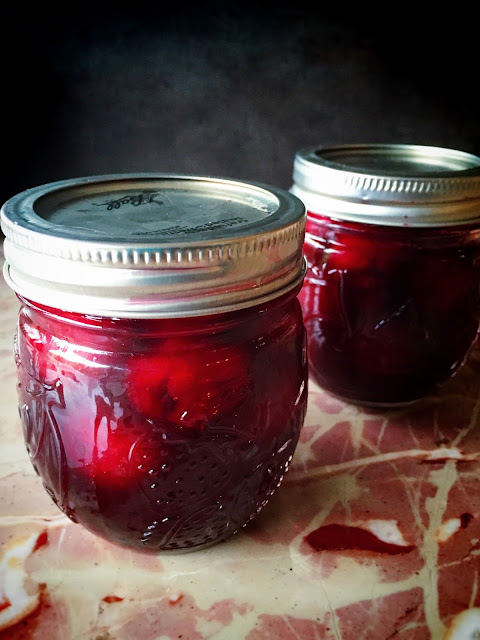 In the latest entry in Marisa McClellan's Mastery Challenge, I give you McClellan's own Bing Cherries in Red Wine Syrup. Or at least my version of it.

(This mastery challenge has been great fun, and this month is cold pack preserving.  Admittedly, lately, it has been hard to keep up, but I believe this is mostly a function of the end of the school year.  Be prepared for summer, people!

Right. Cold-pack canning.  It's relatively simple.  Take some raw fruit or veggie and stuff it into a jar. Cover it in hot liquid high in acid or sugar. Can. Set. Repeat.  Want to learn more about why you should start cold pack preserving? See here.) 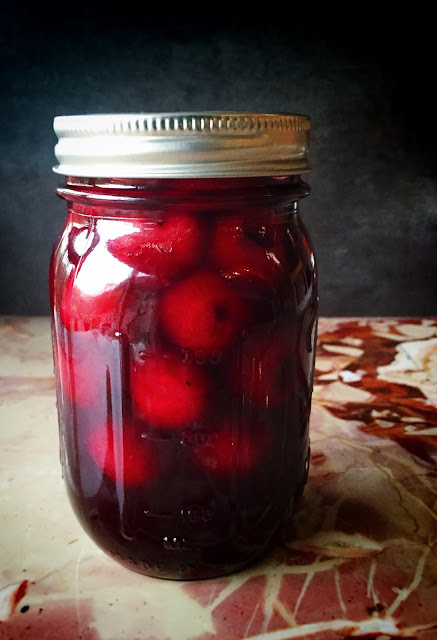 Reminiscent of sangria, this syrup is sweet and warm and floral--and while I often think of sangria as a summertime drink, if you can make it to the winter with these jars, these cherries beg to be brought out for the holidays. There's a aromatic, deep, and almost wintry quality to these fruits once you soak them in wine and oodles of vanilla. I want a fire. Perhaps some twinkling lights. And maybe some evergreen boughs. 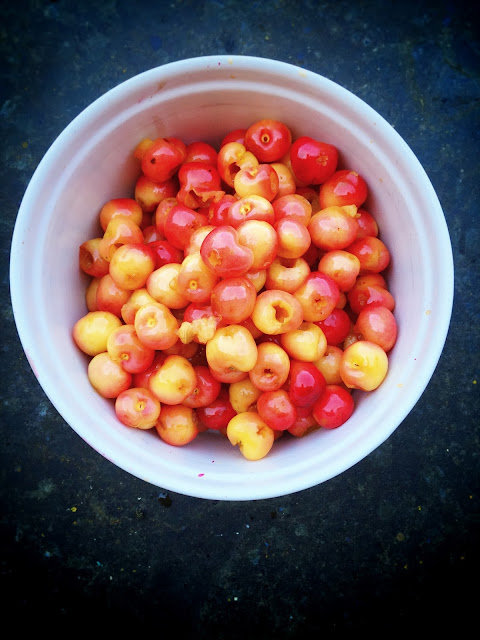 No matter the time of year, the cherries and a little of their syrup is perfect for topping over ice cream or pound cake. But the syrup also works like a charm in a glass of sparkling water. Or drop a singular cherry into an Old-fashioned or a Manhattan. Or play around with a Mojito until you have created your own singular cereza mojito. I suspect you will not be able to go wrong with these. 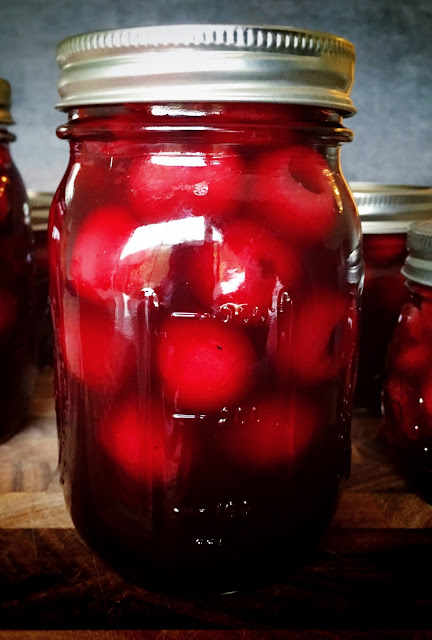 I sent two jars (along with one jar of these preserved lemons) up the coast with a foodie friend of ours from Seattle who is currently engaged in a road trip with the husband to see one of their favorite late-80s, early-90s band. That means I still have four jars left. I guess that will get me to June. 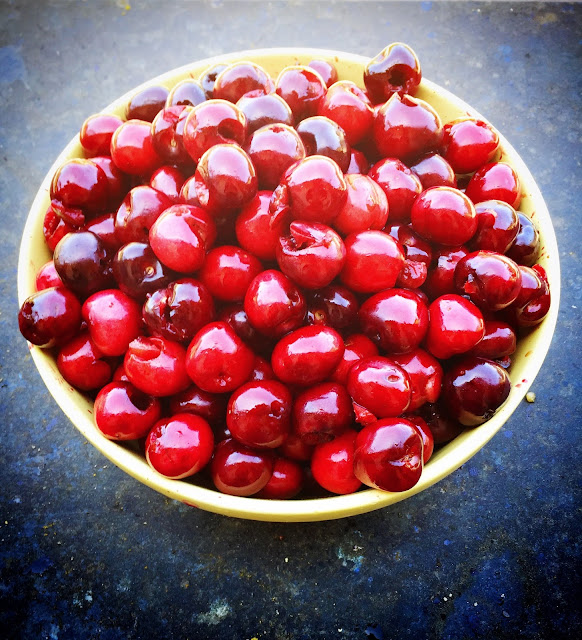 Yield
Makes about 4 pints
Ingredients
2 cups red wine (any relatively inexpensive but drinkable red wine will do).
1½ cups sugar
1 vanilla bean, split and the seeds scraped
zest of 1 lemon
4 pounds of cherries, pitted (I used both Bing and Rainier)

Instructions
1. Prepare a water bath and 4 regular-mouth 1-pint jars and their lids (see below).

2.  In a medium saucepan, combine the red wine, 1 cup of water, the sugar, the vanilla bean and its seeds, and lemon zest. Bring to a simmer over medium heat, stirring until the sugar is dissolved. Remove the vanilla bean.

3.  Pack the pitted cherries tightly into the prepared jars and pour the hot syrup over the top, leaving ½ inch of headspace. Gently tap the jars on a towel-lined countertop and use a chopstick to pop any air bubbles.

4.  Wipe the rims, apply the lids and rings, and process in a boiling water bath for 25 minutes (see below).

To Sterilize the Jars:
1.  If you're starting with brand new jars, remove the lids and rings; if you're using older jars, check the rims to ensure there are no chips or cracks.

2.  Put the lids in a small saucepan, cover with water, and bring them to a simmer on the back of the stove.

3.  Using a canning rack, lower the jars into a large pot filled with enough water to cover the jars generously. Bring the water to a boil.

4.  While the water in the canning pot comes to a boil, prepare the cherries and wine (or whatever product you are making).

To Seal the Jars:
1.  Carefully fill the jars with the cherries (or any other product). Leave about ½-inch headspace (the room between the surface of the product and the top of the jar).

2.  Wipe the rims of the jars with a clean, damp paper towel.

3.  Apply the lids and screw the bands on the jars to hold the lids down during processing. Tighten the bands with the tips of  your fingers so that they are not overly tight.

4.  Carefully lower the filled jars into the canning pot and return the water to a boil.

6.  When the timer goes off, remove the jars from the water. Place them back on the towel-lined counter top, and allow them to cool. The jar lids should "ping" soon after they've been removed from the pot (the pinging is the sound of the vacuum seals forming by sucking the lid down).

7.  After the jars have cooled for 24 hours, you can remove the bands and check the seals by grasping the edges of the jar and lifting the jar about an inch or two off the countertop. The lid should hold in place.

8. Store the jars with good seals in a cool, dark place. And jars with bad seals can still be used, just do so within two weeks and with refrigeration.
Alcohol cherries Food in Jars Food in Jars Mastery Challenge Sugar Vanilla Wine