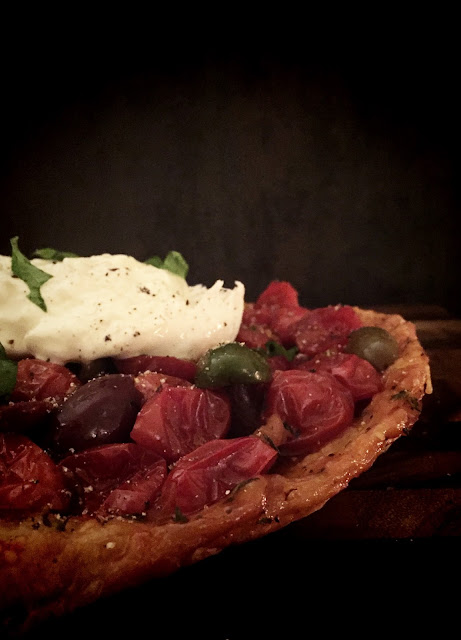 In a last hurrah to summer and, perhaps, even to the fall, I present to you this lovely tomato tarte tatin. And I wistfully bid farewell to tomatoes, or at least good ones, until next July. In the meantime, let's just drink Pimms Cups with cucumbers (probably from the hothouse) with good friends, cook from fun cookbooks, and settle in for the winter. 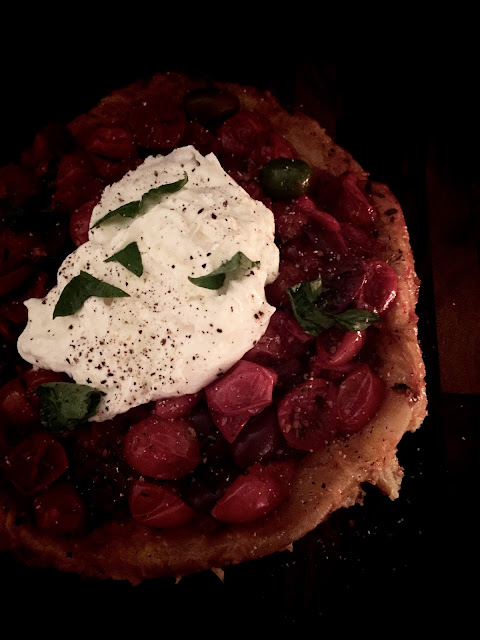 This little inspiration comes from my latest acquisition, The Cottage Kitchen cookbook from Marte Marie Forsberg. Forsberg is one hell of a photographer (seriously, if you didn't click on her link in the previous sentence, do so now.  I'll wait.)--her images are lush and abundant and inviting and casual and snug--something like a Dutch Renaissance painting. Oh, I want to visit her cottage in England. I want her to make me dinner. I want her to photograph said dinner. Sigh. 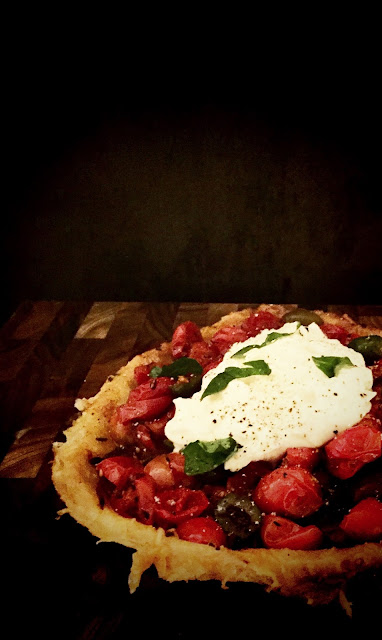 Her cookbook is equally lush. And it gives the air of casualness, but I am not going to lie to you. It is extravagant. I want to eat Foie Gras and Kidney Bruschetta with Parsley; I can convince myself I need Black Pudding with Scallops and Caviar; who doesn't hanker for Grilled Lobster with Lime and Cilantro Butter? Lest you think this cookbook is only for the rich of taste and of pocketbook, Forsberg tosses in such delights as Norwegian Waffles with Strawberries and Sour Cream and Fennel and Potato Soup, reminding us that simple starches are equally delightful.

Forsberg divides the cookbook into seasons, with photographs of frosty countrysides and of utterly snuggly white dogs in front of fogged-in gates that are framed by bare vines. Or of spectacular pewter cups being filled with Brandy Hot Chocolate with Cardamom (yes please).  I suppose she does make the coming winter look as equally good as she made the tail end of summer taste. 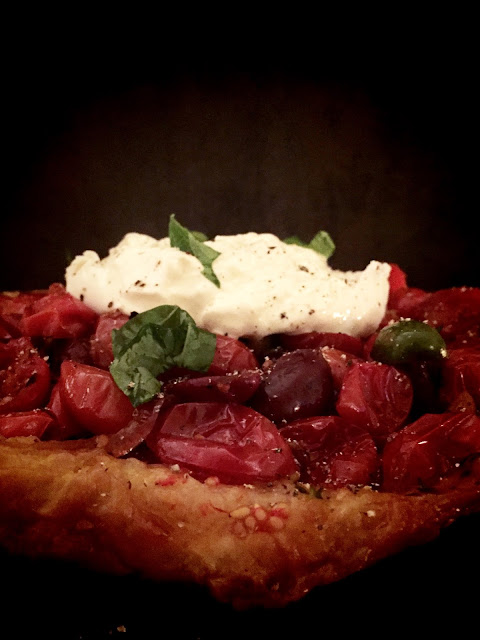 About the Tomato Tarte Tartin:

This is one of those dished that I will need to make again and again to get it just right, and I will enjoy the process of perfecting it. The tomatoes are salty and sweet and I think if you added some anchovies, you would not go wrong. Unless you are married to the husband, who is not an anchovies fan. However, I have a sneaking suspicion that I could sneak some in and he wouldn't even notice. He just thinks he doesn't like anchovies. He is wrong. 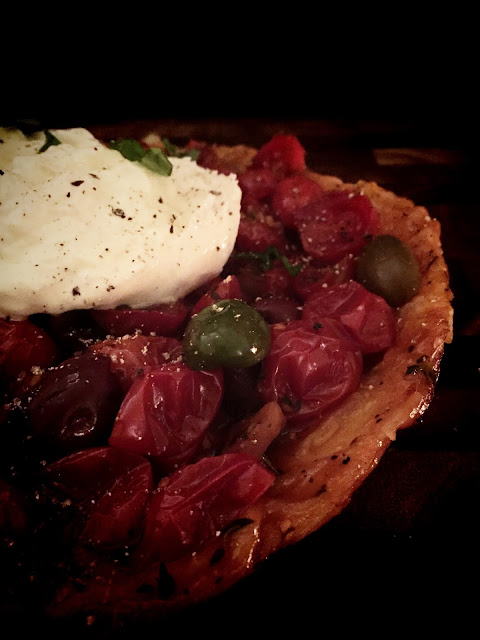 Also, I added the step to dry out the tomatoes a bit. In my photographed version here, you can see that the puff pastry got a little steamed rather than toasted. The taste was still lovely, but I wanted to bump up the texture a bit.

And finally, don't skimp on the burrata. That is a heavenly cheese. No doubt. However, if you have dear friends who are not cheese fans (what!), you can always put it on the side.

Okay, people, summer is officially over. Bring on the rain and the fog and the green hills. I am so ready. And let's crack open the winter section of The Cottage Kitchen because I can see some afternoons sipping Crema Catalana or a breakfast with a lashing of Forsberg's Lemon Curd in my future. I can tell. 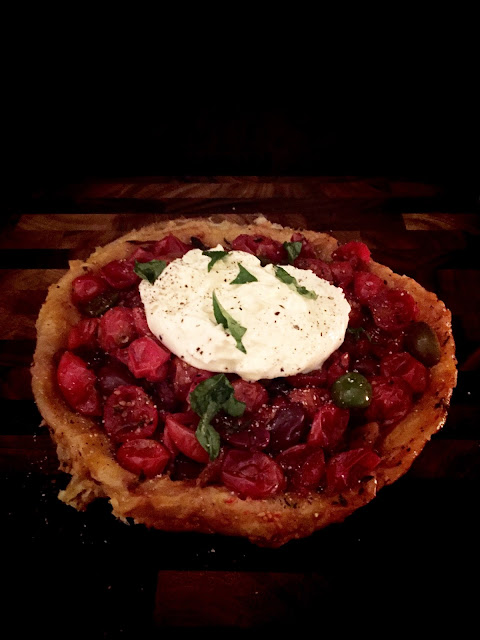 Adapted from The Cottage Kitchen

2.  In a large, ovenproof skillet set over low heat, cook the onions in the butter, stirring occasionally, until caramelized, about 15 minutes. Transfer to a plate and set aside.

3. In the same skillet, saute the halved tomatoes until they release their juices, about 5-6 minutes. Add the olives, thyme, salt and pepper.

4.  In a small skillet set over medium heat, bring the honey to a gentle simmer, and cook until warmed through and slightly thickened, 5-6 minutes. Add the vinegar and cook, swirling the pan until combined, 2-3 minutes. Add the honey mixture to the tomatoes and toss to coat.

4. Arrange the tomatoes into a heap in the middle of the skillet as much as you can, so you have room to tuck the pastry around everything. Pile the onions on top.

5.  On a lightly floured surface, roll out the puff pastry and cut into a circular piece just slightly larger than the skillet. Lay the pastry over the tomatoes and onions in the skillet and tuck any excess down under the vegetables.

6.  Place the skillet in the middle of the oven and bake until cooked through, 27-30 minutes. After removing the tart from the oven, let it cook for a few minutes longer before placing a large plate upside down on top of the skillet Using oven mitts, press the plate down and quickly flip the skillet and the plate so the skillet is update down and the tart dislodges onto the plate. Carefully remove the skillet.