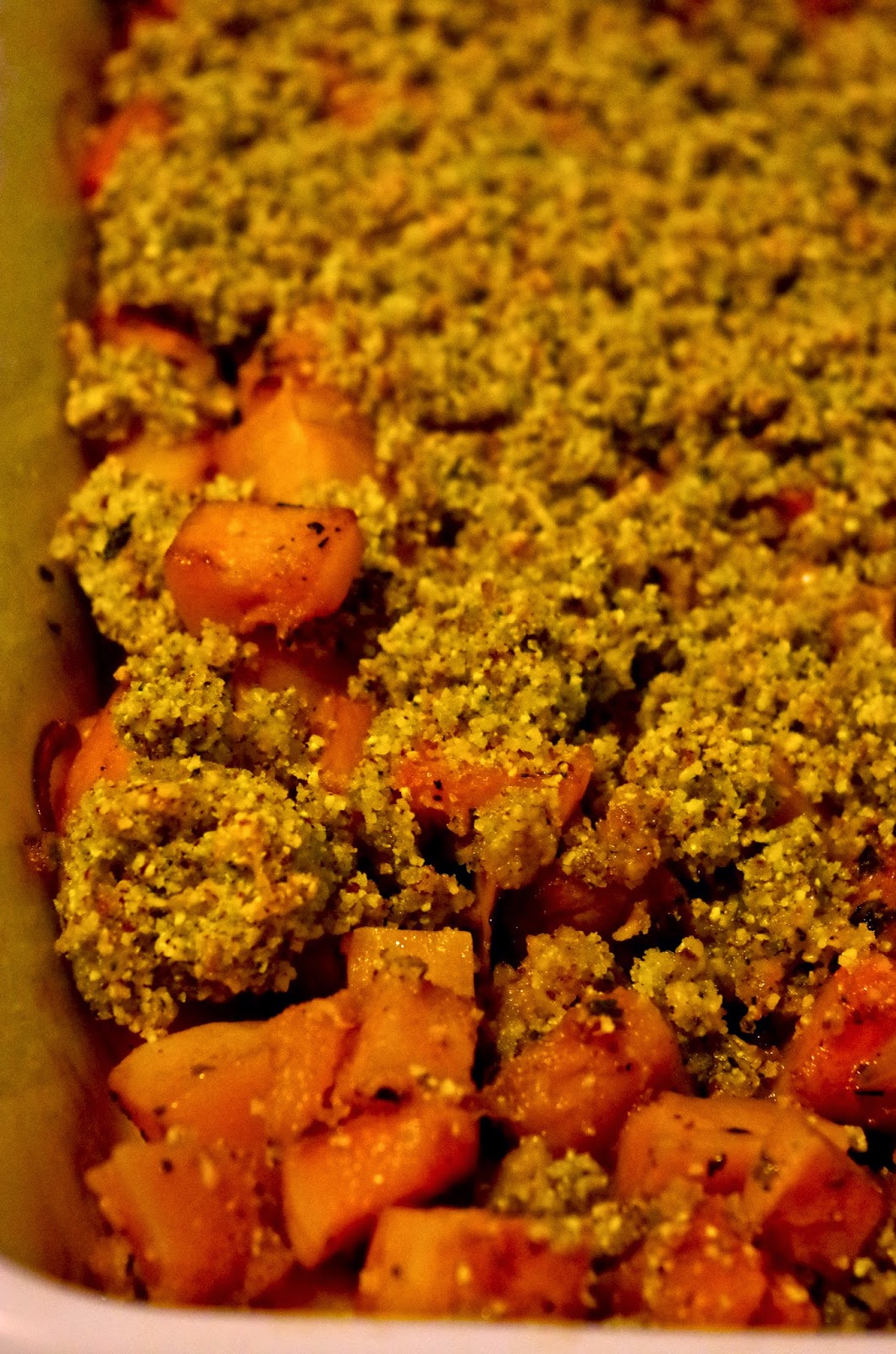 Oh, this past weekend was spent at the ocean. Well, technically, it was spent in a cabin in the woods, but last Sunday evening was spent on a winter run that ended with a winter sunset at a winter ocean, and let's face it, that was the highlight of this winter weekend. 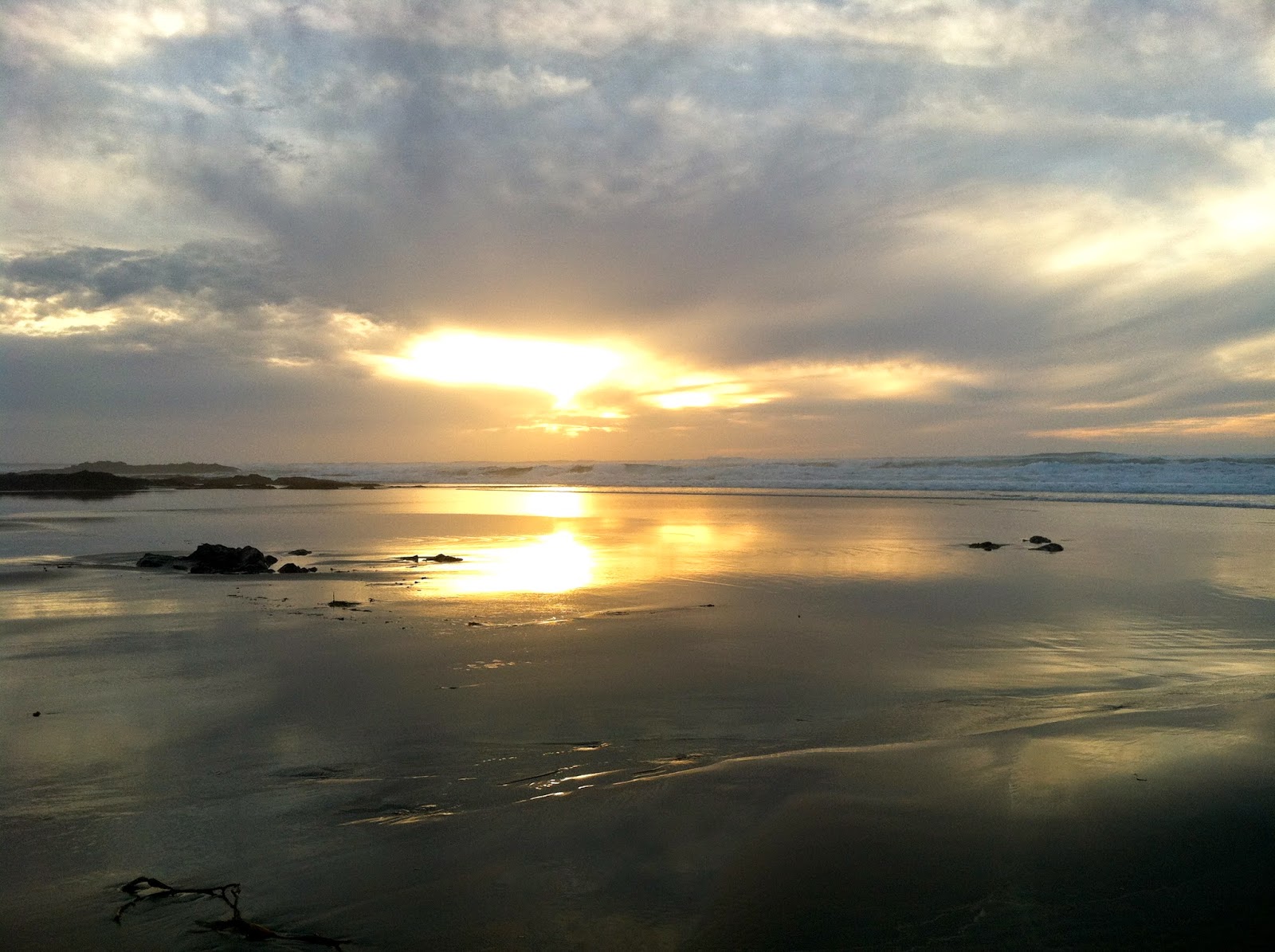 And, in addition to that wonderful sunset, yes, there was squash.

I do what I can, when I can, to eat squash, for my CSA sends it almost every week. I have roasted it with cardamom and nigella seeds, wrapped it in pastry, roasted it with dates and thyme, and pureed it into soup.


And this past weekend, I had it in a squash crumble, which is a savory equivalent of a crisp (as in what the Americans might think of when we think of Apple Crisp). Apparently, the Brits serve these crumbles in a swath of varieties and have been doing so since the middle of last century. Americans know them usually only under their sweet variety, but the Brits are onto something here: you don't always have to make a crumble sweet.

Now, that's something that I can easily get behind, and I believe most of my winter vegetables can get under. 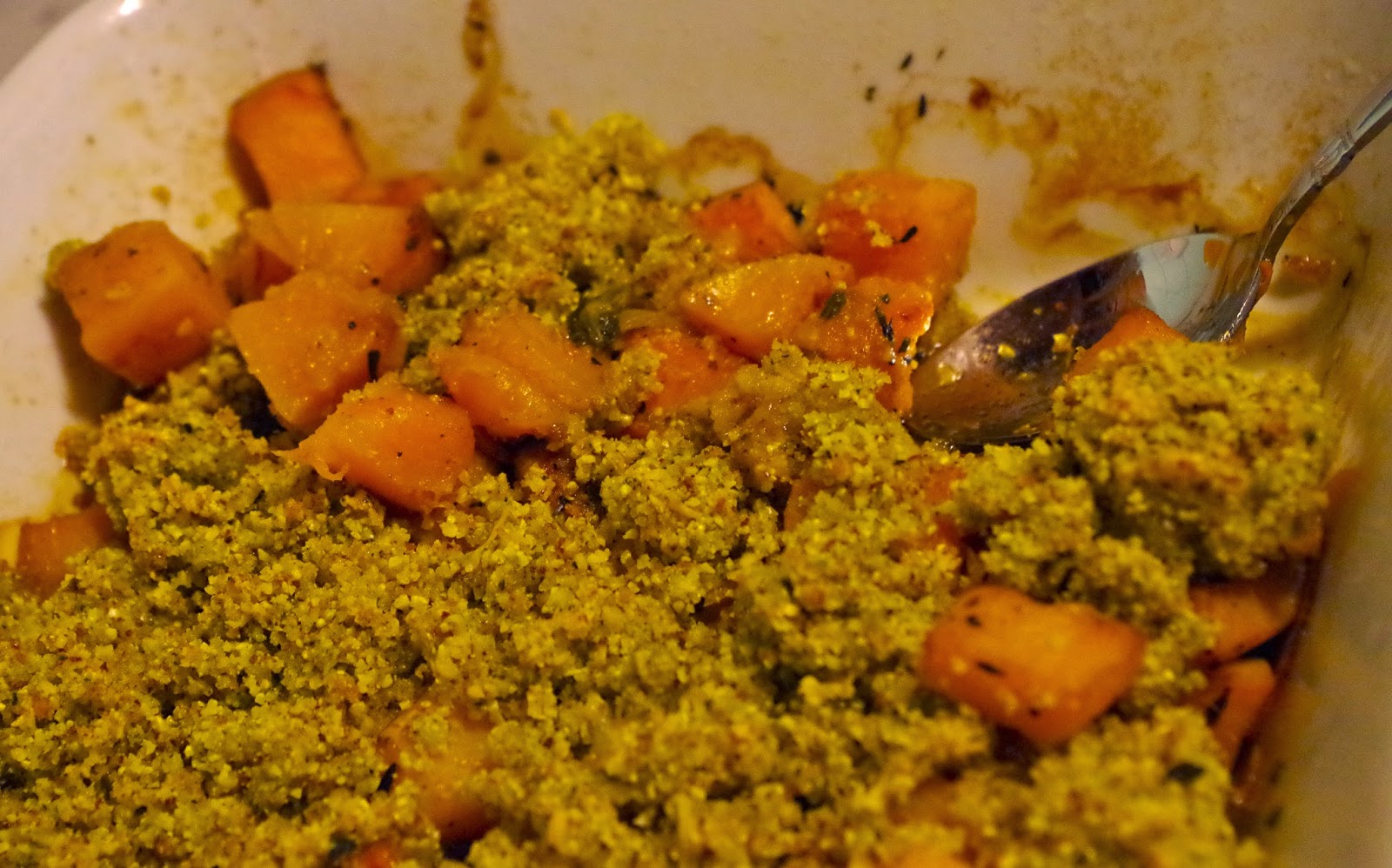 Seriously, the idea here is wickedly simple. Just bake your winter vegetable under a layer of butter, cornmeal and sage (some even add cheese), and your side vegetable has just taken care of itself. The crumble is easier to make than a pie, and the resulting sidedish has the comfort of a starchy topping and the sanctimoniousness of a vegetable (albeit sauteed in butter and oil).

However, all that said for the inventiveness of the British, this recipe does not come to us from our colonial forefathers. Instead, it comes to us by way of a former-Chez-Panisse-employed American who has relocated to France: David Lebovitz. 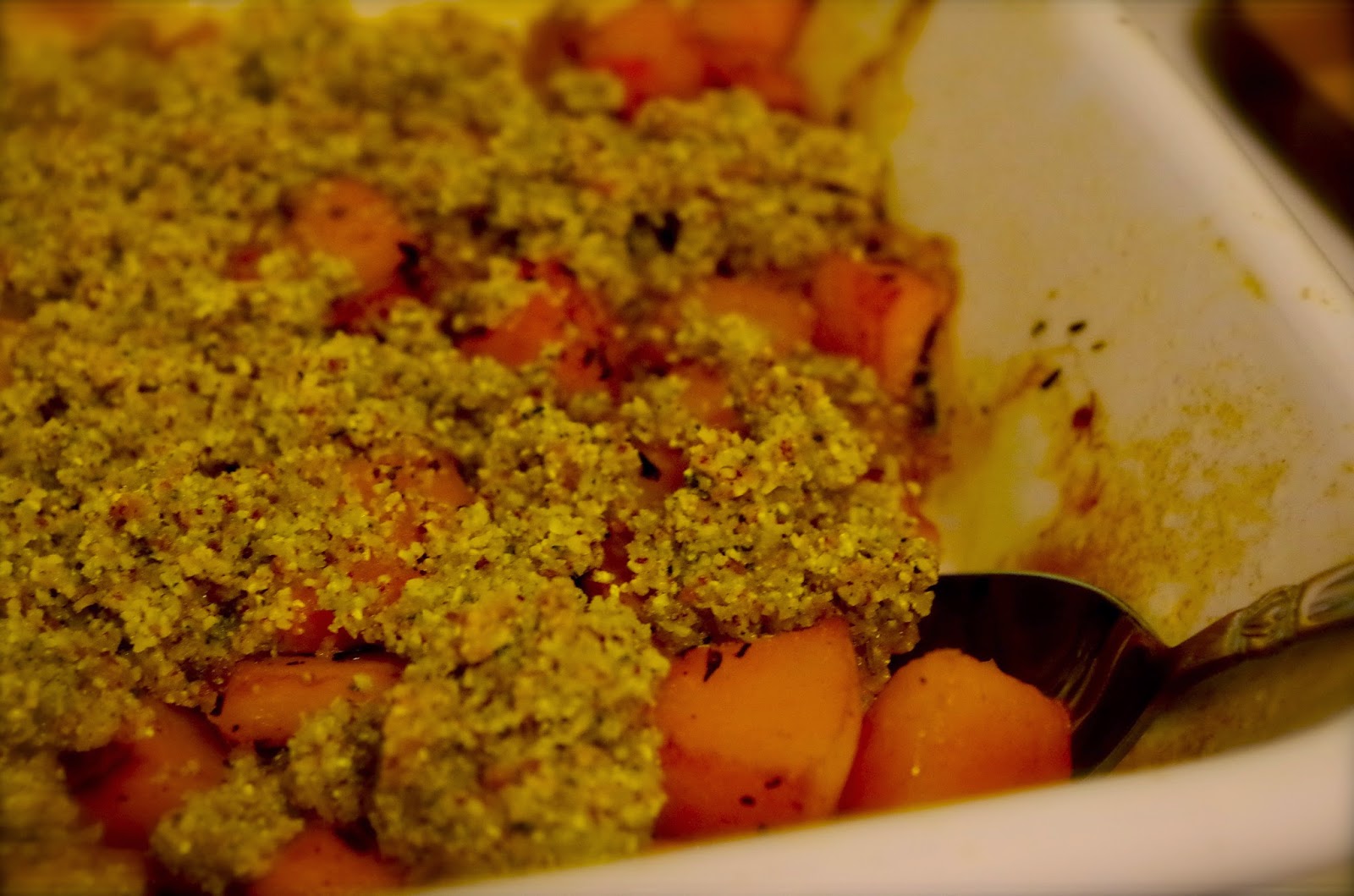 I have been hankering for the sixth of Lebovitz's cookbooks, My Paris Kitchen, for some time now, and finally I broke down and purchased it with a Christmas-given gift certificate.  Already I love this cookbook.  Given its subtitle (Recipes and Stories), it's not surprising that I (like so many others) have already read this cookbook cover to cover, without stopping to make even one recipe. The cookbook revels in Paris and its cuisine (from the classic Onion Soup to Coq au Vin) and Lebovitz tells delightful little stories of his adventures in France. Thus, on a winter evening in January, it seemed a lovely idea to finally splay open the cookbook on a kitchen counter (rather than in my lap while sitting on the couch) and try the Mustard Chicken--the very recipe featured in the cover photograph--next to a simple salad and this crumble offering on page 215.

Such a meal was a hearty huzzah (or should I say, as the French do, Hourra!) to winter and to the bounty of the CSA box.

Good thing I had already taken my run earlier in the evening. 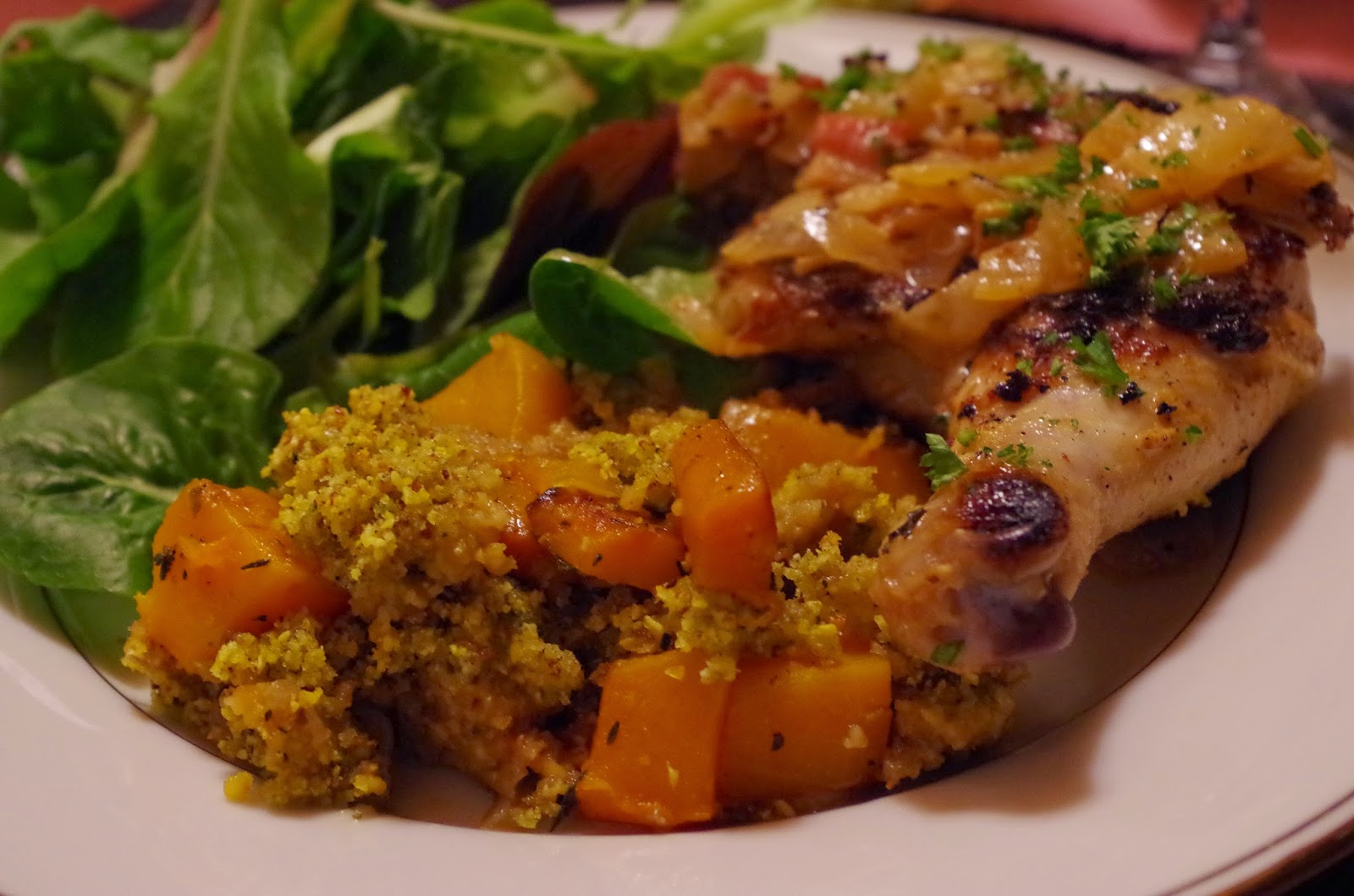 2.  To make the squash filling: Heat 1 Tbsp butter and 1 Tbsp olive oil in a large skillet over medium-high heat. Add half of the squash and half of the thyme. Season with salt and pepper and sauté, stirring occasionally, unit the squash begins to brown on several sides. Add half of the shallots and cook for another few minutes until they're soft. Add 1/2 cup of the chicken stock and cook for 30 seconds, stirring, to reduce the stock a little bit and heat everything through. Scrape the squash mixture into the prepared baking dish.

3.  Heat the remaining 1 Tbsp butter and 1 Tbsp olive oil in a large skillet over medium-high heat. Cook the rest of the squash and thyme the same way, seasoning it with salt and pepper, and adding the remaining shallots and 1/2 cup of chicken stock. Scrape the cooked squash into the baking dish, stir in the parsley, then press the mixture in a relatively even layer. Cover the dish with aluminum foil and bake for 30 minutes, until the squash is tender.

4.  To make the topping: While the squash bakes, combine the bread crumbs, cornmeal (or polenta), Parmesan, sage, sugar, salt and black pepper in a food processor or blender. Add the chilled butter and pulse until the mixture is crumbly and the butter is completely incorporated. Add the egg and pulse a few more times until the mixture just starts clumping together in bits.

5.   Remove the squash from the oven, remove the aluminum foil, and cover evenly with the bread crumb topping. Decrease the oven temperature to 350 degrees and return the dish to the oven. Bake about 20 minutes, until the topping is golden brown, and then serve.