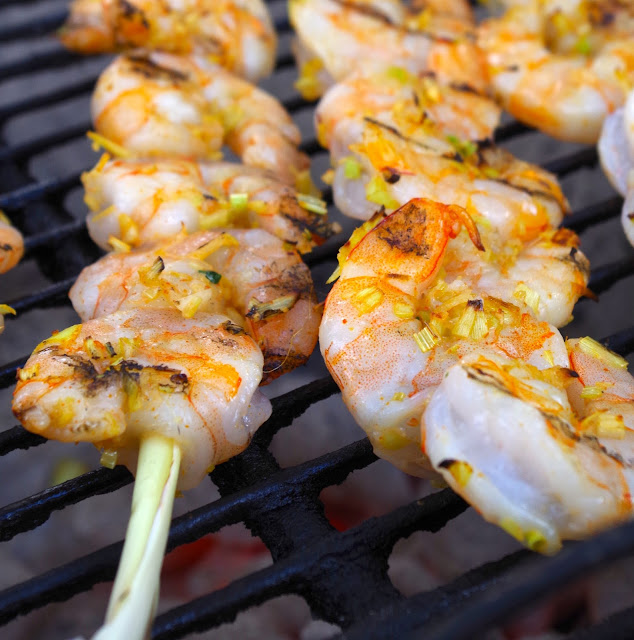 We have been trying to eat a little healthier, despite some of the most recent (and some upcoming) posts on this blog which would suggest I am living a life of lavender booze, hot toddies, and corn muffins.

With that in mind, it was delightful then to make this simple recipe for grilled shrimp. 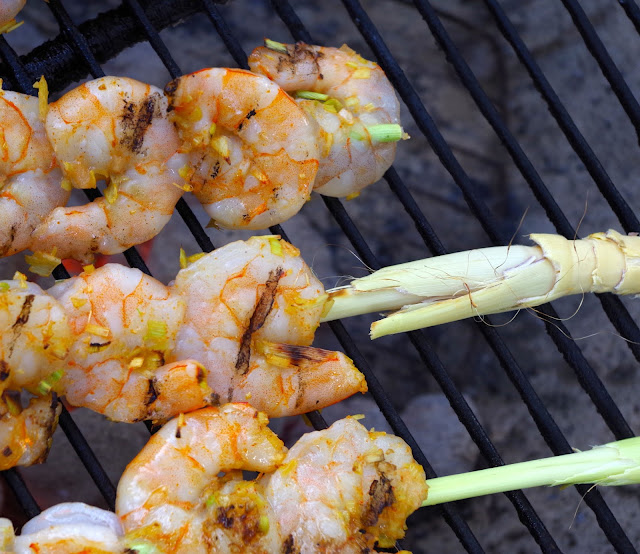 Mark Bittman, the engaging food writer for The New York Times, penned the lovely cookbook from which this recipe comes back in 2005 and the husband gifted this to me in 2010 for Christmas (the same year I gave him a different Mark Bittman cookbook as well). However, it turns out I have posted from the book here only once, despite the fact that I do turn to this cookbook often for generally quick and generally healthy world cuisine.

Indeed, Bittman's mantra is that food (its cooking, its systems) has the power to affect our personal as well as global health, and we would be best served to be thoughtful, healthy, and sustainable both on the farm and in the home.

Cue entrance for these lemongrass-skewered shrimp that work smashingly with a salad. 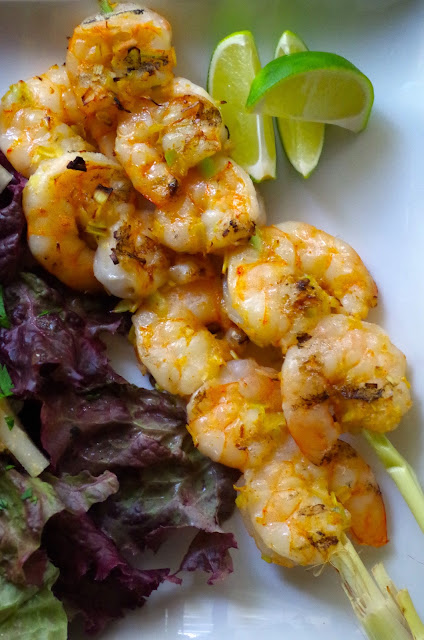 Lemongrass is an Asian, African, and Australian grass that has a high lemon-y smell. I find the smell almost artificial, like lemon-scented products (although, once cooked, the grass has a mild citrusy fragrance). Pared down, it can make a nice little skewer for the shrimp; however, if you don't have lemongrass at your local grocery store, a regular skewer will do.

The shrimp takes on a slightly lemony flavor from the inside out because of the grass skewer, but adding a squeeze of lemon juice before serving would bring a brighter and even more pungent lemony flavor on the surface. This would not be a bad thing, no. So don't despair should you find a dearth of lemongrass in your area. 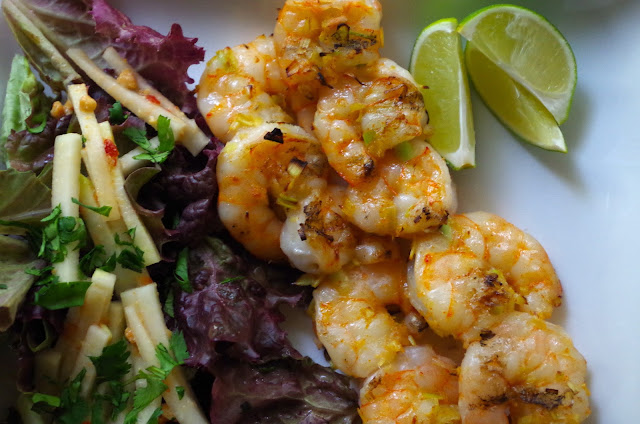 Beyond its skewering capabilities, lemongrass is the go-to herb for many holistic health practitioners, some of whom claim analgesic, antidepressant, deodorant, digestive, and diuretic effects. That seems like a lot of pressure on grass, so I leave that to the scientist in you to determine the health properties of this blade of lemony goodness.

Instead, I will continue to just use it in my cooking and delight in that alone. 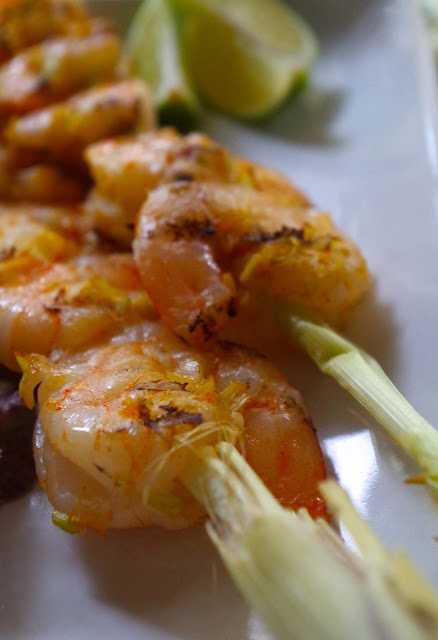 Finally, Bittman suggested a few additions to the shrimp skewers in order to round this dish out into a meal, including nam prik dipping sauce, a lemongrass tea, and sliced pineapple. We also added a salad.

Nam prik is a basic, slightly sweet Thai sauce used as dressing for noodles, vegetables, and meat and as a dipping sauce for everything else. You can make it as tame or as mild as you would like: just keep adding chiles. I made mine tame, I'll admit it.

To make lemongrass tea, take all the trimmings from the skewers of lemongrass, chop them up, add them to 4 cups of water and 1/4 cup of sugar, heat on the stove for 10 minutes, strain and chill.

As for the pineapple, well that was an utter disappointment since the pineapple we bought had absolutely no flavor.  Thankfully, an old article from The New York Times gently reminds us that choosing a ripe pineapple is often risky business. It never even saw the plate.

However, we did make a side salad with kohlrabi that had been marinated in fish sauce, chile sauce, lime juice, and some peanut butter (I know, kohlrabi is not a Thai food, but our CSA keeps sending us kohlrabi, and I am trying to come up with 56 creative ways to use it).

And thusly, we settled in for a dinner to watch the Warriors (I am not an NBA fan, but I do have some hometown pride--how about that game last night, huh?) and ate healthy food. At least for now. 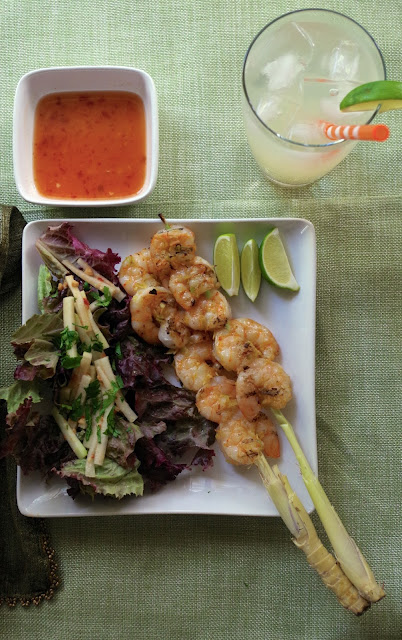 Adapted from  Mark Bittman's The Best Recipes in the World

Instructions:
1.  Trim the tough ends and exterior sheaths from the lemongrass until you have a thin but sturdy inner layer of stalk. You need to be able to skewer the shrimp with the remaining stalk.

2.  Roughly chop the trimmings and toss them with the shrimp, salt, pepper, cayenne, garlic, oil, and nam pla. Let rest while you preheat the grill or broiler; the fire should be quite hot and the heat source roughly 4 inches from the rack.

3.  Remove the shrimp from the marinade and skewer them on the stalks. Grill the shrimp until firm and pink, 2-3 minutes per side. Garnish with cilantro, then serve hot with the dipping sauce and lime wedges.

Instructions:
1.  Combine all the ingredients and stir to dissolve the sugar. Taste and adjust the seasonings.
Garlic Ginger Lemongrass Shrimp The Best Recipes in the World