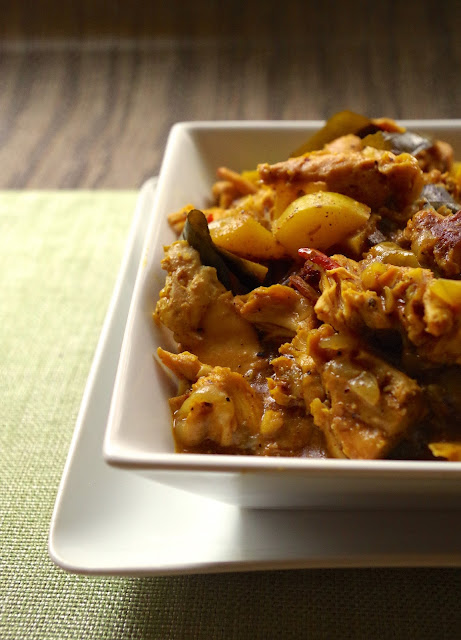 This is not your basic British mulligatawny, which often arrives in soup form, often with lamb instead of chicken, often thin and easy to slurp with a spoon. Instead, this mulligatawny arrives as a curried stew, all thick and oily and so wildly wonderful that you’re a little disappointed that you didn’t make more than six servings (which really, given the amount you put on your plate when you came back for seconds, means four servings). 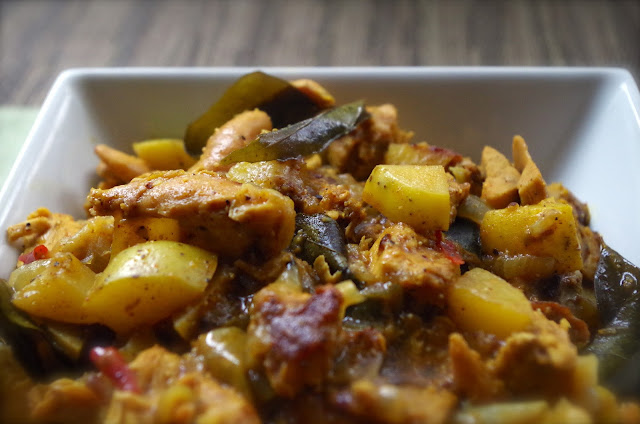 Oh, the Brits do wild things with their mulligatawny, adding nutmeg, apples, nuts, and sometimes even port wine (!?). However, this is your basic mulligatawny sauce rather than soup recipe and is far more reminiscent of the Indian rather than the Anglo-Indian dish, which is precisely how it is served at Ajanta, Berkeley's fabulous Indian restaurant perched atop Solano Ave. 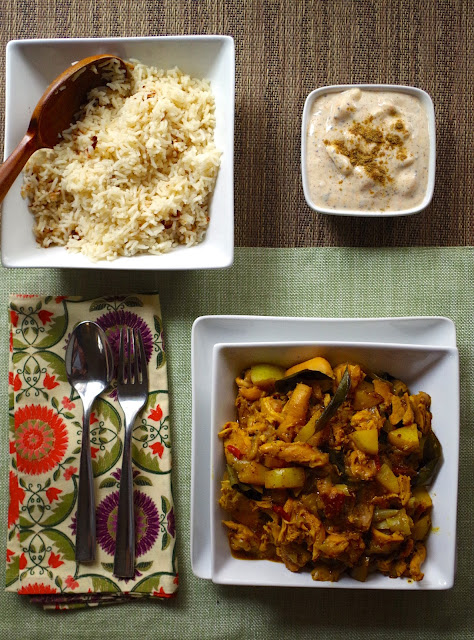 According to Moorjani's headnote the word mulligatawny comes from a Tamil word (mulligat) which means peppercorns and another (thani) which means soup. Many an 18th-century British soldier in the East India Company enjoyed a thinned-out version of a the mulligatawny stew as part of a soup course (which was akin to a British and absent from an Indian tradition). Those Brit soldiers brought this invented soup back home and then had a heyday in changing the recipe up to suit their own tastes. That said, it's hard to say what the original recipes for the mulligatawny stew or curry really called for, and so a little play is actually encouraged in the kitchen with this recipe. Further, it's a great way to use up abundant potatoes from the CSA box, and lord knows, I am always looking for ways to do that. 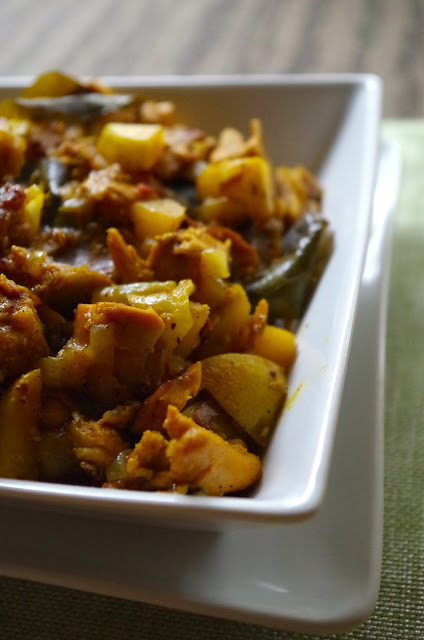 I have loved this recipe for years. Back in 2007, I made a family cookbook using the resources at tastebook.com. I stuffed a self-created book full of our favorite recipes and some of my favorite pictures, and then I distributed copies amongst the in-laws as part of a cooking-themed Christmas present (I love a good theme). Before each recipe, I gave header notes and I modified the recipes to reflect our palates rather than those of the recipe writers. (Clearly, I was a blogger in the making!)

This recipe was featured, of course, next to many of our favorite family dinners (some of which I have written about here) including Cioppino, Pound Cake, Sorensen's classic Beef Burgandy Stew, and Royal Chicken. When I reminded the husband that I used to make this dish all the time, he claimed no knowledge of it. Clearly, he was sorely mistaken, for this page was one of the most food stained of them all. 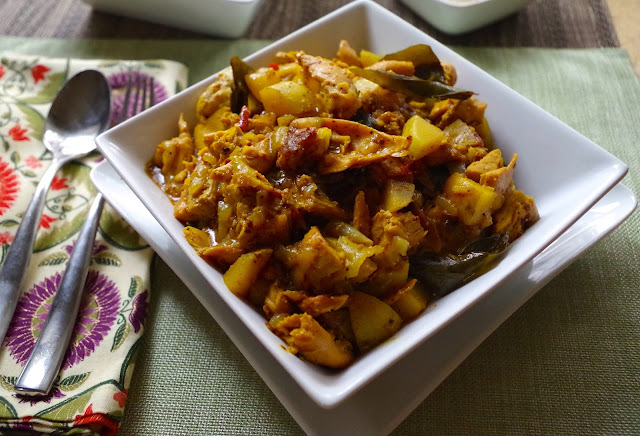 However, once I made the dish again, after what has probably been a solid yet sad five years, he was reminded of just how good it really is. And the first thing he remembered is just how hot Lachu Moorjani, our cookbook's author and owner of Ajanta, likes to make his dishes. Which we enjoy--but definitely, be forewarned.

In fact, the most important part of this recipe is heat and heat control. Moorjani calls for 3 dried red chile peppers in the onions and then an additional 1/2 to 2 teaspoons of hot chile powder in the spice mixture. If you’re using relatively fresh dried chile peppers, err on the side of caution. Use only 1 chile and keep the powder down to 1/2 teaspoon to 1 teaspoon. If you use more, be sure to have plenty of raita on hand (which, this time, we did in the form of that fantastic kela raita I wrote about here). And maybe some kleenex. 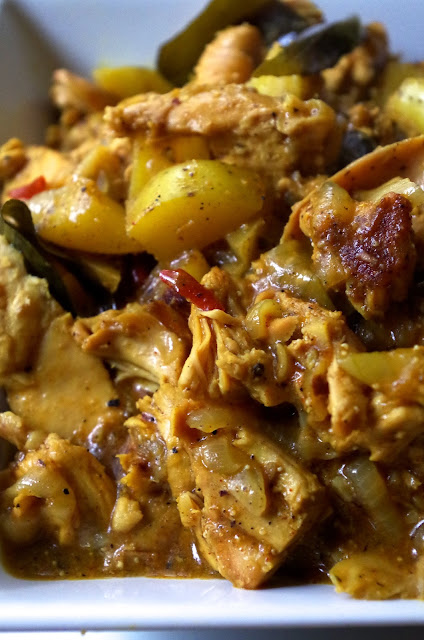 So, put your spoons down and pick your forks up, for this mulligatawny requires more chewing than slurping. However, I promise, it just might make it into your rotation of delicious dishes this year. Lord knows, it's making its way back into mine. 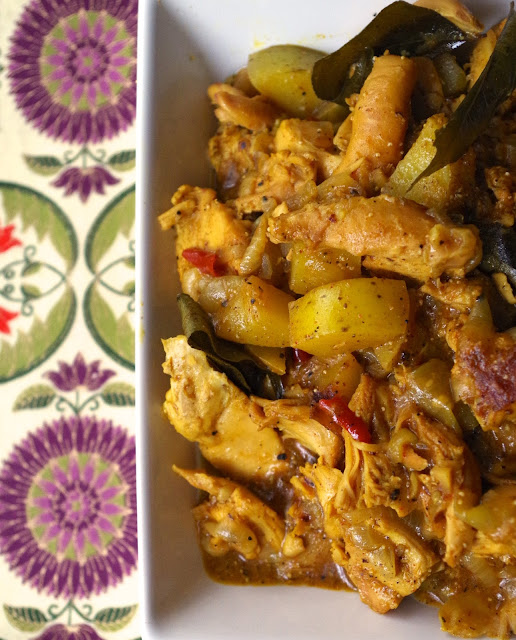 The list of ingredients seems long, but it is mostly spices. So don't be dismayed.

2.  Add onions and saute over medium-high heat, stirring every 2-3 minutes, until fully translucent and slightly brown, about 10-20 minutes.

3.  Turn to high heat.  When the pan is hot, add chicken and stir until all the chicken pieces are nicely browned and most of the moisture has evaporated.

4.  Add cubed potatoes and all of the remaining spices and salt (coriander powder through cumin powder); cook for 3-4 minutes.  Add coconut milk and bring the mixture to a boil.  Reduce heat and add curry leaves (if using), then cover and simmer for 20 minutes, or until the chicken is tender.  Mix in lime juice and Garam Masala.


**Garam Masala is a mixture of 1 tablespoon whole cardamom, 1 tablespoon cloves, one 2-3 inch stick cinnamon, 1 tablespoon peppercorns, and a few blades of mace all toasted and ground with the addition of a few shavings of nutmeg.  Or you can buy some of this traditional spice mixture--but everyone's recipe is different.