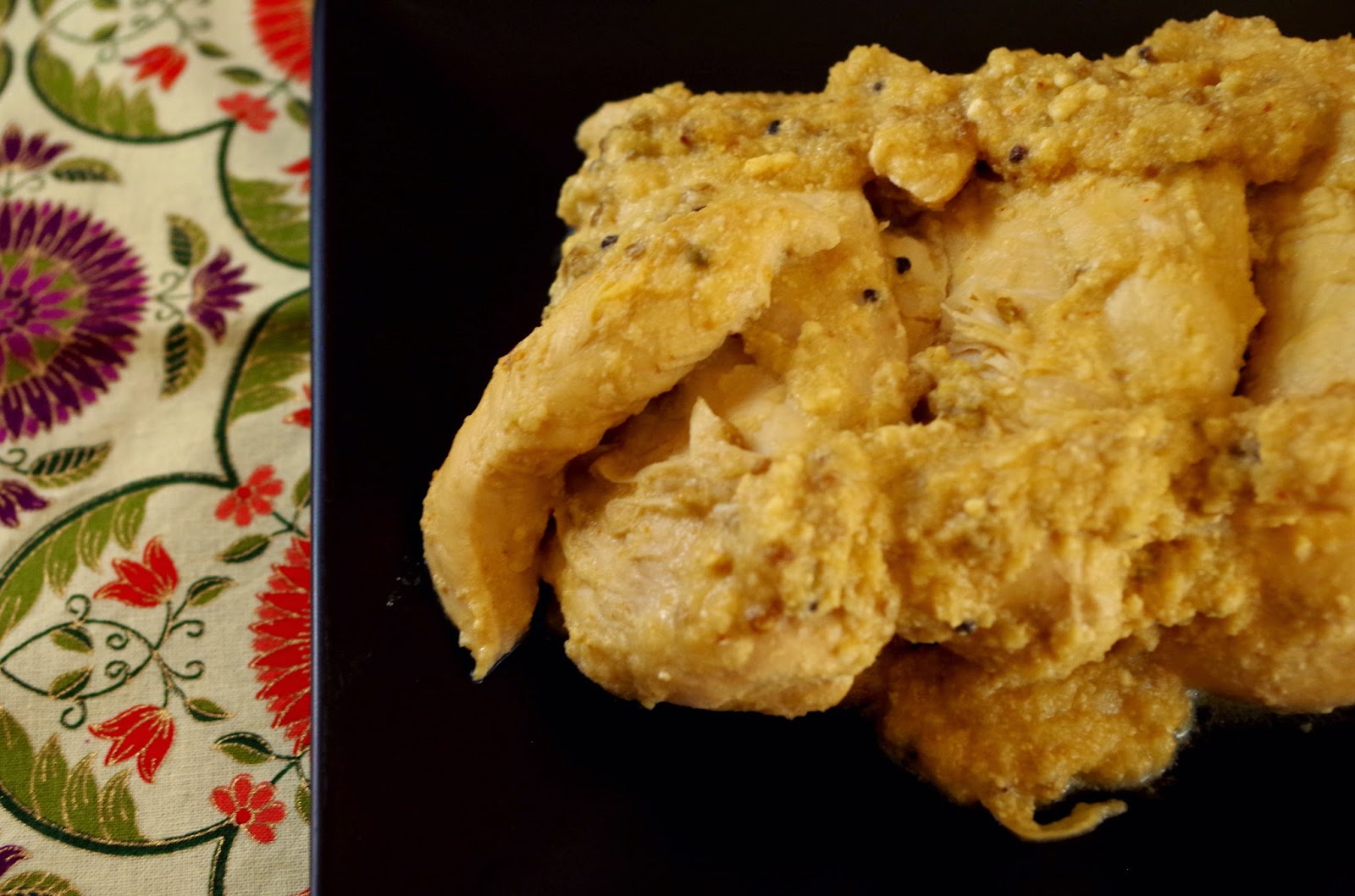 When we first moved to the Bay Area about 13 years ago, the husband and I lived with the in-laws. There, I learned how to cook for more than just myself and the occasional impromptu party. Certainly, I was well versed in how to make all the things I liked--eggplant Parmesan, veggie burgers, salsa--and I knew how to get excited, make three lasagnas, realize I couldn't possibly eat that much, and invite a dozen friends over. What I didn't know how to do was cook on a daily basis for someone other than myself. Further, a recent conversion back to the eating of meat left me with no idea how to cook anything that was once clucked, bleated, or mooed. Thus, the nightly dinner with the in-laws spurred me into learning how to cook. With rotating dinner-making duties, we all gathered in the kitchen, talking, sipping wine, and tossing together a simple salad. 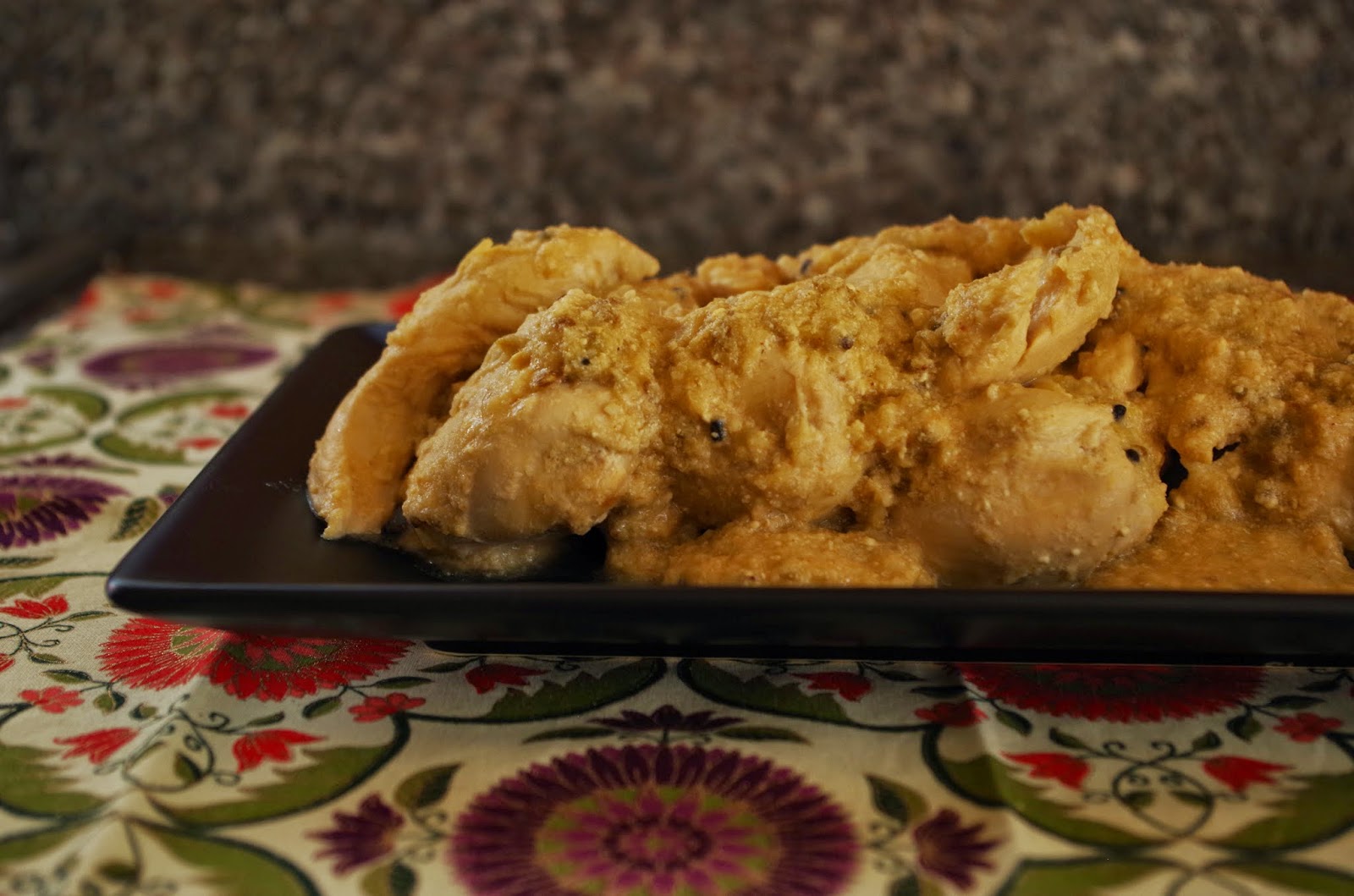 Somewhere in that time, the mother-in-law began cooking from Julie Sahni's Classic Indian Cooking, a cookbook I have waxed on about here.  Saffron and peach pilaf became a late summertime luxury and she started moving Indian cooking out of our kitchen: favorites such as Saag Gosht began showing up on camping trips. However, what she made most often in that spacious kitchen back in the East Bay hills was this unctuous and satisfying Moghul dish--what we affectionately came to call Almond Chicken.

She has perfected her dish over the years, using ground spices rather than whole for convenience and often making huge batches of the dish so that she can freeze a good two-thirds of it for easy weeknight meals (and indeed, this is yet another of those dishes that is so much better the next day, making it an ideal dinner party dish). Thus I was as delighted as can be to have this dish fall on page 215. Not only did this mean I would get to wax on about cooking with my in-laws over a decade ago, but it meant I got to have one of my favorite Indian meals. 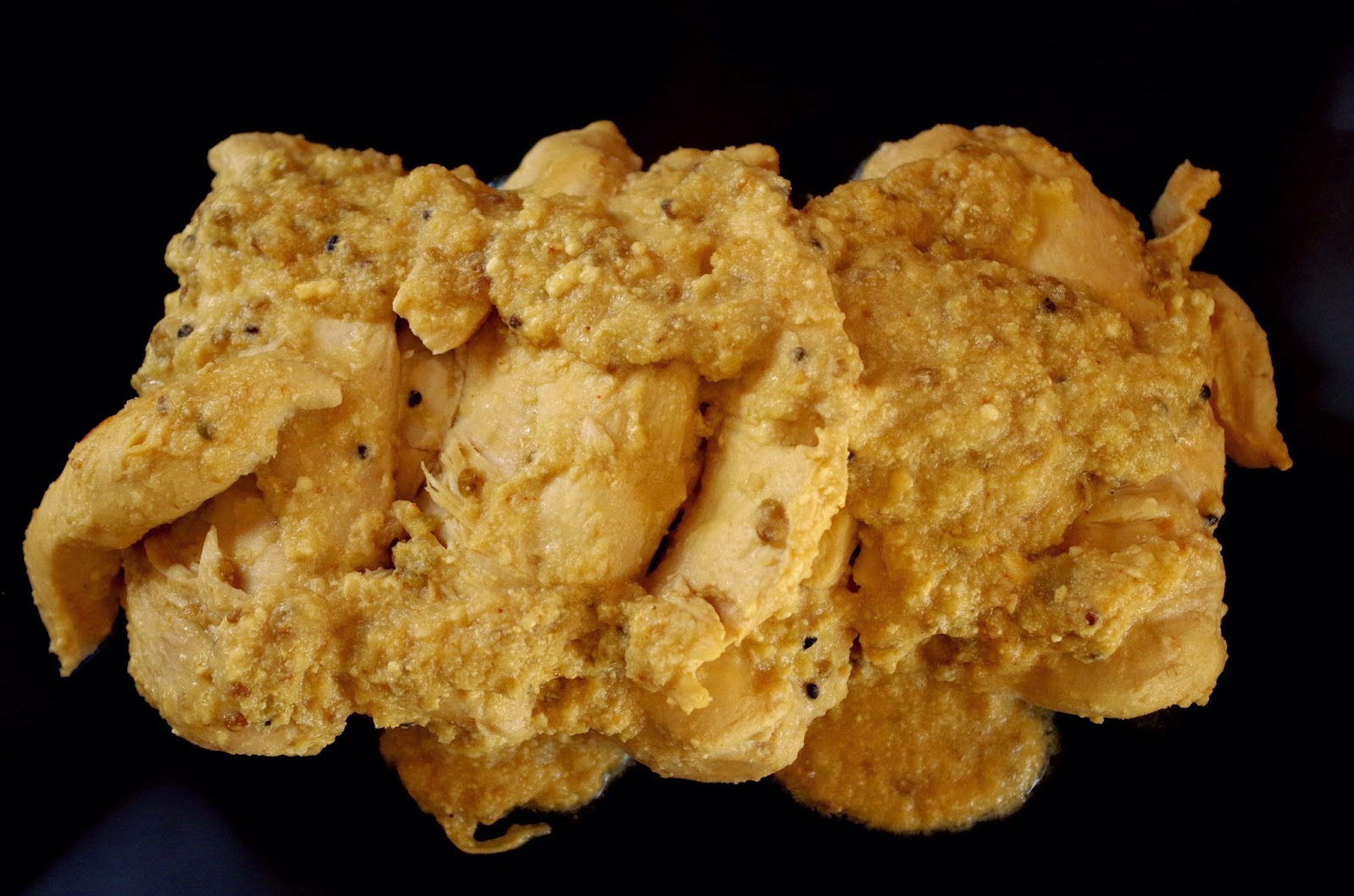 This dish comes from the Mughal Empire, where imperial cooks fused Persian and Indian spices, techniques, and ingredients to create dishes aimed to please shahs. Characterized often by dairy (yogurt, cream, cheese), dried fruits and nuts (almonds, pistachios, raisins), and spices (cardamom, cinnamon, cloves, saffron), these rich dishes have become some of the most beloved in India and across the world. This dish is no exception to the richness, the subtle spiciness, and the sheer luxury that Mughlai cuisine promises. Be forewarned, the recipe says "Silky" White Almond Sauce, which refers to the appearance of the sauce. Don't be fooled. The texture is a bit grainy (especially with the ground almonds and whole spices). However, it lives up to its imperial roots--this is, indeed, a dish fit for a shah. 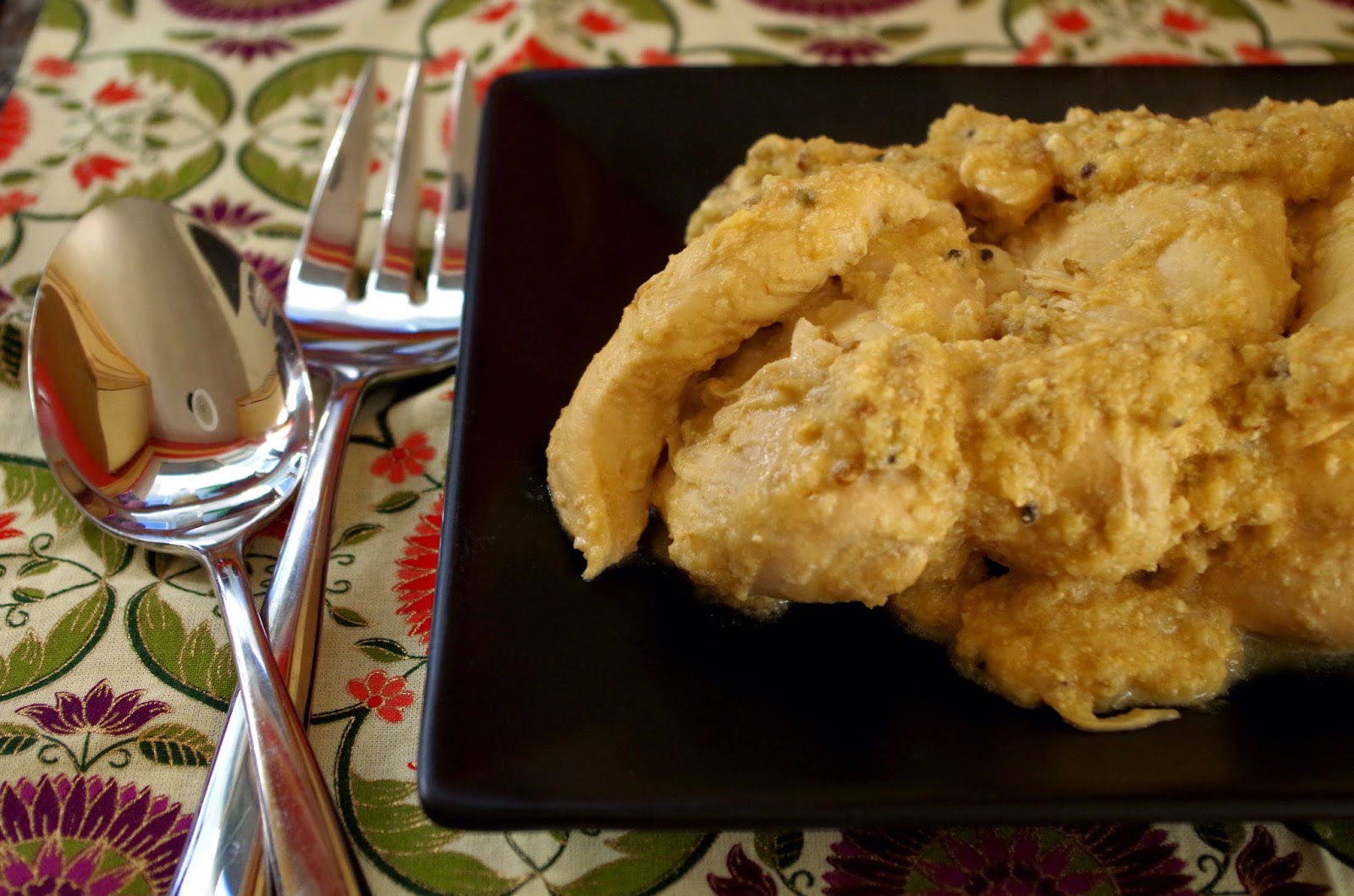 I used whole spices (as called for by Julie Sahni but not the mother-in-law) and I cut down a bit on the fat (as called for by the mother-in-law but not Julie Sahni). My changes are already reflected in the recipe below, but if I have learned anything from those dinners cooked in that lovely kitchen in the Richmond hills, the art of cooking really is in the experimentation. Of course, that experimentation sometimes led to dinners unceremoniously slid into the garbage and all of us heading to Chevy's. (Don't worry; I won't judge.) However, I promise you, this will not be one of them.


*I used 2.5 pounds of boneless, skinless chicken breasts.
**Full-fat or non-fat, both are fine. The full-fat yogurt will be heavier and creamier. However, the non-fat will be light and still satisfying.

Instructions:
1.  Cut off the wing tips and pull skin away from all of the chicken pieces.  (You can save the skin and wingtips for a future stock).  Or, you can skip this step altogether if you have skinless chicken pieces at the ready.

2.  Heat 2 tablespoons of the oil over medium heat in a wide, heavy-bottomed pan.  When the oils is hot, add the chicken pieces, a few at a time, and cook, turning constantly, until they loose their pink color and begin to sear.  Do not allow them to brown or the sauce will turn dark.  Take them out with a slotted spoon and reserve them in a bowl.  Continue with the rest of the chicken pieces until all are seared and set aside.

3.  Add the remaining 3 tablespoons of oil to the pan, along with the onions.  Saute the onions until they are wilted and pale golden (about 30-40 minutes), stirring constantly to keep them from cooking unevenly.  (This process always takes longer than I imagine, so go slow, stir constantly, sip wine.)

4.  Add almonds, coriander, and cardamom, and cook for an additional 3-5 minutes or until the almonds are lightly colored and the cardamom pods are puffed up.  Add cayenne and stir.  Turn off the heat.

4.  Put the onion, nut and spice mixture, along with 1 cup water, in a blender or food processor (be careful to let the mixture cool down enough so that the lid doesn't go flying and you burn yourself with the mixture).  Mix until a fine, smooth puree.

5.  Return the puree to the pan almond with the chicken pieces, yogurt, and salt, and bring to a boil.  Reduce heat and simmer, covered, until the chicken is melting tender and the sauce has thickened (about 45 minutes).  Turn off the heat and let the dish rest, covered, for 1/2 hour before serving.  When ready to serve, reheat the dish until piping hot, check for salt, and serve.


Note: This dish is even better if you make it a day ahead.  It can be kept in the refrigerator for up to 2 days or frozen.