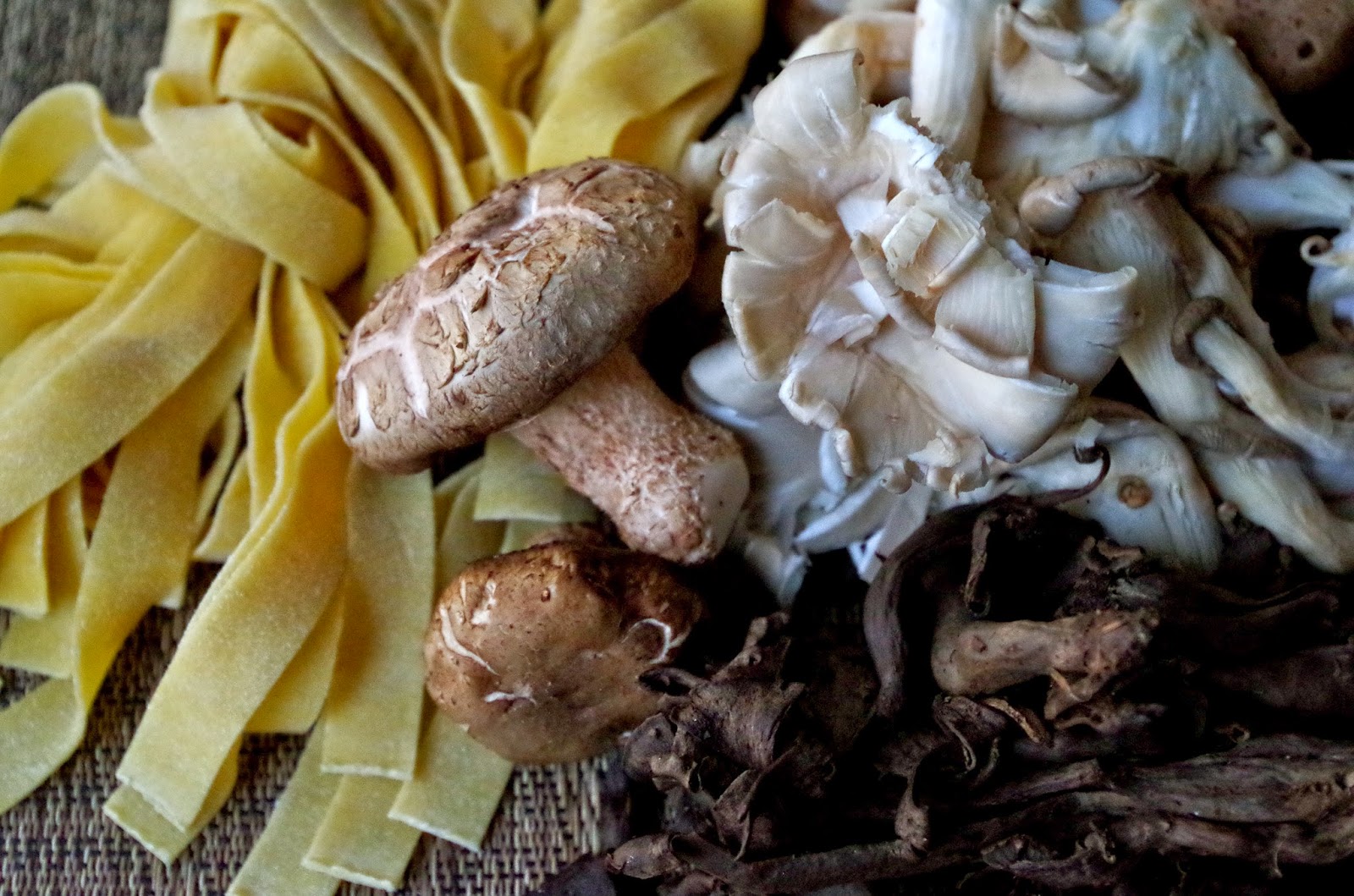 I could move to Seattle.

Since moving to California, I have learned the following lesson again and again: I love the water. I love the crash of waves while I walk on the beach with a cup of hot chocolate, the splash of sidewalk puddles (especially when I am wearing my polka-dotted rain boots), the penumbras of light from streetlights in heavy fog, the ping of rain on the roof of my car, the rush of fog over the Berkeley and Oakland hills, the sweep of the Bay as I round the curve on 24 just heading west from the Caldecott Tunnel, and most recently the stillness of the surrounding Delta while hundreds of ducks dip beneath the water's surface for food.

However, we just ended the driest January on record here in the Bay Area. As in, literally no rain whatsoever during the wet season: the first time since 1850 that no rain has fallen in January. Yikes.

I miss the rain. 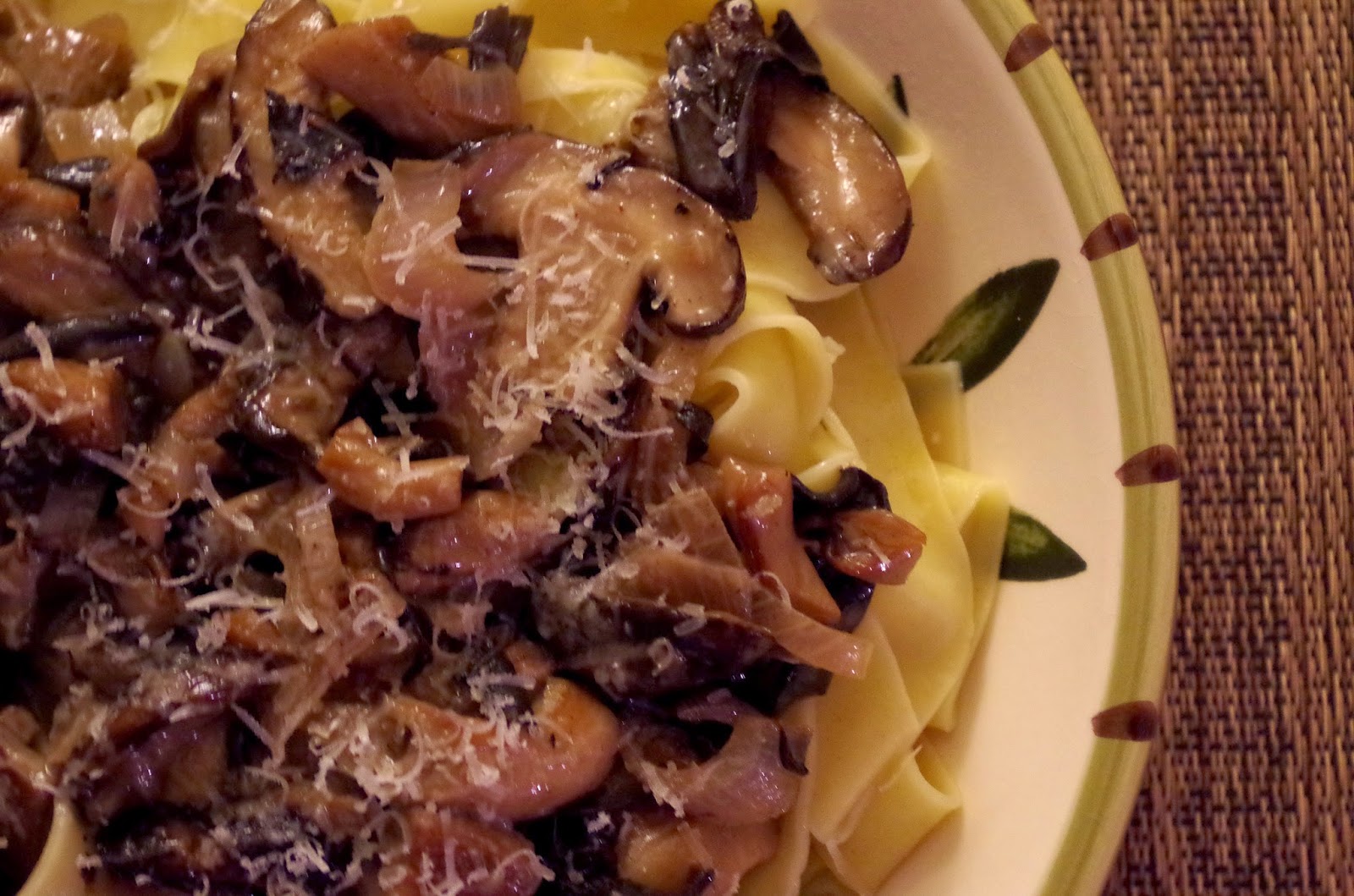 And I miss the mushrooms that come with the rain.

The other day, I had planned to make this recipe from Thomas Keller's Ad Hoc cookbook, but when my most fantastic running buddy and I walked (because, lordy, we were not in the mood to run that night) to the little local grocery store so I could get supplies, there was nary a wild mushroom to be found. Thus, I had to scrap those plans (I made this potato salad instead because I could find smoked trout) and scheduled a trip to the Berkeley Bowl, where one can find anything one needs, including wild mushrooms trucked in from Californian land north of here, where rain still seems to be a lead actor in the local climate. 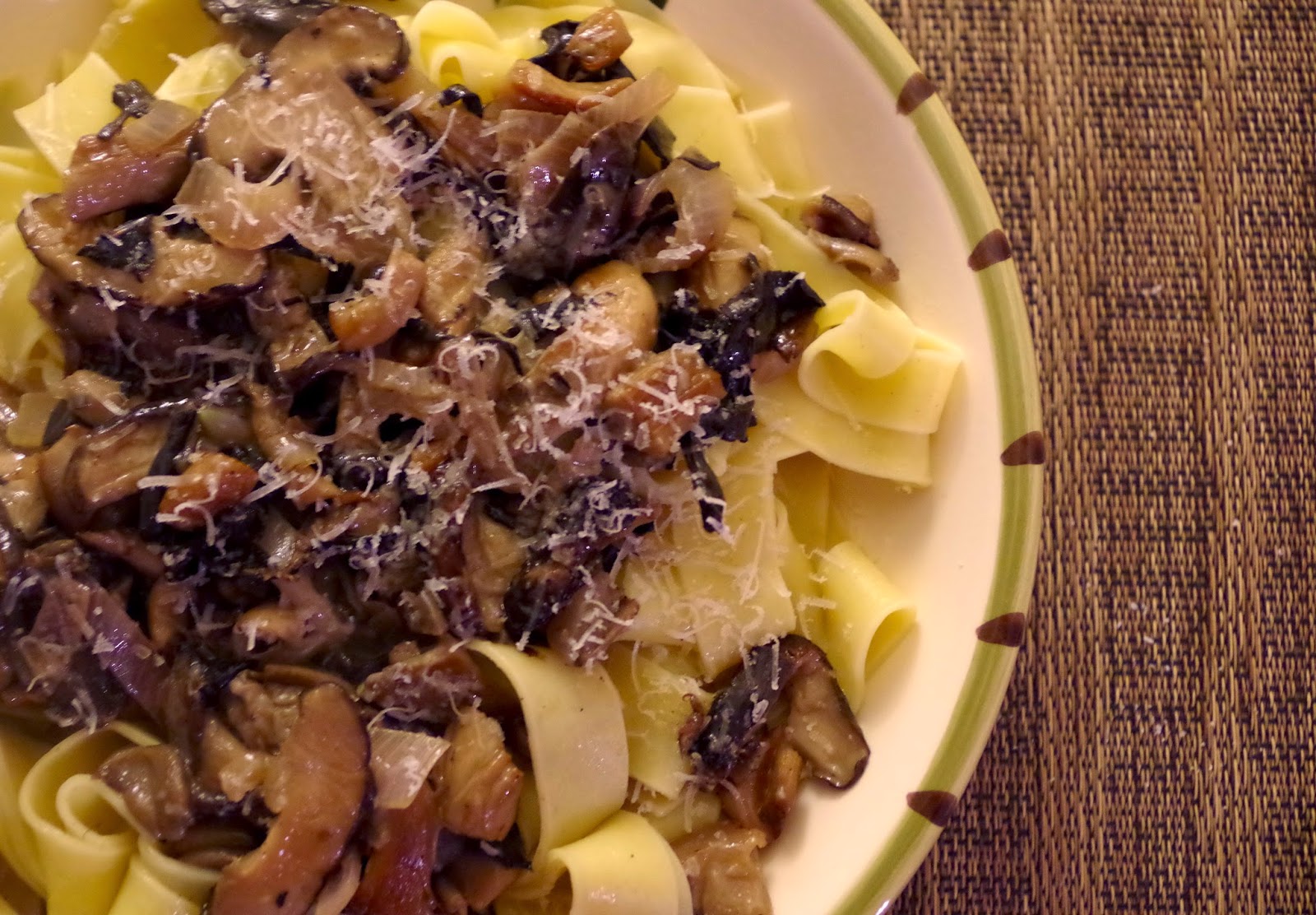 My love of the mushroom--wild and domesticated--is well documented, including my pinnacle moment of driving a backhoe on a Pennsylvania mushroom farm and the husband's local chanterelle hunt five years ago with our mycologist friend (who had the audacity to up and leave us for Ohio to start his own farm).

Wild mushrooms are serious business, as in a deadly serious business. One has to be absolutely certain of what one is plucking off the sides of dead trees or selecting from beneath a cover of pine needles and decomposing twigs, or one has to go a-foraging with a local expert and a thorough field guide. I am not confident in the foraging abilities of the husband, so I like to rely on those professionals who supply the Bowl. Sure, it means that we pay more for dinner, but it also means we don't pay with our livers or our lives. 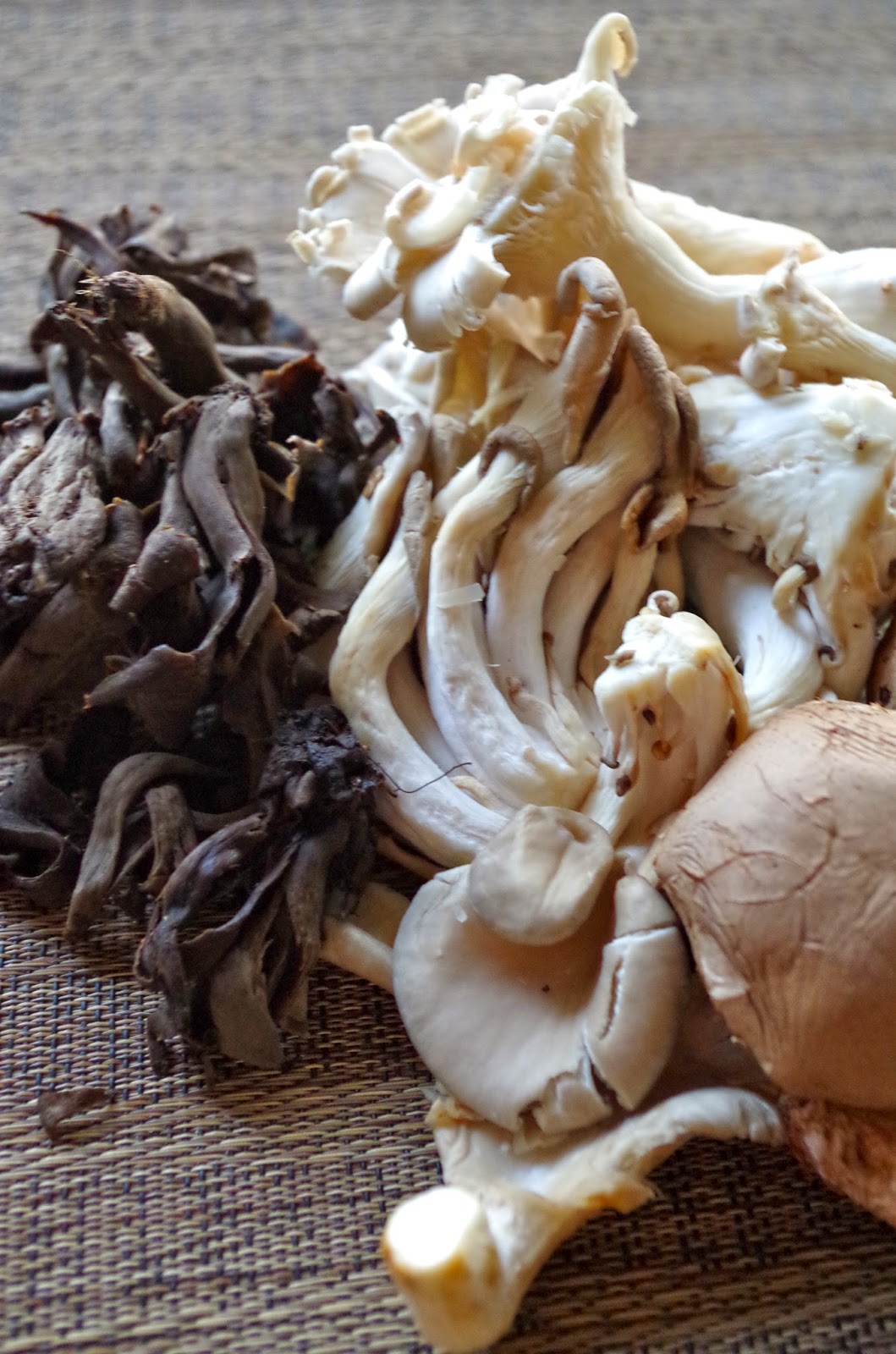 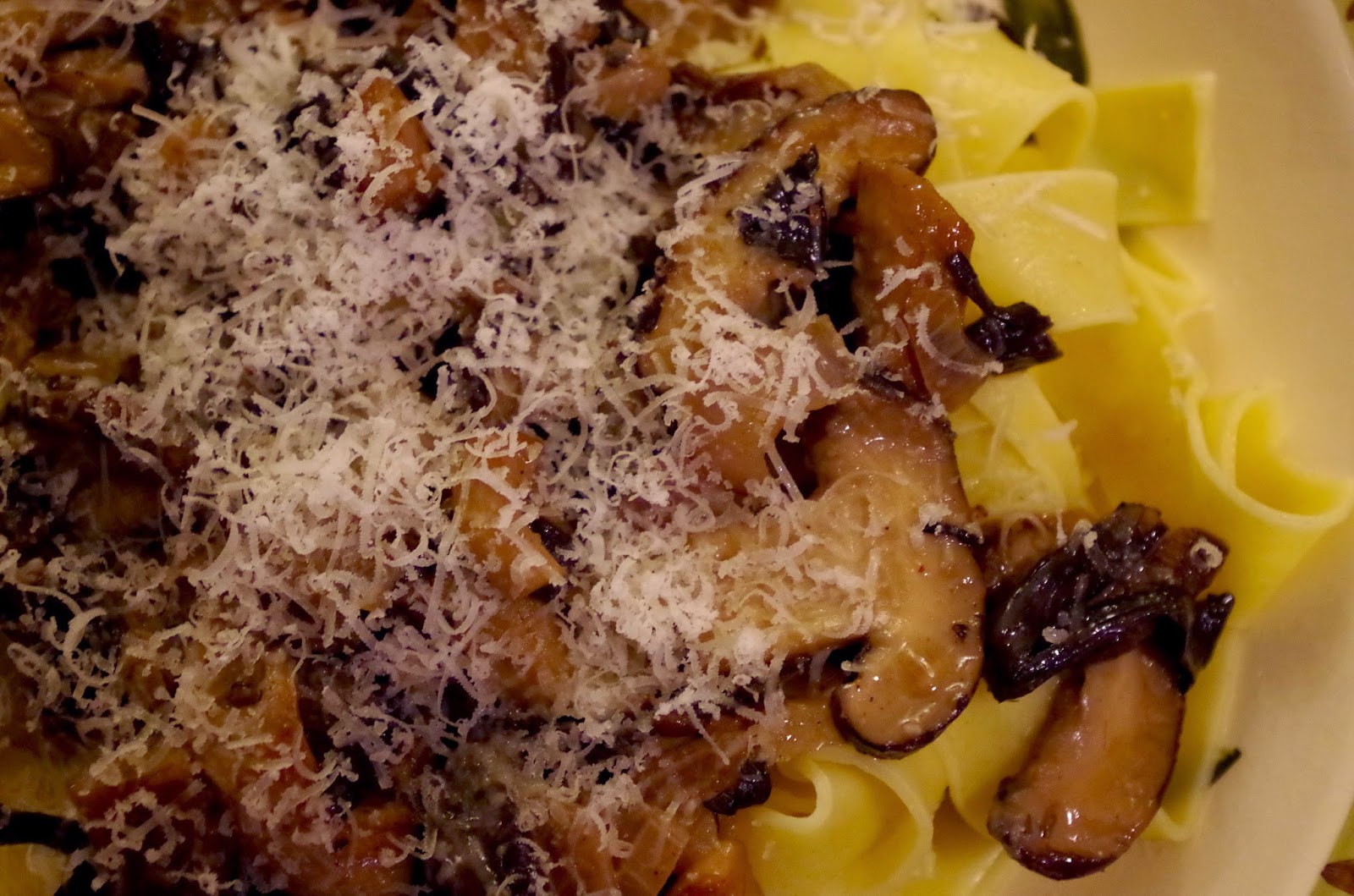 Thomas Keller's version of pasta with wild mushrooms comes from the cookbook that accompanies his fantastic restaurant Ad Hoc. A few years ago, a friend of mine declared upon visiting California that she wanted only two things: a trip to Napa and to his restaurant. I am so glad she did, for we have been back to the restaurant for many a celebration (including ordinary Saturdays), and we have not been disappointed. With curbside Superbowl menus of fried chicken and smoked chicken wings, brunch menus with chicken and waffles or chocolate chip pancakes, and dinner menus boasting an add-on of beef marrow or beer-braised mussels, this restaurant has a healthy dose of fun with its gourmet ingredients.

This pasta is rather unctuous and satiating in part because of the sheer abundance of butter (I might consider knocking off a half of a tablespoon here or there, but I left the amounts as is in the recipe. You make the call).  I did half the pasta, which I noted in the recipe--Keller calls for one pound.  I say use only a 1/2 a pound if you're serving this as a main dish. You will want the heartiness of all of the mushrooms. However, if you are serving this as a side dish, you might want to go with the whole pound of the pasta; then, the mushrooms would be more of a hint, especially if you're serving the pasta alongside something heavy itself, like beef. Finally, be liberal with your salt and pepper, as well as your Parmesan cheese.

Overall, I quite enjoyed this relatively easy pasta dish.  We had just enough leftovers for my lunch the next day, which felt decadent while I sat at my desk. 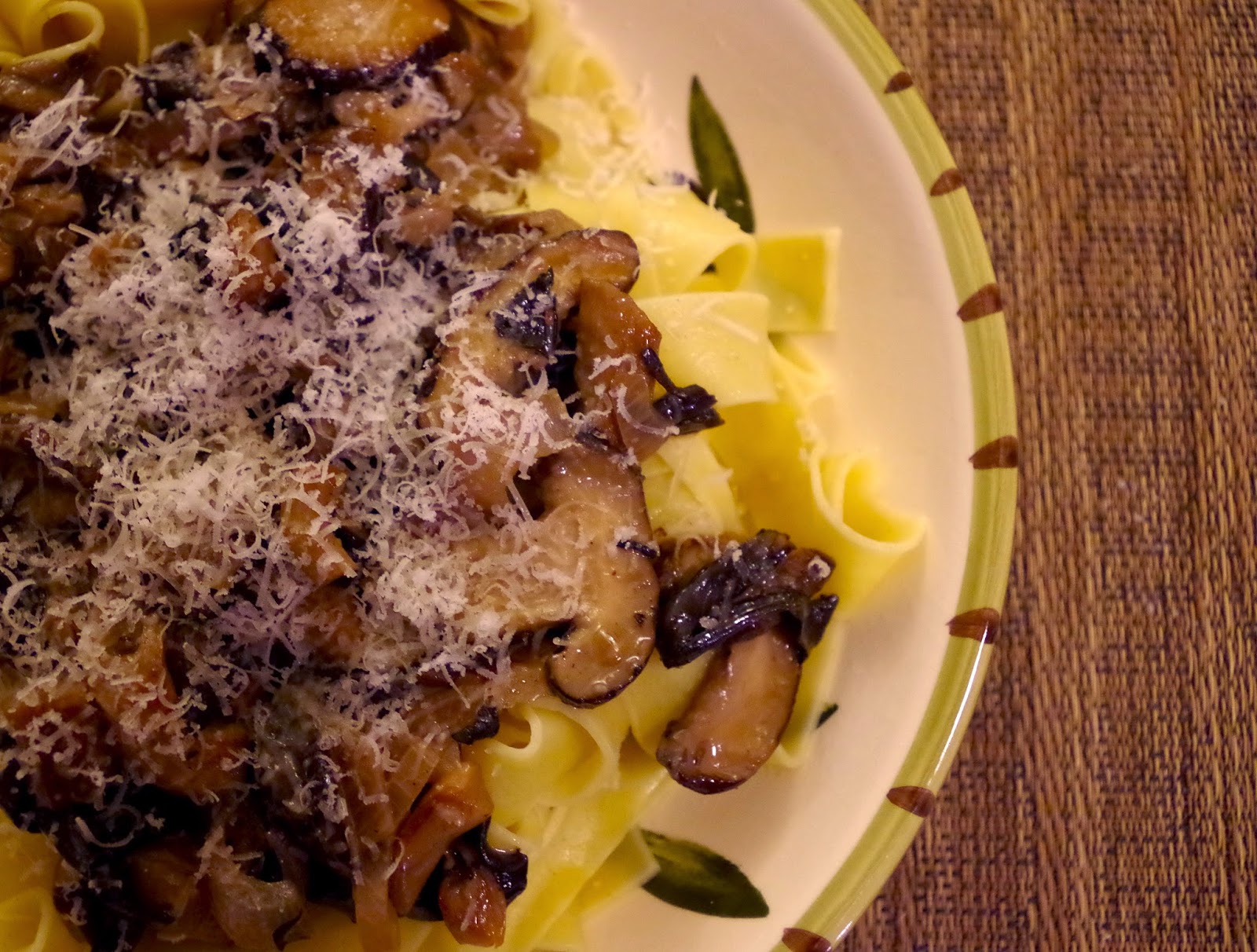 Now if only it would rain some more so that I can have wild mushrooms abundantly at my fingertips, or at least in my local market. I have already made one pasta with wild mushrooms dish, and I still have another pasta with wild mushroom dish that I must make from page 215 this year. While I would like to make that dish this winter (fingers crossed for the forecasted rain this weekend), I guess I can wait until fall and hope we'll get more rain then.

Either that, or I am going to have to move to Seattle.

Instructions:
1.  To prepare the mushrooms:  Remove any tough stems from the mushrooms, such as the stems of the shiitake mushrooms, and discard. Trim the ends of the other mushrooms and trim any bruised areas. Rinse the mushrooms as necessary to remove any dirt. Small mushrooms can be left whole: larger mushrooms should be cut into pieces or slices. The size and shape will vary according to the variety of mushroom.

3.  As the water is heating, heat a small amount of canola oil in a large saute pan over medium heat until hot but not smoking. Add only as many mushrooms will fit in a single layer in the pan and cook, without moving the mushrooms, to brown them, about 2 minutes. Cook for another 2 minutes, stirring occasionally. Season with salt and pepper and transfer to a bowl. Heat more oil and cook the remaining mushrooms.

4.  Return all the mushrooms to the saute pan and set over medium heat. Add the shallots and cook until the shallots are softened, 1-2 minutes. Add 1-2 tablespoons of the butter and cook until the mushrooms are glazed, about 2 minutes. Add the stock, bring to a simmer, and whisk in the remaining butter until emulsified. If the sauce begins to break or looks oily, add a small amount of water to re-emulsify it. Stir in the vinegar and pour the mushrooms into the warm bowl.

5.  To finish: Add half the pasta to the boiling water, separating any pieces that are stuck together. Do not overcrowd the pot, which would cause the pasta to cook unevenly. Cook until tender, 2-3 minutes.  Remove from the water (drain), and add to the bowl with the mushrooms, toss, then arrange in a serving bowl or on a platter.

6.  Top the pasta with any mushrooms remaining in the bowl and grate Parmesan to taste over the top. Serve additional cheese on the side.

*Note:  Keller gives instructions on how to make fresh pappardelle, which is clearly the superior way to go; however, we have a fresh pasta supplier literally 6 blocks from our house, so that's what we use.  In a pinch, you can use dried pasta (about 1 pound), which will not be as tasty but it will be quicker and perhaps easier to procure.  Plus, the sauce is really the standout here, so let's not worry too much about the pasta here.
at 7:59:00 AM