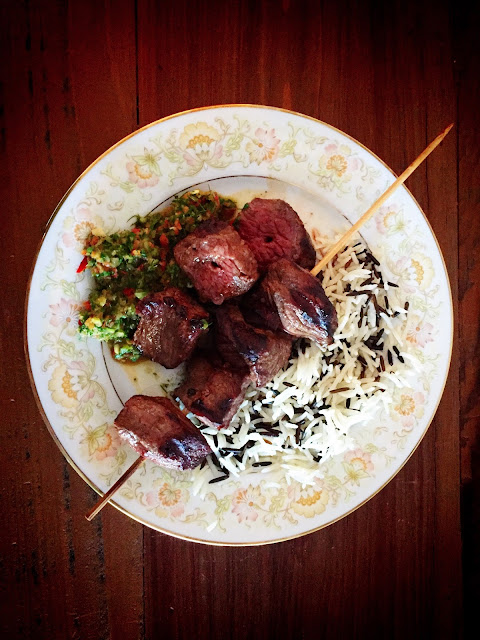 Is it too hot to cook inside? It sure was this Sunday in the Bay Area. Smoking hot. Of course, there are two answers to hot weather: grilling and gazpacho. We did both. (Gazpacho found here to come later, I promise.) 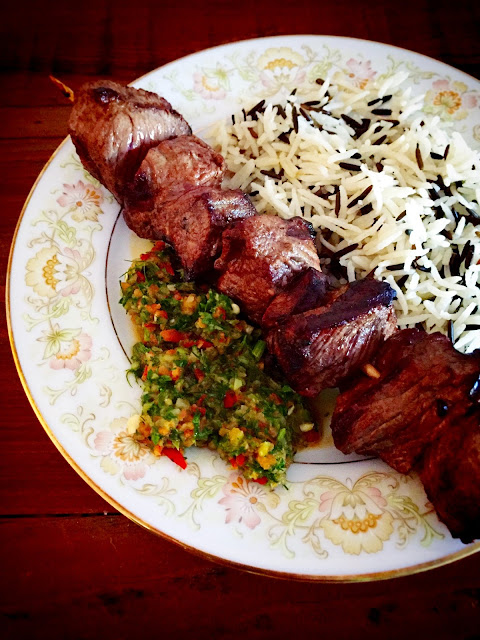 This little lamb skewer comes from none other than my favorite person, Diana Henry--this time from her cookbook, A Change of Appetite. (Want to read a great review of this book?  See here.  While Alex Guarnaschelli says she loves the book, she finds that it's culinary whirlwind tour a little discombobulating and she's not sure what she would turn to this book for. I do. I turn to it whenever I want something light and fresh and filling without weighing me down. And that happens throughout the year--be it on a hot summer day or after enjoying too many holiday treats come January. I know exactly why I come to this particular Diana Henry book.) 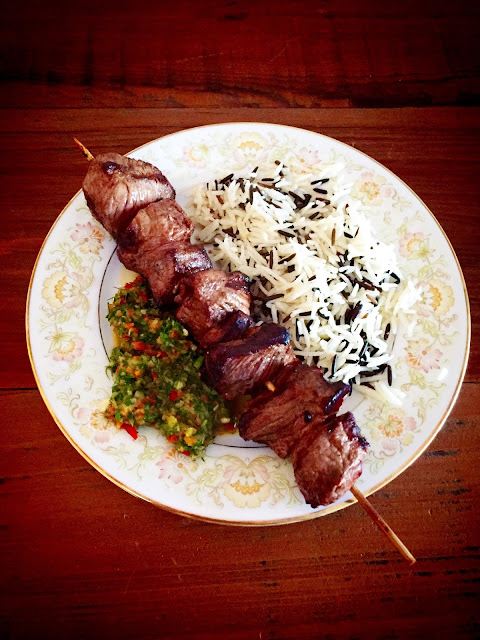 So the husband fired up the grill and made some lamb, which was simple enough. Shockingly simple, indeed. And I hoisted out the blender to mix up this Adzhika relish/salsa from Georgia (the country, not the state) on the side. My only regret is that I did not make even more of this sauce. While this recipe made plenty, and we had a good deal of it leftover, I found myself mixing it in with everything over the next few days. Tuna and bean salad? Okay. Yogurt with tomatoes? Sounds fine to me. Should we grill up some more meat? I'd top that too, but it appears I have eaten all of the Adzhika and need to make more.

Want to learn a little more?  Here are two links, one describing it as a salsa and another as a hot pepper relish. Is it no surprise then that I love it? A sauce? To go on morsels? Hush, say no more. 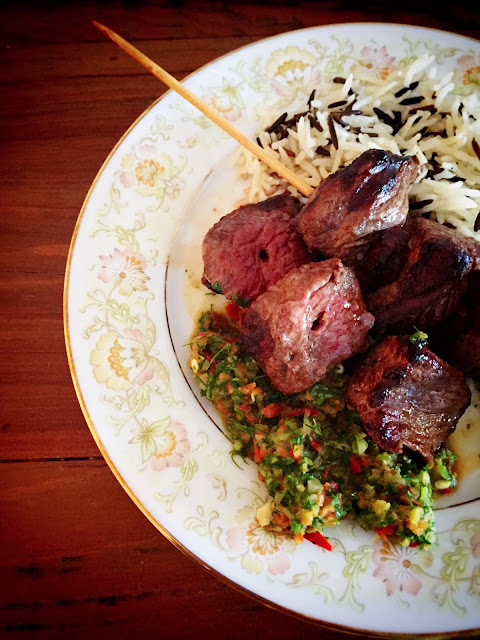 Adzhika is hot--or as hot as you want to make it, given you get to control how much of the chile you put in. But it is complex. The dill and cinnamon and celery are unexpected, at least for this palate, but the heat of the chile next to the cilantro brings me right back home to a more familiar salsa. However, upon some searching, this may be much more Adzhika "inspired" than Adzhika replication. Some adzhikas have no celery or cilantro and some purists claim that they should be only chiles, salt, and very specific herbs (coriander, dill, blue fenugreek, garlic). I guess I need to get on a search for true adzhika.

In the meantime, I definitely am going to layer this sauce on the gaminess of lamb for a big, bold flavor. Perfect for a hot summer afternoon with a side of rice to help cool your mouth after this palate cleanser. I am so on board with this salsa. At least until I can find some true adzhika.

And I suspect I would be on board with that, too. 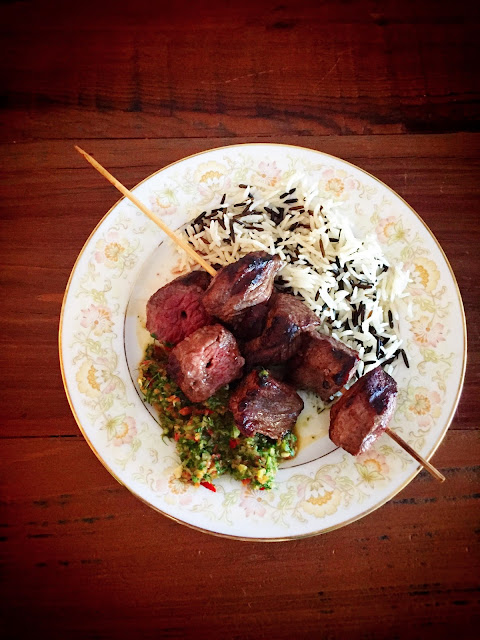 Adapted from Diana Henry's A Change of Appetite

1. Trim the lamb of any fat or sinew. Mix the olive oil through the 2 garlic cloves, crushed, together in a bowl. Put the lamb in the spice mixture. Turn the meat over in the marinade, cover with plastic warp, and put in the refrigerator to marinate for 2-24 hours. Turn the meat over every so often. Soak six bamboo skewers in water for at least 30 minutes.

2.  To make the adzhika, put the garlic in a food processor and blend. Add the celery, chiles, and bell pepper and pulse-blend to a salsa-like mixture. Add the herbs and pulse about 3 times. You don't want a puree--just a rough mix. Scrape into a bowl, add salt, vinegar and olive oil.

3.  Thread the lamb cubes onto the skewers and season with salt. Cook on a grill pan or a grill, until golden brown, turning them regularly. Keep these a bit rare in the middle, so these need about 7 minutes total. Serve with the adzhika. (We clearly also added some rice and wild rice--see pictures.)