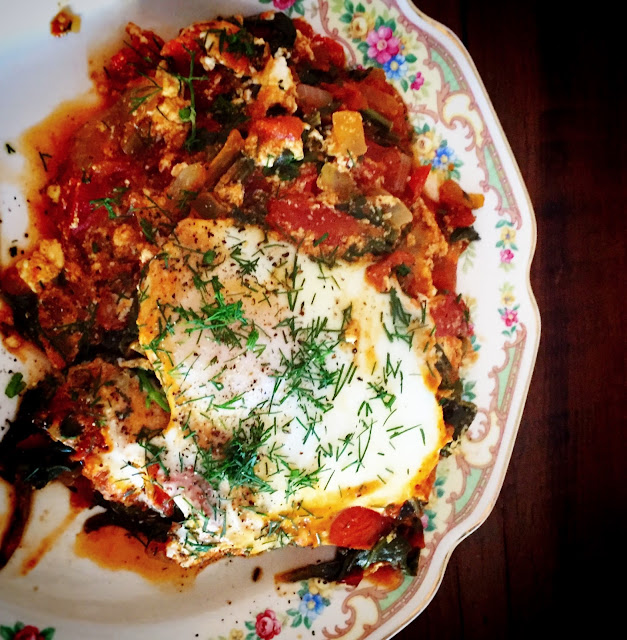 Life has been complicated as of late.

From switching jobs again to moving homes, from having our new home burglarized (man, oh man!) to a quick visit back to Illinois, my personal world has been somewhat hectic. (The burglary was scary, but everyone's okay, including the cats. And we're still in the annoyance of figuring out insurance. No one was home and the damage was, all things considered, minimal.)

I could say something pat that this is an uncomplicated dish in response to a complicated world, but I think this dish is a little more nuanced than that as were the experiences of the past three months. But one still needs good food even when trying to figure out insurance itemizations. 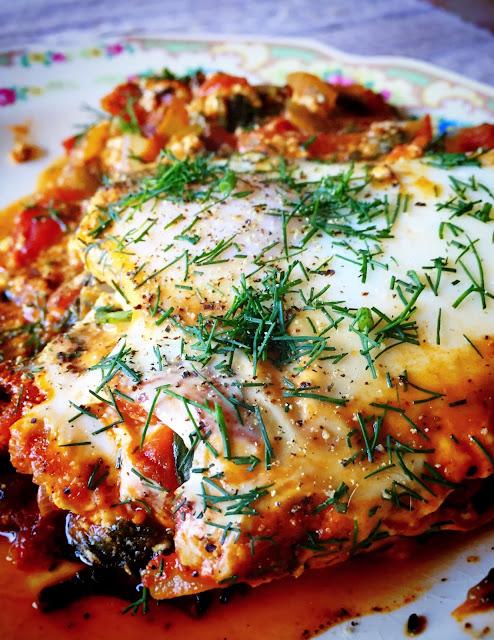 From Tara Brady's Seven Spoons, these baked eggs  have some complicated spice mixtures. It is similar to shakshuka, and I can get behind anything that pairs eggs, tomatoes, and spices.

When I was young, I used to make scrambled eggs with every spice imaginable from the spice drawer.  Who says oregano, garlic salt, tarragon, red pepper flakes, chili powder, and dill do not go together? Then I would feed them to my seven-year-younger sister. She probably had a better palate than mine, for she turned away from those concoctions. Had I been able to make something like this, perhaps she would have liked them more. 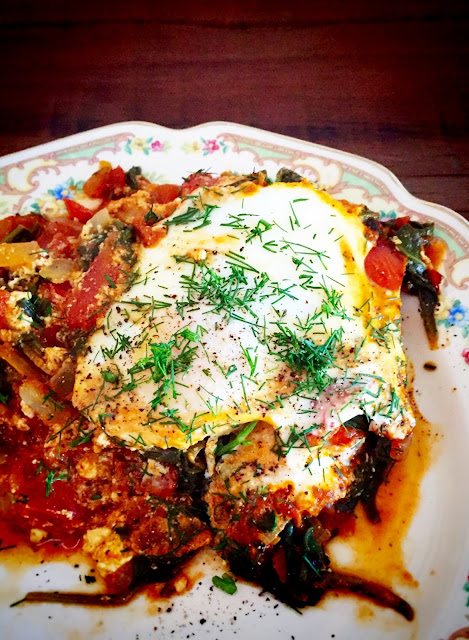 This is a relatively easy, Tuesday-night kind of dinner and doesn't require a lot of fuss or precision. Lord knows I am not great at timing eggs (you can even tell in the pictures that they are a little over cooked, in part because the husband prefers a hard-cooked egg and I prefer a runny egg. He won out.). They still turned out tasty and satisfying.

A few things to note--O'Brady suggests serving with some combination of toasted almonds, fresh green chutney, minced fresh chile and lime wedges. I didn't include them below. I used the fresh dill she suggested. Also, she asserts that some baby spinach, baby kale, or pea shoots would be fantastic with this. I mixed in about 3 handfuls of spinach into the dish itself, just to tuck in some more veggies. Trust her assertions. 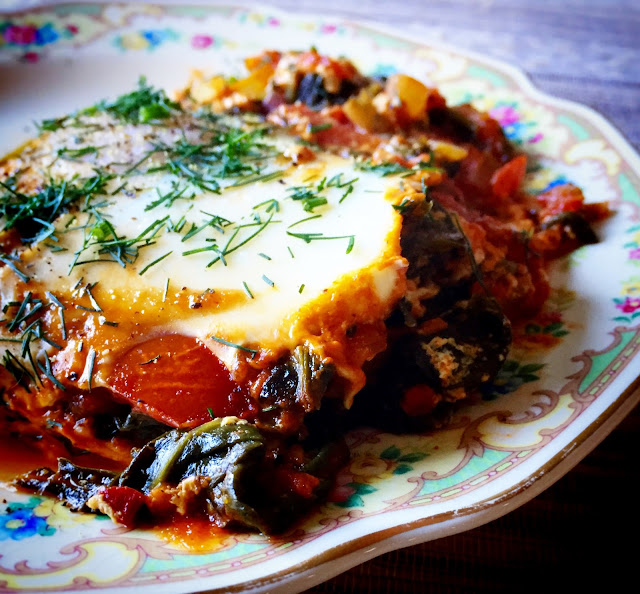 Now I hope things become a little less complicated, and we can settle in a bit this summer. I am ready for backyard barbecues and rose on the deck. Are you with me? 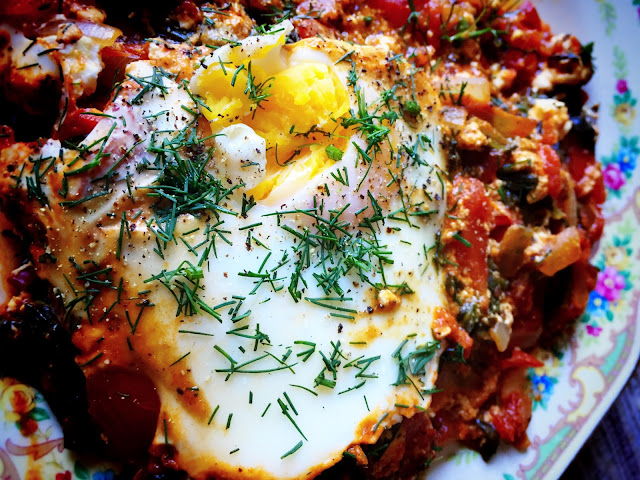 1. To make the eggs and sauce, in a large, ovenproof skillet over medium-low eat, melt the butter or heat the olive oil. Sauté the cumin seeds, shaking the pan often, until the cumin is fragrant, about 1 minute. Stir in the onions and cook until golden brown, 10-12 minutes.

2.  Pick the leaves from the cilantro and set aside. Mince the cilantro stems. When the onions are cooked, add the cilantro stems and garlic, and cook for 2 minutes more. Add the garam masala, coriander, turmeric, and chile powder, and stir constantly to toast the spices for about 30 seconds.

3.  Pour in the tomatoes and their juices and add the bay leaves. Raise the heat to bring to a boil. Then lower the heat to a simmer. Cook for about 20 minutes with occasional stirring. Season with salt. Add the spinach and cook until wilted, about 2-3 minutes.

5.  Dollop the yogurt into the sauce, then use the spoon to marble the sauce and yogurt together slightly. Create small wells for the eggs with a spoon, and crack the eggs, one by one, into the wells. Season with salt and pepper.

6.  Bake the pan in the hot oven, uncovered, until the eggs have reached the preferred set. It takes about 12 minutes for a firm-set white with a loose yolk. Serve immediately, sprinkled with the reserved cilantro leaves and dill. You can also serve with a grain (brown or white rice, barley).